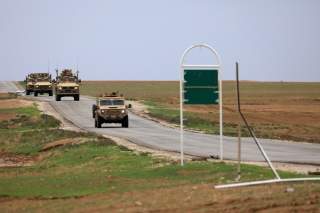 Is Donald Trump really going to pull American troops out of Syria? “We have defeated ISIS in Syria, my only reason for being there during the Trump Presidency,” Trump tweeted today, without much elaboration. Earlier in the morning, he complained that “so much money has been poured down the drain, for so many years.”

Several outlets carried news of a such a move Wednesday morning. A Department of Defense statement issued a minute before the presidential tweet read only: “At this time, we continue to work by, with and through our partners in the region."

Those advocating for a withdrawal from Syria were quick to note that the president has teased such a move before.

Most recently, in the spring, French President Emmanuel Macron boasted that he “convinced” a recalcitrant Trump from pulling out, something the American leader had floated, before a crush of new chemical attacks in the war-torn country.

But the relationship between the White House and Elysee has since deteriorated.

A veteran conservative operative close to the White House told me that the president needs to shift the conversation away from the Mueller inquiry as well as to throw his base a bone. “He’s wagging the dog in reverse. Pulling out of a war to change the news cycle. Wall cave is really bad,” he said.

But foreign policy restrainers also made clear they are willing to jump in to the president’s defense if he pursues their favored course—and the one he largely campaigned on.

“The president's willingness to end this war is a welcome return to some of his campaign rhetoric,” Benjamin H. Friedman, senior fellow at Defense Priorities, told me.

“Will be interesting to see what foreign policy restrainers say IF [the president] gets us out of Syria,” said William Ruger, vice president for research and policy at Charles Koch Institute, on Wednesday.

It’s been a bracing few days for this contingent. Critics of the Yemen war just scored a major victory last week on Capitol Hill. At the same time, the new acting White House chief of staff, John Michael “Mick” Mulvaney is a friend of foreign policy restraint and a longtime supporter of Sen. Rand Paul. "I am happy to see a President who can declare victory and bring our troops out of a war. It’s been a long time since that has happened," Paul said Wednesday.

Ruger asks, very preliminarily, what if an embattled Trump “propels successful peace efforts on Korean peninsula, [and] gets greater burden-sharing from our wealthy European allies - while holding off pro-Iran war crowd”? To be determined.

Conversely, a separate contingent that Trump has mostly thrilled during his presidency—the Iran hawks—was quite distressed on Wednesday morning.

“Trump considering a complete implosion of his own Iran policy,” remarked Jonathan Schanzer of the Foundation for the Defense of Democracies (FDD), the administration’s go-to think tank on Iran. The regime in Tehran along with Russia and Lebanese Hezbollah help underwrite the security of Syrian president Bashar Al-Assad’s forces.

And relatively new, but largely steadfast allies of President Trump, such as Sen. Lindsey Graham, joined the criticism, equating Trump with his predecessor.

“Withdrawal of this small American force in Syria would be a huge Obama-like mistake,” the senator from South Carolina said. And Trump continues to be ensnared by the hawkish advisors, somewhat paradoxically, he himself appointed. "Trump's apparent decision also shows his distance from his top advisers,” Friedman told me.

Going forward: the war, as ever, is raging for the president’s mind.