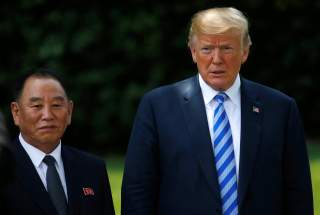 When discussing the possibility of military action on the Korean Peninsula, it has long been an article of faith that in the event of any serious conflict North Korea would simply destroy Seoul (for example here and here). Some suggest even the smallest military action would lead to a precipitous conflict. These ideas have hobbled efforts to negotiate a lasting peace with North Korea: the Kims never needed to fear for their safety, even as the United States and South Korea performed backflips attempting to assure them of the same. The time is ripe to rethink these assumptions.

Today, we see North Korea rapidly arming itself to threaten a group of vibrant, democratic nations. Once Kim possesses a suitable quantity of nuclear weapons and the means to deliver them, what will deter him from taking a more aggressive stance towards the West? Can there be any compromise between these two poles? The authors believe the answer is "yes," but only if the United States and its allies are ready to stand firm and take the difficult road of being willing to use force to hold Kim to his promises.

Kim is showing some sign of responding to the U.S. pressure campaign, although we have yet to see what it might take to loosen his grip on nuclear weapons. Considering the Kim family's indifference to the suffering of North Koreans, it seems that threats short of force would prove little more than an annoyance. Thus the threat of force must be on the table if we are to expect any concessions from Kim. But does this mean America must either go to war or accept North Korea as a nuclear power?

If Kim is rational and seeks regime survival, then the answer is, "No, he can continue to rule without nukes." But if he insists on possessing nuclear weapons at any cost, then it should be apparent to us that these weapons are an offensive tool of coercion, a coup that will enable North Korea to become a bigger bully. Either way, the next step is to make clear to Kim that if he denuclearizes, he may live. But continuing his quest for nuclear weapons will bring with it serious, negative consequences that will leave him far worse off than if he had cooperated.

Those potential consequences must include precise military actions with limited objectives, using carefully measured force to disable Pyongyang's threats without destroying its regime. Such a campaign constitutes the ultimate threat of force short of regime removal, the proverbial big stick. It is not something we boast of and certainly nothing we ever wish to use. But let us quietly affirm - just between Kim and us - if we need it, it is there.

Some suggest that even a small, symbolic strike would provoke Kim to use the most extreme force available to him. In the case of “flattening Seoul” with artillery, there is significant doubt about the real threat posed by the North’s dated systems (here and here). And the idea that a nuclear assault would be Kim’s response to even a symbolic strike is either absurd - in that it would lead the United States to end his regime forever - or else an indication that Kim might launch without any provocation at all. Either way, the United States must keep the threat of force on the table to maximize our chances of moving North Korea in the right direction.

Chinese news sources have hinted Beijing may remain neutral if the United States does not seek regime change. After tolerating North Korean deceit, harassment, and outright murder for over sixty years, the world should know that the United States and its allies do not mean to destroy the Kim regime. It is vital for all parties to understand that the United States, while insisting on total, verifiable, and irreversible denuclearization, also believes that with proper incentive North Korea may yet accept peaceful relations with its neighbors, which would be preferable to the chaos of a precipitous collapse. Perhaps one day the North may even join with its Southern compatriots in our greater community of shared values and prosperity.

With the prospect of peace on the horizon as well as the shadow of serious consequences, Kim should understand that the power to preserve his rule lies in cooperating with America. Let's hope the message gets through.

The views expressed are the authors’ own and do not reflect the official policy or position of the U.S. Air Force, Department of Defense, or the U.S. Government.

Col Jim Sturgeon (USAF) is director of the U.S. Air Force's Checkmate strategic studies office. He previously commanded the U.S. Air Force 8th Operations Group, among a string of key assignments. He is a master combat pilot and air strategist.

MAJ Ben Lowsen (USA, ret.) is China Strategist for the U.S. Air Force’s Checkmate office. In addition to numerous publications and speaking events, he is a retired U.S. Army officer who has served previously as Assistant U.S. Army Attaché in Beijing and Asia advisor to the U.S. Navy.

Image: North Korea's envoy Kim Yong Chol poses with U.S. President Donald Trump for a photo by an official photographer as he departs after a meeting at the White House in Washington, U.S., June 1, 2018. REUTERS/Leah Millis