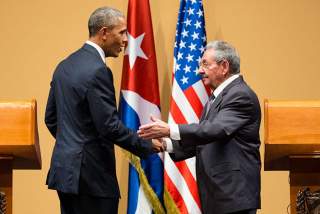 If “America First” means anything, it must mean preventing a virulently anti-American criminal enterprise from perpetuating its existence next door and reproducing itself throughout the hemisphere. And since this is precisely what President Obama’s opening to the Castros accomplished, President Trump is duty-bound to reverse this mistake.

In fact, if The New York Times is to be believed—and on this we should, as coddling the Castros is one thing the Gray Lady has been consistent on for sixty years—the administration is about to announce it is reinstating the limits on travel and trade that Obama lifted.

This isn’t full reversion, but I’ll take it. I don’t say this very often, but let’s hope The New York Times is right.

President Obama always said he was helping Cubans with his opening, and in a technical way that is true. Alejandro Castro Espin, the ideologically unbending Leninist son of military ruler Raul Castro, is a Cuban. So is Gen. Luis Alberto Rodriguez Lopez Calleja, the economic czar in charge of the lucrative tourist trade. Oh, Lopez Calleja is also General Castro’s son-in-law and Alejandro's brother-in-law.

U.S. recognition and sanction of the Castros helped these two Cubans enormously in their endeavor to inherit political and economic control when General Castro, a spry eighty-five-year-old man, effected a transition from one communist Castro to another in a short nine months.

Cuba’s eleven million other citizens were not helped so much. They would have had a much better hope of a real transition to a post-communist, post-Castro, free Cuba had President Obama not promised that, in exchange for nothing, the Castro dictatorship would benefit from selling their products in the United States and receiving credits to boot.

With Cuba’s international benefactor, Venezuela’s own despotic government, teetering on the brink of collapse, the Obama lifeline to the Castro family looms even larger.

People with zero understanding of Cuba have always parroted the Godfather stereotypes, so let’s put things in a language they’ll understand.

Raul is Don Corleone in this version, while Alejandro is Michael Corleone, and Lopez Calleja is Tom Hagen. Sonny and Fredo are played by any number of Miami Cuban-Americans with business interests tied to this division of the spoils, the freedom of their former compatriots be damned.

Alejandro is widely expected to pull the strings of power when and if the nominal heir apparent, Miguel Diaz-Canel, first vice president since 2013, takes the title of president from Raul in February 2018. There are precedents for this in the revolution and earlier Cuban history.

Cuba’s president from 1959 to 1976 wasn’t Fidel Castro, but a wealthy lawyer by the name of Osvaldo Dorticos Torrado, a nonentity who committed suicide in 1983. From 1936 to 1940, the Republic’s official head of state was Federico Laredo Bru, another wealthy lawyer whose strings were pulled by Fulgencio Batista.

Both Dorticos and Laredo Bru associated with communists and let them take part in government (yes, little-known fact: Batista was such a communist sympathizer that even Stalin’s Chilean hagiographer, Pablo Neruda, once wrote a poem to him). But before reading these lines, had you ever heard of either of Dorticos or Laredo Bru?

This window-dressing fate awaits Diaz-Canel. Journalists are now besoiling themselves by claiming all sorts of things about him. Six months ago, Reuters said he “has already established press and internet freedom as signature concerns.” It is often written that he’s a Beatles fan (the way Andropov liked jazz).

Probably better to listen to what Alejandro Castro says and watch what he does. This is admittedly onerous, as he’s a humorless Marxist ideologue who would apply a dialectical analysis to a doughnut. But if you’re interested in what’s ahead for Cuba, there is, alas, no alternative.

“Cuba will never return to capitalism,” the reclusive Alejandro, officially an army colonel and the head of military intelligence, told Peruvian-Greek journalist Lasonas Pipinis Velasco in a sweeping 2015 interview.

In it, he applied “the logic of history” to everything from the serfs of the Middle Ages to John Locke, Bretton Woods and the distinction between “participative democracy” and “bourgeois representative democracy.” (He says Cuba practices the former because it constantly holds “popular consultations.”)

A bit earlier, it was Alejandro, not Diaz-Canal, who conducted the secret negotiations on the opening with Obama’s outmatched deputy Ben Rhodes in 2014. It was also Alejandro who received the Cuban spies charged with the murder of Americans whom Obama obligingly sent to Havana in 2015. More recently, it was Alejandro who sat next to Obama at the table when the forty-fourth president visited Havana. And it was also him who accompanied Raul for the 2015 meeting with Pope Francis.

And again just recently, it was Alejandro again who popped up in Moscow negotiating, of all things, an agreement on cybersecurity cooperation with the head of the Russian Security Council, Nicolai Patrushev.

Known in hushed tones in Havana as “One Eye” (El Tuerto) after losing most of his sight in one eye in Angola, Alejandro has also left his feelings for the United States known in the book he wrote about America’s rise, “The Empire of Terror.”

According to the The New York Times, the Trump administration is reportedly considering measures proposed by Florida Republicans Sen. Marco Rubio and Rep. Mario Diaz-Balart that would block deals between American companies and the Cuban military—measures that would hit the Castro family where it hurts.

Mike Gonzalez is a senior fellow in the Davis Institute for National Security and Foreign Policy at The Heritage Foundation.