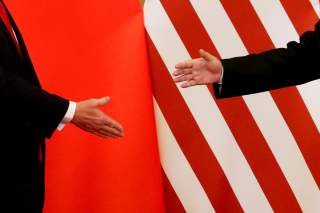 Policy specialists think in terms of plans and solutions, which are much tidier and more orderly than real-world conditions can possibly produce; they, like me and other supporters of President Donald Trump’s broad approach to China trade issues, are regularly appalled by the signs of internal contradictions, naivete, sloppiness, incoherence, and plain confusion which regularly appear in his administration.

One day the president and his aides are optimistic, the next day they are pessimistic, and the day after that they send mixed messages. Sometimes they emphasize cutting the immense bilateral trade deficit. Sometimes they suggest halting Chinese practices that systematically favor Beijing entities over foreign economic entities and steal or extort the latter's intellectual property—the so-called structural issues in the talks. Occasionally they tout imminent celebratory Sino-American signing summits with pomp and circumstances and triumphantly clink glasses. Occasionally they hint that Chinese leader Xi Jinping has many concessions to make to avoid humiliatingly returning home empty-handed. Like most administrations, the Trump administration features private quarrels about strategies and tactics. Unlike most other White House administrations, these quarrels are often taken into the public eye.

Could a less promising formula for anything resembling a U.S. success be conceived?

Unfortunately, the world—and especially world affairs—is rarely tidy and orderly; the academics, think-tank types, and pundits could be clinging to expectations that are utterly unrealistic and using yardsticks that are equally irrelevant, especially for a proudly norms-busting chief executive. Thus, the overhaul of U.S.-China trade relations promised by Trump may be as contradictory, naive, sloppy, incoherent, and confusing as its pursuit. Still, it could be highly effective and thoroughgoing despite all the chaos.

For example, even if this initial cut at a new U.S.-China trade regime lacks the comprehensive sweep, airtight terms, elegant new institutional arrangements, and scrupulously impartial enforcement mechanisms policy specialists prize—and even if there's no deal at all for the time being—Trumpian tumult and its likely continuation seem bound to keep spurring progress toward several objectives that are crucial economically and thus strategically for America.

First, Trump has established considerable credibility by imposing tariffs on $250 billion worth of Chinese goods last year. As a result, the Chinese, and anyone doing business with them, are aware that recently suspended tariff increases—leveraged to improve chances of an agreement—could soon be approved, and that broader levies might be on the way. Democratic leaders have made recent oft-voiced warnings about China’s long record of ignoring commitments and the consequent need to press for the strongest possible terms in any deal and the toughest possible enforcement mechanisms, which have been extremely helpful in this regard.

As a result, China’s largely unregulated super-low-cost market, which sells to America’s high-price market, will continue to lose appeal in favor of other supply bases. Penny-wage developing countries, such as Vietnam and Mexico, seem sure to win the lion’s share of the shifted production and jobs. But relatively high productivity levels and low transportation costs and lead times will work in America’s favor too. Other Trump tariffs will be equally beneficial, like those in the new U.S.-Mexico-Canada Agreement (the NAFTA rewrite) on Mexican-made automotive products (and especially on motor vehicles containing lots of Chinese-made parts) once they top certain annual levels. Further, any manufacturing leaving China due to U.S. tariffs—whether it winds up in America or not—serves U.S. interests by weakening the Chinese economy (and by extension military potential), underscoring American leverage in future dealings.

Second, the Trump administration will almost certainly continue restricting both Chinese direct investments in American companies and entire industries with defense-related implications, and slow the flow of advanced U.S. technology to China. As with using tariffs for enforcement, these national-security-focused curbs enjoy strong bipartisan support. And although the president has for now shelved plans to broaden Executive Branch authority to bar private U.S. companies from doing businesses with Chinese tech giants like ZTE and Huawei (on top of an existing ban on federal government purchases), the latter still faces sanctions-busting charges. In addition, the possibility that the operations of these tech giants will be further disrupted will no doubt limit their prospects in the American market.

Third, expect an ongoing—and possibly even accelerating—shrinkage of China's presence in American society. Espionage concerns could soon greatly staunch the flow of Chinese students to U.S. colleges and universities and Chinese scientists to research jobs at American companies. China’s Confucius Institutes are already being kicked off U.S. campuses by administrators who are worried that they’re nests of spies and conduits for Beijing’s propaganda. And English-language TV station CGTN is the first of what could be many Chinese government-run media organizations operating in the United States that must register as a foreign agent with the Department of Justice and disclose its government ties on broadcasts and publications.

The net result will be an America moving ever faster—though hardly in a straight line—toward what is now clearly the only reasonable goal left for its China policy: economic disengagement. Think of it as the long overdue ending of one of recent history’s most grandiose experiments. Decades ago, U.S. leaders decided on the need not only to end China’s global isolation, but tightly integrate the two economies. Their aim, according to a memorable George W. Bush-era formulation, was to turn the People’s Republic of China into “a responsible stakeholder” in “the international system.”

Now even many of Beijing’s former American champions admit that the experiment has failed, citing China’s return, after a period of selective reform, toward renewed state domination of the economy, along with greater political repression and international belligerence. It is tempting to hope that a reasonably well-crafted trade deal will begin solving these problems and permit bilateral commercial ties to remain at about their current scale—and eventually resume expanding. Unfortunately, the likely insurmountable challenge of policing China’s highly secretive regime leads to the opposite conclusion. Beijing’s transgressions will be difficult to identify, let alone sanction, thus preserving any semblance of the economic status quo risks permitting major threats to American security and prosperity to continue growing.

The unwinding that’s consequently needed won’t happen nearly as quickly, or be targeted and sequenced as strategically, or wind up nearly as complete as critics will want it to be. Here’s hoping, though, that public grousing will help keep the president on his current track rather than steer him in the wrong direction.