Trump Won the Midterms. Here's Why. 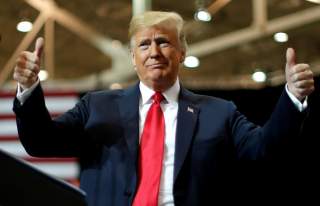 Blue wave, schmoo wave. By any historical measure, Democrats stumbled in midterm elections, ceding several Senate seats and gaining only a precarious hold of the House of Representatives. The outcome positions President Trump to win reelection in 2020 while carrying both houses of Congress into a second term.

It looks like Republicans will end up with 54-55 Senate seats, up from 51 in the outgoing Congress, and Democrats will have a thin majority in the House

Democrats who predicted a wave election that would hamstring Trump had history on their side but failed to deliver.

More stunningly, Trump’s party gained Senate seats—lots of them. That seldom happens. There is, however, one recent exception. In George W. Bush’s first midterm, which took place a year after 9/11, the Republicans gained two Senate seats.

The historical first midterm that 2018 most resembles is that of Richard Nixon in 1970 when Republicans lost twelve House seats but gained two Senate seats. Nixon went on two years later to win overwhelming reelection.

In the Senate, Trump will have not only a larger Republican majority but a much friendlier one. Gone are anti-Trump Republicans Bob Corker, Jeff Flake, and John McCain. Their replacements mostly accept the direction Trump has taken the GOP, as do their colleagues who flipped Democrat-held seats.

A larger Senate Republican margin will make everything easier in that chamber, from passing bills to confirming nominees for the executive branch and the courts. Trump now has a free hand to replace departing officials with the men and women he prefers.

As for the House, incoming Speaker Nancy Pelosi will have a difficult task managing an unruly Democratic caucus with little margin for error. Without the Senate, Democrats cannot advance legislation on their own and force Trump to cast embarrassing or unpopular vetoes that might hurt his chances in 2020. Furthermore, they have no choice but to pass budgets or be accused of shutting down the government.

Trump has already gotten most of what he needs regarding legislation to get reelected. He recently mused about another tax cut for the middle class and wants funding for a border wall. But congressional inaction on these popular initiatives will become a helpful issue in Trump’s reelection.

Pelosi could try to stop trade bills that might be headed her way, including the U.S.-Mexico-Canada Agreement that will replace NAFTA. But Trump can force action by withdrawing from NAFTA, leaving Congress little choice but to pass to compromise. Moreover, Pelosi must worry about losing the many Democrats who favor reforming trade.

There is little doubt House Democrats will go into overdrive with investigations of Trump, using their newfound power to hold hearings and subpoena witnesses. However, this hyper-focus on scandals is one of the reasons Democrats failed to win the Senate. Americans are seldom motivated to change voting habits because of scandals, especially false ones like the Russia collusion. It will seem like Democrats are stuck relitigating Trump’s 2016 election, rather than advancing appealing legislation.

More broadly, the midterm result will preclude what Democrats need most: a period of introspection and a realization that they must moderate if voters are ever to trust them with broader power. Instead, the progressive wing of the party will claim victory and insist on the nomination of a radical to face Trump in 2020. In that way, the midterms couldn’t have played out better for Trump.