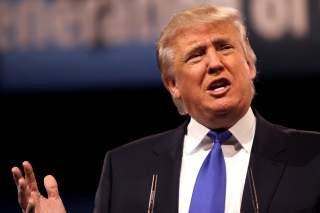 When paradigms begin to shift and the prevailing Zeitgeist starts to implode, using common terms to describe the changes taking place becomes an exercise in futility. The world before and after Darwin or Einstein looks very different.

It’s too early to figure out whether President Donald Trump would change the world as we know it, as some hope and others fear. In historical perspective, Franklin Roosevelt did just that by creating the modern welfare state. Ronald Reagan made a difference; but he then left the welfare state in place.

It’s more likely than not that the American political system, with its checks and balances and the country’s dynamic civil society, would make it close to impossible for the new president to launch a political revolution, assuming that is what he wants to do. And he probably doesn’t. If anything, Trump the businessman and dealmaker is the epitome of pragmatism — a very American tradition.

More likely, Prime Minister Mike Pence will ensure that members of the Republican establishment, including those #NeverTrump types gradually find a place in Trump’s Washington. And that includes several of the Republican presidential candidate’s neoconservative critics, who would explain, “When the President asks you to serve your country, you do.” (A simpler explanation: “I have to pay my bills.”)

Even when it comes to foreign policy, where our Imperial Presidents can make a difference, some doubt whether the next president would really turn the nation in a more (pick your label) nationalist, unilateralist, protectionist, isolationist direction in a way that would lead to the collapse of the liberal international order.

History is on the side of the skeptics. As the Great War was raging in Europe in 1916, President Woodrow Wilson was campaigning for re-election, pledging that he would not draw the United States into the hostilities across the Atlantic, expressing his commitment to “the true spirit of neutrality, which is the spirit of impartiality and fairness and friendliness to all concerned.” A year later, President Wilson led the United States into a military intervention in Europe on the side of Great Britain and France and against Germany and its allies.

In 1940, a time when Germany and Japan were in the process of pursuing their aggressive policies, President Franklin Roosevelt promised voters during his re-election campaign that he would do everything in his power to keep the United States out of war, insisting that American soldiers were “not going to be sent into any foreign war.” After the Japanese attack on Pearl Harbor in 1941, he sent American troops to fight in Europe and Asia.

During the 1992 presidential campaign, Democratic nominee Bill Clinton, accused then Republican President George H.W. Bush of “coddling the dictators in Beijing” following the Tiananmen Square events and pledged that he would punish and isolate them. A few years later as president, he became the driving force in the effort to normalize U.S. trade relations with Beijing and to bring China into the World Trade Organization (WTO).

President Bush’s son ran for the presidency in 2000, criticizing the strategy pursued by then President Clinton to spread democracy worldwide and engage in “nation building.” George W. Bush promised to embrace more “humility” in the conduct of U.S. foreign policy, only to end up after the 9/11 terrorist attacks presiding over an ambitious policy of democratizing the Middle East and doing a lot of nation building there.

Politicians make a lot of policy commitments during presidential election campaigns, some nothing more than attempts to pander to different constituencies. But some of these pledges can be quite significant and taken seriously.

Indeed, American voters in 1916 and 1940 elected as president men who vowed to keep them out of the bloody wars across the oceans. The Chinese were very worried in 1992 that President Clinton would try to reverse the policy of diplomatic and economic engagement between the two countries.

Certainly no one in his right mind imagined that President George W. Bush, who had no experience in foreign policy and national security and who affirmed the need for humility in dealing with other countries, would eventually decide to launch two major costly wars and invade two large countries in the greater Middle East.

And veteran Washington observers will probably recall the international hysteria that followed the election of Republican Ronald Reagan as president in 1980. Officials in world capitals feared that the former Hollywood actor who had been a staunch advocate of extreme right-wing foreign policy causes would draw the United States into a nuclear war with the Soviet Union. Instead, the new White House occupant ended up presiding over the end of the Cold War. Oops…

In short, a presidential candidate’s bombastic campaign statements on foreign policy, which, in post-election instant analysis, tend to be inflated by pundits as the new president’s foreign policy “doctrine,” end up crashing into reality in the form of this or that international crisis.

The president, as part of the policy and legislative making process in Washington, and the United States, as a member of the nation-state system, remain dependent variables. Under certain conditions though, like in the aftermath of Pearl Harbor and 9/11, they can become more powerful. U.S. presidents can dramatically transform policies and a militarily and economically powerful United States can be in a position to change the world.

But notwithstanding all the hysteria among western pundits and policymakers, the world isn’t in the midst of a historic crisis, and it is probably more stable than it was in the 1960s and 1970s when American presidents took steps to adjust U.S. interests and policies to changing international realities.

President Richard Nixon responded to U.S. international setbacks through a cautious policy of military retrenchment and diplomatic adjustments, while President Ronald Reagan took steps to counter the perception of American global weakness through a military buildup and more diplomatic activism.

Some observers forget that it was under President Jimmy Carter that America started embracing elements of the kind of foreign policy that was associated later with Reaganism. Carter the retrencher turned, in the last part of his term, into Carter the activist.

Similarly, while some have compared President Barack Obama’s policy of retrenchment to that of Carter’s, we need to remember that it was President George W. Bush who initiated that policy in his second term in office, by, among other things, reaching the agreement to withdraw U.S. troops from Iraq that Obama ended up implementing. Similarly, George W. Bush, like Obama, resisted pressure to use military force to destroy Iran’s nuclear sites or respond to Russia’s aggressive behavior in Georgia.

From this perspective, many of presidential candidate Trump’s foreign policy proposals during the election campaign weren’t really so different from those promoted by Obama, at least when it came to issues of war and peace.

Like the former Senator from Illinois, Trump had opposed the Iraq War and the neoconservative fantasies to democratize the Middle East and engage in wasteful “nation building.” He blasted America’s allies as “free riders.” And notwithstanding his tough rhetoric, Obama continued pursuing a policy of engagement with both Russia and China.

What separates Obama and Trump aren’t policy prescriptions per se. Obama has remained committed to the liberal internationalist dogma that has dominated Washington since the end of the Cold War, flirting for a while with the Arab Spring and buying into Hillary Clinton’s humanitarian interventionist Libya policy disaster while criticizing Moscow and Beijing for violating international norms.

In some ways, Obama and Trump were reciting the same song in terms of challenging the internationalist axioms of the foreign policy establishment, especially in the Middle East. But their music sounded different, with Obama continuing to play on the internationalist keyboard, for example, by playing kumbaya and refraining from using the term “radical Islam,” as opposed to Trump’s nationalist melodies that sounded as though they belonged in the Clash-of-Civilization opera.

Hence what could distinguish the two president’s foreign policy is not necessarily their respective modus operandi, but the intellectual frameworks under which they operate when approaching the world. Obama was forced to defend his decision not to deploy U.S. troops into Syria and not to assist the Islamist guerrilla fighting Bashar Assad. He refrained from drawing the Americans into another humanitarian intervention that could end up as a military quagmire. President Trump would present the same decision as being aligned with U.S. national interests. He won’t have to apologize to the interventionist pundits and thinkers in Washington who are bound to bash him as an “isolationist” who lacks humanitarian sentiment.

This may not amount to a full-blown paradigm shift, but in addition to “isolationism,” many of the terms employed in the current foreign policy discourse, like, say, “hawks” and “doves” might need to be revised. Trump could demonstrate that you can support a major military buildup while refraining from using it as the first resort in responding to international crisis. You can impose restrictions on the flow of immigrants from Muslim countries while rejecting the notion that it is the U.S. responsibility to invade and export democracy to those same countries.

But perhaps the most significant change that could occur through the pursuit of TrumpPolitik would be a shift of focus from the concerns of the amorphous “international community” and the tenets of globalism, to concerns centered on advancing U.S. interests. Most important in this context would be an assessment of relationships with other governments based on whether they help or hurt the United States, irrespective of whether these countries’ conduct aligns with some liberal internationalist doctrine.

TrumpPolitik would certainly place more emphasis on strengthening U.S. relationship with the big powers of the world, notably China and Russia, a la the Congress of Vienna system, as well as with regional “influentials” like Turkey, Indonesia and Brazil. Instead of allowing the governments of Southeast Asia to play China and the United States against each other, Beijing and Washington could negotiate above their heads and reach agreements that those governments would have to accept.

Similarly, the United States has no interest to be drawn into the nationalist and ethnic rivalries of East and Central Europe. That was not why NATO was established in the first place, and there is a certain element of Chutzpah on the part of Germany and other European countries in trying to get the United States involved in their territorial disputes with Russia, while they continue to maintain their bloated welfare states and resist raising their defense budgets.

But it’s in the Middle East where TrumpPolitik could prove to be the most effective, if, instead of engaging in new crusades to spread democracy, Washington works together with the main regional powers to restore the status quo and maintain the territorial integrity of states like Iraq and Syria, even if that means cooperating with unsavory autocrats and denying independence to the Kurds while placing the Palestinian issue on the policy backburner.

These kinds of policies would probably be decried by the usual suspects in Washington as being “cynical” and contrary to American values, the same foreign policy elites that got the United States into the current mess in the Middle East and elsewhere. But with the collapse of the Houses of Bush and Clinton, and the intellectual bankruptcy of the mainstream media and the political pundits, President-elect Trump has a mandate from the American people to change the foreign policy course. Or at least try.