Trump's 2020 Opponent Isn't Joe Biden or the Democrats, It's Coronavirus 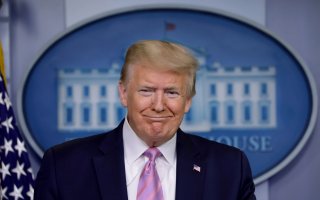 This is Joe Biden’s moment.

With the suspension of Bernie Sanders’ campaign, he has now vanquished the entirety of the biggest Democratic presidential field in memory. He leads President Donald Trump by nearly 6 points nationally and is ahead in the key battleground states of Pennsylvania, Wisconsin and even Florida (all according to the RealClearPolitics polling averages). An early April CNN poll has Biden above 50 percent of the vote nationwide.

It appears that the third time may be a charm, 32 years after Biden’s first bid for the Democratic nomination. The former vice president will soon have the blessing of the man who kept him from dying a senator—or, as Trump prefers to put it, “took him off the trash heap"—ex-President Barack Obama.

The question is whether this is the beginning of a sustained Biden bounce or something closer to its peak. These are somewhat ideal conditions for the 77-year-old candidate. The nation is in the midst of a pandemic that has become more serious despite Trump’s early assurances it would soon disappear. Widespread business closures to slow the spread of the coronavirus have aborted the economic boom, triggered millions of new jobless claims and show no sign of ending anytime soon. The public’s confidence in Trump’s handling of the crisis, always lower than enjoyed by many other Western leaders and U.S. governors, is slipping.

Yet even amid all that, there are warning signs for Biden. Trump’s numbers haven’t slipped to the levels of George W. Bush during Hurricane Katrina, much less the financial meltdown. They may continue to fluctuate rather than move inexorably downward. The latest Fox News poll—not as friendly to Trump, as he will be the first to remind you, at some of the network’s opinion programming—shows the president’s job approval rating rebounding to 49 percent and has him tied with Biden at 42 percent apiece.

Most disconcerting: The same Politico/Morning Consult poll that shows Obama easily beating Trump on who would be a better leader during the coronavirus by 52 percent to 38 percent has the public favoring Trump over Biden on the same question by 44 percent to 36 percent. This is the type of straight referendum question on which Biden needs to best Trump without question if he is to become the next president.

“Referendum” is the keyword. Biden is best equipped to win if the electorate views November as a straight up-or-down vote on Trump’s presidency. If Trump is able to turn this into a binary choice, as he did with Hillary Clinton (who frequently led in the polls at this stage of the campaign and even later), Biden’s victory is less assured.

Perhaps that will be more difficult to do with Trump as the incumbent than as an unknown quantity compared to Clinton. Biden is resting a lot on hopes that Clinton assumptions that proved wrong when Trump was a quasi-challenger—that the Democrats could gin up Obama-level enthusiasm among millennials and minorities without Obama himself on the ballot based on antipathy toward Trump alone—will be correct now that he sits in the Oval Office. And the coronavirus may indeed aid Biden’s argument that what is needed right now is normalcy, delivered by a more conventional president.

The bottom could yet drop out for Trump. It could also be the case that the election takes place after at least the partial reopening of the economy but before any second wave of the virus; after a more or less normal Republican convention and a truncated or unusual Democratic one; that the get-out-the-vote challenges posed by the pandemic hurt the Democrats more than the Republicans. Nobody really knows.

Biden appeared doomed but waited patiently for his South Carolina restoration. Sanders had bet he could keep winning with pluralities thanks to a large, fractured field and that Democrats in Milwaukee would be forced to acquiesce to his nomination or risk his supporters defecting en masse. Sanders was wrong and Biden was, ultimately, right.

Obama’s two-term vice president could continue to be right, or lucky, throughout the general election too. But this is now a campaign substantially out of either candidate’s control, and as someone without a current government position, out of Biden’s control most of all. Trump’s main challenger isn’t the Democrats. It’s the coronavirus.