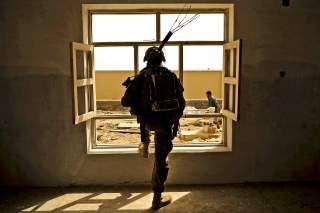 The White House may hope that targeting the Taliban in its safest space could scare it into joining peace talks. This hope, however, might be misplaced. Hits on the Taliban leadership could embolden, not enfeeble, the organization and prompt it to step up its fight on the battlefield.

Also, if the group’s leadership feels sufficiently vulnerable in its Pakistani sanctuary, it could simply relocate—perhaps to Iran, a nation that’s provided support to the Taliban over the years. Like Pakistan, Iran has played a double game in Afghanistan—it has cooperated with Kabul while also colluding with the Taliban. When Mansour was killed in Baluchistan, he was returning from a trip to Iran. Given the toxic relationship between Tehran and Washington today, Iran may well be willing to serve as host—as risky as such a move would be.

In effect, when it comes to using force to get the Taliban to sue for peace, success is far from assured. And yet, a diplomatic track doesn’t appear any more viable, in great part because the Taliban’s battlefield gains give it little incentive to stop fighting—no matter how much Kabul, Washington, Beijing or other key state actors may try to convince the Taliban otherwise. Additionally, the State Department, which would presumably lead a reconciliation strategy, has been marginalized by a Pentagon ensconced in the driver’s seat of Afghanistan policy, thanks to Trump’s decision to delegate authority for troop-level decisions to Mattis. Tellingly, reports have emerged that the State Department’s Office of the Special Representative for Afghanistan and Pakistan could be eliminated.

Administration officials may counter that their new strategy will ensure plenty of time to think this all through and eventually get things right, because it will emphasize an open-ended, long-term military deployment in Afghanistan. Unlike Obama’s policy, there will be no timeframes or deadlines.

And yet, the basic parameters of the emerging new plan—building up Afghan security forces, enlisting Pakistan’s support to eliminate Taliban sanctuaries, coaxing the Taliban to the negotiating table—reflect the same elusive goals in place for the last sixteen years. The Trump administration’s open-ended commitment to Afghanistan effectively buys America more time to keep making the same mistakes. The strategy risks being little more than old wine in new bottles.

This isn’t to suggest it’s time to throw in the towel. On the contrary, America should go all-in on Afghanistan, and with a four-pronged strategy. First, provide military support—not just more troops for the training mission, but also a beefed-up counterterrorism mission to help preempt the greatest threat to U.S. interests: terrorists exploiting lawlessness, insecurity and Taliban-controlled territory to use Afghan soil to plot an attack on the United States. Second, appoint an assistant secretary of state for South and Central Asian affairs and an ambassador to Afghanistan (both positions are vacant, as a delegation of U.S. senators lamented on a July 4 visit to Kabul). Empower the former with overseeing the diplomatic components of the strategy and task the latter with meeting regularly with NUG officials to help mediate disputes. Third, oversee an exhaustive effort to probe the possibilities of a Taliban reconciliation process, no matter how remote such a prospect may be. Fourth, help stimulate Afghanistan’s sputtering economy, particularly by increasing investments in an underrated private sector. Afghanistan’s telecom industry, for example, is an unabashed success story and was the country’s largest private employer until higher taxes imposed by Kabul began slowing its growth last year.

The conventional wisdom inside the Beltway is that a withdrawal would be a complete disaster. This may be true. Then again, the balance sheet on America’s continued presence is perilously close to disastrous. After nearly two decades of war, hundreds of billions of dollars spent—including $4 million an hour—and nearly 2,500 American lives lost (as well as nearly thirty-five thousand Afghan civilian lives lost), the Taliban insurgency has never been more ferocious. For Trump, who pledged as a presidential candidate to extricate America from its foreign entanglements, an extended commitment could also become a political liability.

This much is true: Crafting an effective Afghanistan strategy to accompany the troop increase has never been more important—or challenging.