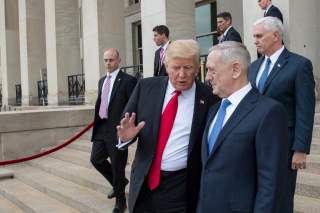 President Donald Trump has had an eventful few weeks in foreign affairs, which began with a sudden missile strike on a Syrian air base and culminated with dropping of the largest nonnuclear bomb on ISIS fighters operating in Afghanistan.

These actions were disappointing to some Trump supporters who were banking on Trump being a different kind of Republican who avoided foreign interventions and pursued a more isolationist, “America First” version of foreign policy. Trump’s recent moves appear to be a startling change.

But many close to Trump insist that this isn’t a shift at all. Trump’s deputy assistant in foreign policy, Dr. Sebastian Gorka, said of the strike on Friday: “This isn’t 2003, this isn’t 1991 and the Gulf War, and the president has not changed one bit. This is not the Bush administration, and it is not neoconservatism.”

Is Trump embracing Bush’s “neoconservative” foreign policy of making the world safe for democracy and large-scale foreign intervention? It’s possible, but more likely he is pursuing a policy that reflects the attitude of the more extensive Republican base of voters, who are neither isolationist, nor interested in democracy extension in far off places.

Most of the GOP base’s attitude toward foreign policy is what political scientist Walter Russell Mead has called “Jacksonian,” after America’s seventh president, Andrew Jackson.

They do not believe that the United States should go out in the world seeking monsters to destroy, but instead they view America’s international relations through the prism of what is specifically in our self-interest.

The hero of the Battle of New Orleans, who Trump has intentionally drawn a connection to, was a rough man, and the world knew he was not to be trifled with. He adhered to the idea of peace through strength, but avoided large-scale war during his presidency. Jackson used calculated threats against powerful nations such as France and overwhelming force against weaker powers like Malaysia to protect American interests abroad. But he was no warmonger.

Jackson believed, as many Jacksonian voters understand today, that for the United States to maintain peace the country must be feared and respected. Jacksonians are generally proponents of using overwhelming force once they have calculated that the nation and its interests are threatened, and they demand that American “honor” be upheld in foreign relations.

Jackson’s personal and foreign-policy motto was simply: “Ask nothing that is not clearly right and to submit to nothing that is wrong.” This is both an olive branch and a clear warning: don’t tread on me.

Most Jacksonians disdained Obama’s foreign policy, and to a certain extent George W. Bush’s. They’ve resented the inability of leaders to call out “radical Islamic terrorism” as America’s enemy. Americans with a Jacksonian point of view see little reason to wage wars—or as the Obama administration sometimes called them, “overseas contingency operations”—with an unnamable enemy.

It is little wonder why so few of these voters supported Obama’s attempt to intervene in Syria, which had ambiguous goals and lacked credibility. The unclear intervention in Libya in 2011, which at best seemed justified by the Jacksonian bugaboo of humanitarian aid and nation-building, did little to persuade them to embrace going into Syria. And after Assad’s wanton crossing of Obama’s “red line,” which was an embarrassment and a show of weakness, Jacksonians were unlikely to be in a fighting mood.

Trump hasn’t shown restraint in calling out America’s enemies in explicit terms. He used the phrase “radical Islamic terrorism” during his first annual address to Congress, while doubling down and labeling the Islamic state a “network of lawless savages.”

This is what these voters were waiting to hear. If America has enemies, call them what they are. Mealy-mouthed descriptions of what this country may spend blood and treasure on brings predictably tepid responses from voters most likely to bear the costs.

After Trump made it clear he means to protect American interests and blow up ISIS, most of his supporters are willing to give him leeway on military action that they would have disapproved of under other leadership.

When Trump attacked Syria, American honor lost after Obama’s disastrous red-line failure seemed restored, and the so-called “mother of all bombs” hit on Afghanistan was a welcome use of strength in a war against a once again recognized foe.

It shouldn’t be assumed that these strikes mean that the United States is succeeding in its international objectives. Dropping bomb after bomb won’t win the war against Islamists, it won’t fix the absurdly complex situation in the Middle East, and it certainly doesn’t address the problem of the rising great-power threat of China edging the United States out of the South China Sea.

However, if the war on radical Islamists is about winning hearts and minds, the most powerful ones to win over are the American people. Moreover, the sudden demonstration that the United States is at least willing to use considerable force when crossed undeniably sends a message to international rivals. Much like how Ronald Reagan gained respect from the Soviet Union after he fired striking air traffic controllers, Trump has sent a message that he is willing to use limited, but overwhelming force when crossed.

Trump’s recent strikes along with a change in rhetoric will go a long way toward restoring American power and prestige amongst Jacksonians. Time will tell if he’s able to leverage this change into long-term success.