Trump's Asia Trip: A Confirmation of the Status Quo 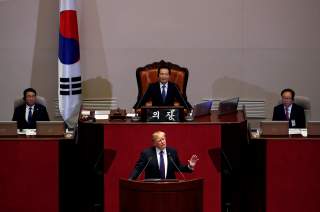 There has been much commentary since American President Donald Trump returned from Asia. Critics saw the trip as failure (the strongest case for that coming from The National Interest’s own Harry Kazianis). The president himself naturally pitched it as a tremendous success. But the reality is almost certainly somewhere in between. Indeed, I would argue that the trip scarcely moved the needle of U.S. relations with East Asia at all. Given China’s continuing rise and consequent pressure on the regional order, Trump’s inability to do much with the trip could be regarded as a failure in a way. But given the reality of Trump’s woeful underqualification for the office he holds, this trip could have been far, far worse. In ratifying the status on North Korea and trade, the two big issues of the Asia tour, the trip actually amounted to little at all.

Trump showed more rhetorical discipline over a sustained period of time than at any point in the last two-and-a-half years, since he joined the presidential race. By choosing not to throw rhetorical barbs and bombs, as he so often does in U.S. politics, he did not disturb the regional status quo as he so easily might have.

Sure, this a preposterous standard in itself—the ‘soft bigotry of low expectations.’ Staying on message is something almost every serious politician learns, but Trump, of course, is not that. It was entirely possible—indeed, it was likely—that he would cut loose on Twitter against North Korean leader Kim Jong-un, drop one of his notorious ad-libs (‘fire and fury’ or South Korea ‘appeasement’), or make some grossly inappropriate cultural error about a region he obviously knows little about. But he did not. He did not say entirely predictable Trumpisms like that the Chinese-Americans love him because he eats Chinese take out near Trump Tower, or that sushi is a Filipino delicacy, or that recent U.S. carrier drills in the Sea of Japan are that ‘armada’ he threatened in the spring. Nine months into a presidency which has included soft words for neo-Nazis and loose threats of nuclear war, this is an achievement. We should be happy this trip was so bland and normal. Given what we know of Trump, it should not have been, but somehow it was.

This is biggest news of the trip. The president was a given a unique, high profile opportunity to address the South Korean public and government. He was invited to speak in front of the National Assembly. No U.S. president has been granted that privilege since 1933. The speech, unsurprisingly, received intense coverage here in the South Korean media, and there was much post-hoc analysis. If there was ever a time for Trump to make the case for war to an ally whose assent to that conflict is all but required, this was it. And Trump passed. Trump ultimately chose to reinforce the status quo—the continuing containment, deterrence, sanctioning and isolation of North Korea. This was moment of high drama, Trump’s best chance to sell the necessity of force, and he blinked. We now know what so many of us have suspected since Trump’s inauguration: he is bluffing on Pyongyang, and all his ‘totally destroy North Korea’ tweets and ad-libs are just bluster. We can say with much greater confidence after the trip that the United States will not in fact strike North Korea soon.

3 - Trump Choose Not to Seriously Challenge China on Trade

Here again Trump, for all his rhetorical heat, cleaved to the status quo. During the campaign, he talked as a tough protectionist, threatening to label China a currency manipulator on trade. He has complained for decades that Asian mercantilism destroys American manufacturing, and he even bizarrely complimented China during the trip for this by praising its ‘taking advantage’ of U.S. trade policy. Yet despite openly telling a Chinese audience that they are benefiting from unfair trade deals—and receiving applause for that from the audience—Trump outlined no major anti-Chinese action either on his trip or in his post-trip address.

This is astonishing. By the president’s own admission, and with Chinese validation in the ensuing applause he received, China is outmaneuvering the United States on an issue central to Trump’s electoral victory in the American Midwest and therefore the presidency. Yet the ‘Chimerica’ status quo continues unchallenged. Trump made no moves, and the Congress simply ignored this surreal exchange to continue with tax reform.

On Trump’s departure to Asia, he said the biggest issues of his trip would be North Korea and trade. On both, he adamantly stuck with the status quo, contradicting those critics who saw major movement during his tour. On North Korea, months of high and often frightening rhetoric from Trump came to naught. He did not even try to convince South Koreans (or the Japanese) of the necessity of the military action he keeps threatening, which strongly suggests he is bluffing. On trade, Trump again flinched, deferring to the status quo on the biggest target of protectionist forces in U.S. politics: China. So on the seminal issues of the trip, the outcome was neither obvious failure nor success. Rather, it was more of the same. That may be good or bad, depending on one’s preferred policy responses to North Korean nuclearization and Chinese industrial policy. But it is not change. Combined with Trump’s unprecedented rhetorical restraint, this lack of policy movement makes the fairest judgment of the trip simply a bland zero. Not much came of it. One might wonder why Trump went at all.