Trump's Base Is Holding 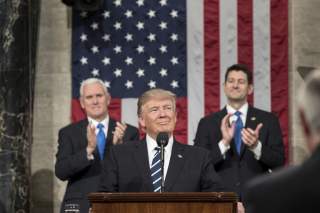 On May 19, 2017, Melania Trump wrote to this commentator—and hundreds of thousands of others—that “a very special birthday is approaching”, President Donald Trump’s 71st, on June 14. The First Lady went on to request that the recipient send the President a message, and a “special donation”, in the birthday card enclosed with her letter.

Slick fundraising strategies like the above seem to be working. Despite the overwhelming pounding President Trump is taking in the mainstream media, of which 80% of the stories are negative, according to a recent Harvard University study, the President and the Republican Party are enjoying unprecedented financial support. At the same time, the Democratic National Committee (DNC) is experiencing its worst fundraising since April of 2009.

Requests such as the First Lady’s have brought in big bucks from the President’s loyal base. In fact, per the Republican National Committee (RNC), the RNC and associated committees had 250,000 “new on-line donors”, which “marks a 398% increase over the number of new donors” to the RNC and affiliates in 2016, an election year.

The April numbers are not a fluke. The RNC has $41.4 million on hand, having raised record amounts in the first quarter of 2017, while the DNC has only $8.8 million in cash. Even that is misleading, as the DNC is nearly $3 million in debt, while the RNC carries no debt.

The DNC’s dismal fundraising and cash balance is in spite of the media’s and elected democrats’ relentless recitation of Russia’s alleged influence on, and collusion with, the Trump 2016 Presidential campaign. One would think that if the media’s constant yammering was having an effect, DNC coffers would be overflowing, while RNC support would be dwindling, as the Republican base grew weary, and wary. The figures show that is not the case.

The DNC’s poor fortunes also are despite their much ballyhooed “Unity Tour”, undertaken by Bernie Sanders and DNC Chair Tom Perez in April. It seems that the more Sanders and Perez traveled and spoke, fewer dollars flowed.

The Base Is Holding:

What explains the fundraising dichotomy? While the “elite media”, elected Democrats and the Deep State, including rogue government employees in the Washington bureaucracies, are doing their best to bring the President down, the outside the beltway, Joe and Jane Six-packs (in Ohio, Pennsylvania, Michigan and Wisconsin) still have faith in their President. That faith can only be enhanced by the well-received foreign tour Mr. Trump just concluded.