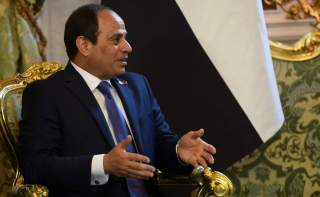 Egypt’s president, Abdel Fattah el-Sisi, declared a three-month state of emergency last week after two suicide attacks on Coptic churches killed forty-four people. In response, President Trump tweeted that he was confident in Sisi’s ability to “handle the situation properly,” less than a week after he also vowed to rejuvenate Egypt’s military and fight terrorism. To be an effective security partner, Trump must do more than just order military equipment. He must hold Sisi accountable for his governance and ensure basic security assistance provisions are met. Failure to do so will result in writing a blank check that backfires on U.S. interests.

Trump’s warm embrace of Sisi is a serious departure from U.S. policy. In 2013, the Obama administration suspended partial aid to Egypt following Sisi’s ousting of Mohamed Morsi, a democratically elected leader from the Muslim Brotherhood. The suspension failed to induce major policy changes by Sisi, but the United States regained leverage in its security assistance by adding several new stipulations, including the discontinuation of cash-flow financing, increased reporting on human-rights performance, and narrowing of military assistance to include counterterrorism, border security, Sinai security and maritime security.

Thus far, the Egyptian government has failed to uphold key provisions of its aid. Trump has an opportunity to make U.S. assistance more effective by taking the following actions:

First, enforce the government’s compliance with military aid monitoring. A GAO report last year concluded that Egypt’s government refused to cooperate with several aid-monitoring mechanisms under Foreign Military Financing (FMF), a State Department program that enables foreign governments to purchase weapons through the United States. In support of the FMF, the Department of Defense and Department of State implement end-use monitoring programs that complete business procedures, like pre-license checks and confirmation of end-user identities. Cooperation with these measures is not a major effort—it’s a basic obligation for a government that receives $1.3 billion annually in U.S. assistance. Trump should see to it that Egypt abides by the FMF requirements.

Second, urge Sisi to meet at least the minimum standard for human rights. Section 620M of the Foreign Assistance Act of 1961, known as the Leahy law, prohibits the United States from assisting the security forces of a foreign country if the Secretary of State has information that such a unit has committed a gross violation of human rights. A loose interpretation of this law is necessary for the United States to have flexibility in its foreign policy, but Egypt’s human-rights record should give the administration pause. The latest human-rights report from the State Department catalogued a series of repressive policies, including the kidnappings of political dissidents, imposition of harsh prison conditions, torture, arbitrary arrests and secret killings.  Most notably, Egypt’s estimated sixty thousand political prisoners have included U.S. citizens like Aya Hijazi, who was just cleared of falsified child abuse and human-trafficking charges after a three-year detention. In apparently setting the conditions for her release, Trump made no public condemnation of Sisi. On the contrary, Trump offered Sisi a ringing endorsement and promised unconditional military aid during his visit to the White House. Though calculated silence and bargaining chips may be required to negotiate the release of U.S. citizens from states like Iran and North Korea, it’s wildly inappropriate for a U.S. ally like Egypt. Moving forward, the administration should expect the protection of U.S. citizens without giving anything in return and push Sisi towards internal reform.

Third, hold Sisi accountable for his government’s performance on counterterrorism.

Despite the country’s purchases of F-16s, Apache helicopters, and M1A1 tanks under the FMF, agile insurgent networks based in the Sinai, including ISIS’s affiliate, have proven their ability to carry out complex attacks at relatively low cost. Last week, Sinai militants killed a policeman at a checkpoint near Saint Catherine’s Monastery, a popular tourist destination. External sources suggest that the number of reported terrorist attacks has peaked in recent years—around 120 per month, which is a statistic not seen since the 1990s. Alleged improvements in Egypt’s counterterrorism performance are also difficult to verify because of a 2015 law that criminalized any reporting that contradicts the government’s account. As a counterterrorism ally that provides heavy military equipment and training to Egypt, the United States deserves higher visibility into where the country is making gains and losses. Trump should measure how well Egypt’s state of emergency actually achieves the country’s security over the next three months.

In the first months of his presidency, Trump has demonstrated a highly transactional approach to foreign policy. He believes that putting America first means getting the most bang for the country’s buck. As the administration continues to propose cuts to the State Department and USAID for foreign-assistance programs deemed ineffective, the administration should also withdraw direct military assistance to countries that do not advance U.S. interests. In the very least, Trump must ensure that Sisi fulfills the basic provisions of U.S. aid. Though the United States is unlikely to induce any major policy changes in Egypt, failure to hold the government accountable will place higher burdens on the United States and associate the country with ineffective governance and rising extremism—two factors that contributed to the 2011 revolution. In the same vein that Trump wants to hold U.S. allies accountable in NATO and the Pacific region, so the message to Egypt should be clear: We don’t want free riders.

Yasmin Faruki is a researcher at the Center for a New American Security​.