Trump's Border and Tariff Stand-Offs Will Cost Him a Trade Win on NAFTA 2.0 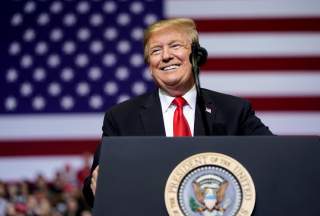 The Trump administration plans a full-court press in the coming months to convince Congress and the American people that the United States-Mexico-Canada Agreement (USMCA) should be ratified. But there remain several political and policy hurdles that could be stumbling blocks

to this replacement for the North American Free Trade Agreement (NAFTA), reportedly the White House’s top goal of 2019.

First, to be ratified during President Donald Trump’s first term, the USMCA must be completed in 2019. Trade agreements are always contentious but passing a comprehensive rewrite of NAFTA during what is sure to be a bruising 2020 presidential campaign is a non-starter. The failed efforts to pass the Trans-Pacific Partnership (TPP) during the 2016 presidential campaign is a recent example of how stiff the political headwinds can be.

Why would Speaker Nancy Pelosi deliver a win to President Trump on a major initiative during the height of the 2020 campaign? Pelosi may be willing to let the USMCA pass on the strength of votes from House Republicans in 2019, especially if she can extract concessions from the administration and Senate Republicans on certain provisions in the agreement or on separate policies like infrastructure. She would not make this same deal in 2020.

Not only are the steel and aluminum tariffs a political problem domestically, but they are also a sticking point for ratification in both Mexico and Canada. For instance, the United States was reportedly trying to convince both countries to accept firm annual quotas on the amount of steel and aluminum they could export to the United States in exchange for lifting the tariffs. That plan ran into opposition from Mexico and Canada, as well as the domestic American business community. After all, most trade analysts understand that quotas are worse than tariffs because, for starters, the government doesn’t receive any tariff revenue. Likewise, with a tariff, domestic consumers can still get the products they need, albeit at a higher cost. Quotas, by contrast, impose price increases and prevent consumers from getting the products they need.

To be sure, the USMCA contains certain improvements over NAFTA, particularly with respect to the new digital trade chapter and customs and trade facilitation. But in many ways, the agreement is inferior to NAFTA, including managed trade provisions related to the automotive industry, like stricter rules-of-origin and wage floors for factory workers.

In the coming weeks, the International Trade Commission will issue its conclusions about USMCA’s economic impact as required under the terms of the Trade Promotion Authority. Preliminary results aren’t positive. The International Monetary Fund (IMF) just released a working paper that found the agreement would lead to “diminished economic integration in North America, reducing trade among the three North American partners by more than $4 billion while offering members a combined welfare gain of $538 million.” The IMF found that even if the United States were to lift the steel and aluminum tariffs on its USMCA partners and Mexico and Canada lifted their retaliatory tariffs the gains would be just $2.5 billion. As Phil Levy of the Chicago Council on Global Affairs noted recently, this is a “rounding error” in terms of gross domestic product.

Perhaps the biggest problem facing the USMCA is the president’s threat to close the southern border in order to address the alleged immigration crisis. Perhaps the president is bluffing and wants to use this threat as leverage to force Congress to pass stricter immigration and border security measures or to force Mexico to crack down on migrants, but it would doom the prospects for USMCA’s ratification. Furthermore, it would poison the well politically in Mexico and the United States. Canada, too, sends plenty of products to and from Mexico through the southern border and would be unnecessarily harmed by it.

Closing the border would be worse than withdrawing from NAFTA. One of NAFTA’s greatest accomplishments was integrating the three North American economies and facilitating the rise of complex supply chains that provide expanded economic opportunities in all three countries while also driving down prices. Closing the border would grind trade with Mexico to a halt and Mexico is America’s third-largest trading partner behind Canada and China. Nearly $1.7 billion worth of legally traded goods passes through the southern border every day. This ill-advised idea would necessarily hurt a lot of Americans. Jobs that are dependent on a relatively seamless flow of products between the United States and Mexico may vanish, while consumers could see price increases or products disappear entirely. Those effects would be in addition to the harder-to-calculate but still real diplomatic damage the move would cause.

If the administration is serious about ratifying the USMCA this year, it needs to quickly abandon the steel and aluminum tariffs on Mexico and Canada and back off its threat to close the southern border.