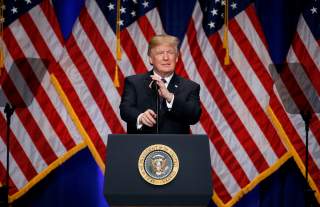 The Trump administration’s National Security Strategy starts by declaring that it will use “principled realism” to put American interests, values and prosperity first. It says that engagement with the world needn’t mean abandoning national self-interest, that great power competition should be the main preoccupation of U.S. security, and that allies should do more to provide for their own defense. Such realist rhetoric offends most foreign-policy pundits in Washington, who tend to deny that U.S. interests and global goods are distinguishable.

The critics have it backwards. The strategy isn’t too realist or too narrowly focused on American interests. Its problem lies in its shortcomings in properly applying those principles. Rather than chart an overdue departure from the overwrought approach to security that this administration inherited, the strategy endorses it with vaguely realist rhetoric. It proposes too little meaningful change aside from a few protectionist measures, which would harm our economic prosperity even though the strategy claims that as its lodestar.

This lack of prioritization mirrors U.S. security policy. Formal strategy statements like this one are supposed to guide security policy, but mostly they promote it. As U.S. foreign policy has grown more ambitious, especially since the Cold War ended, strategy statements have become less focused. They avoid the fundamental purpose of strategy, which is to prioritize, guiding the allocation of limited resources to most efficiently protect our national interests. Instead they indulge in flights of rhetorical fancy about the virtues of U.S. power, imagining that peace, liberalism and stability everywhere depend on our self-appointed role as global sheriff.

The Obama administration’s last National Security Strategy, for instance, lists eight “top-strategic risks,” including “disease, economic slowdown, and climate change.” It mentions “hard choices” and warns against “overreach” but declares that “there are no global problems that cannot be solved without the United States.”

Defining security so capaciously exaggerates danger, making our strong geopolitical position seem precarious when it is the envy of every other country. The document’s lack of prioritization demands excessive Pentagon spending and calls for missions that needlessly overburden the military. Its preoccupation with peripheral concerns comes at the expense of core U.S. interests: defending Americans, enhancing our prosperity, and protecting our way of life.

With its stated focus on those goals and its relatively direct language, the Trump strategy initially seems poised to avoid these pitfalls. But upon close inspection, mostly it doesn’t, and it adds a few of its own. Let’s take its good ideas, its bad execution and its ugly new problems in turn.

In addition to its promising start, the document deserves praise for focusing on U.S. values and prosperity. These goods are too easily sacrificed when dangers are invoked. The strategy correctly calls the $20 trillion and counting in national debt “a grave threat to America’s long-term prosperity and, by extension, our national security.” That’s a useful reminder as spending hikes threaten to send the debt even higher.

This strategy is guided by principled realism. It is realist because it acknowledges the central role of power in international politics, affirms that sovereign states are the best hope for a peaceful world, and clearly defines America’s national interests. It is principled because it is grounded in the knowledge that advancing American principles spreads peace and prosperity around the globe. We are guided by our values and disciplined by our interests.

That’s a pithy expression of how values and interest interact, which avoids the standard hooey about how they perfectly align. And the point about states needs making; contrary to much speculation, states remain the key source of problems and solutions in international politics. The document includes a few other insights with a realist bent—democratization isn’t always pacifying, economic liberalization doesn’t cause political liberalization, and states naturally compete for power.

And though it oddly asserts that great-power competition has “returned” (realists say it never left), at least the strategy acknowledges its importance, along with nuclear deterrence. Past strategy documents tend to obscure the fact that U.S. security policy is chiefly concerned with big-state rivals, which we threaten with nuclear devastation to protect allies.

The main trouble with this strategy is that its realism is mostly rhetorical. Those points mainly serve to paint an ominous picture of international politics. The policy implications are left vague or too often contradict. The document proposes too little meaningful change in U.S. strategy, let alone a total rethink of the status quo.

A realist approach would also entail sharper choices among policies, with more attention paid to what can be curtailed. Realism focuses on tradeoffs—the sacrifices one end requires in pursuing others. Moreover, realism suggests a more optimistic take on U.S. security. It takes the sources of U.S. security, like enemy weakness and nuclear deterrence, far more seriously.

Instead, the new strategy, in fifty-five pages, runs through the gamut of current U.S. security policies, essentially endorsing everything, while sometimes applying new labels or calling for doing it harder or better. We’re told of the importance of strengthening U.S. alliances in Europe, the Middle East, and Asia to maintain a “favorable balance of power,” and the importance of U.S. activism in Latin America and Africa.

A realist national-security strategy wouldn’t just ask rich allies to spend more on their militaries. It would compel them to do more for their own defense—and to provide security for their neighborhoods, rather than relying on U.S. taxpayers and service members.

Strangely little is said about U.S. wars, all of which the administration has expanded or intensified. Short statements about staying engaged in Iraq, Syria, and Afghanistan and general talk about counterterrorism seem to endorse all ongoing efforts, though Somalia, Yemen or Libya, three countries where U.S. drones and special attack terrorists, aren’t even mentioned. An approach focused on U.S. interests should lament how U.S. forces do much of the heavy lifting in these wars and discuss ways to better enable local forces and get major U.S. allies to contribute more. It should distinguish between conflicts that involve terrorists focused on killing Americans and those which are basically civil wars involving Islamists—while tragedies, the latter pose little threat to Americans absent U.S. intervention.

As with past National Security Strategies, this strategy’s expansive take on national interests too often exaggerates threats. It argues that today’s threats are “just as serious, but more diverse” than threats during the Cold War. That makes light of the Cold War, especially the early years, which is when communism subversion was a growing problem, the Soviet military outgunned U.S. allies, and nuclear war seemed hard to avoid.

The strategy’s concern with economics does not extend beyond U.S. shores; nothing is said of the economic flaws likely to slow China and particularly Russia’s military investments. Russia is indeed a menace to its weaker neighbors and its dissidents and energetic in hacking and misinformation campaigns. But with an economy a third smaller than Italy’s, that is hooked on energy prices and graft, and a military that remains a ghost of the Soviet heyday, despite recent improvements, it’s barely a great power, let alone a direct threat to western Europe.

The strategy also has little regard for current U.S. military capability. It asserts that lately “the Joint Force did not keep pace with emerging threats or technologies.” There are plenty of troubling inefficiencies in Pentagon spending, but the $1.7 trillion plus that went to military acquisition last decade bought was plenty to ensure that our consummately professional forces aren’t outgunned by anyone.

The report worries about Chinese aggression and missile capability, but it does not explore U.S. countermeasures, the massive superiority of the U.S. Navy and Air Force, or the sterling track record of U.S. extended deterrence. It suggests without explanation that U.S. nuclear deterrence is somehow prone to failure unless spending on nuclear weapons increases.

The strategy is especially frightened by lesser powers. It promises to contain Iran’s nuclear program but ignores the agreement in place now doing so. It calls Iran the world’s greatest terrorism sponsor, but it does not mention its reformist elements or how shrewd U.S. diplomacy could empower them. It ignores all that our Gulf “allies” do to promote extremist views conducive to terrorism.

The treatment of North Korea departs most sharply from realism. The strategy implies that North Korea’s regime type makes it unreliable and that deterrence can’t work. Realism is more sanguine about our nuclear weapons’ ability to deter aggression, especially by weak states already overmatched in conventional arms, doubtful about claims that autocracies are especially hard to deter, and pessimistic about preventive war (attacks meant to diminish a rival’s capabilities without any imminent threat of its attack).

The strategy also repeats traditional errors in refusing to acknowledge how the goals it values compete. It doesn’t say, for example, how the many national-security missions it supports, including the wars, erode the military readiness it wants. It fairly criticizes the belief that revolutionary technology allows less manpower in wars, but it doesn’t ask if the idea that drone strikes and special-operations raids will defeat insurgencies and terrorists might be similarly misplaced. The strategy is similarly myopic about the Pentagon spending increase it wants. It doesn’t mention that the Pentagon’s budget increases the debt or that it goes largely to unproductive ends like encouraging wealthy allies to free-ride on U.S. defenses.