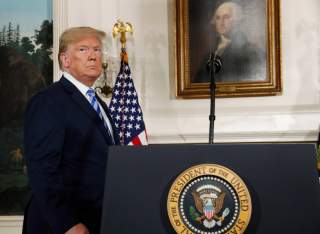 In announcing his intent to kill the Joint Comprehensive Plan of Action (JCPOA) President Trump argued that Iran's "bloody ambitions have grown only more brazen" under the Iran deal. Trump cited a 40% increase in Iranian military spending as evidence of Iran’s supposedly worsening behavior and later claimed Iran is “trying to take over the Middle East by whatever means necessary. Now, that will not happen!” In his speech detailing a “new” Iran strategy, Secretary of State Mike Pompeo doubled down on these assertions, stating “Iran advanced its march across the Middle East during the JCPOA.”

However, claims that the Iran nuclear deal resulted in a dramatic escalation of Iran’s confrontational behavior, or a drive to conquer the Middle East, have never been matched by the facts. Trump and Pompeo are not the inventors of this false narrative. But by putting it at the center of their argument for killing the Iran nuclear deal, they are providing a deceptive and dangerous cover for efforts that will not just unravel hard-won constraints on Iran’s nuclear program, but likely make Iran’s regional behavior far more challenging.

Iran’s economy did rebound under the nuclear accord, leading to increased spending - including on Iran’s military. However, as the Director of the Defense Intelligence Agency testified last year, the preponderance of Iran’s relief from sanctions under the deal went to “economic development and infrastructure.” That directly undercuts Pompeo’s assertion that Iran’s leaders “refused” to try to boost the economic aspirations of the Iranian people. According to data from SIPRI, as a share of overall government spending, Iranian military expenditures also remained almost the same: 15.8% in 2017, compared to 15.4% in 2015. In 2012, amid the height of sanctions pressure against Iran, the rate was 19.3%. So, while Iran increased military spending, it appears to be consistent with government spending increases across the board.

Moreover, there are two other factors that should be considered when thinking about Iran’s escalated military spending. First any state that verifiably restricts its ability to get nuclear weapons is likely to invest in its conventional capabilities, as the Obama administration indicated would be the case when defending the JCPOA. It’s hard to argue that the U.S. has been worse off with Iran seeking conventional rather than nuclear capabilities. Second, Iran’s spending has not occurred in a vacuum, but as the U.S. sells Saudi Arabia billions in weaponry amid a regional proxy war. American assistance to Saudi Arabia means that even with Iran’s increased defense spending, Iran remains outspent militarily by Saudi Arabia alone at a 5:1 rate.

Iran’s sporadic ballistic missile testing - accentuated by threats against Israel - has been one of the more inflammatory steps Iran took amid the deal’s implementation. Yet, Iran had largely paused its missile testing amid the nuclear negotiations, and then resumed its testing at a frequency largely consistent with past practices once the deal began to go into effect. Moreover, Iran appears to have prioritized shorter-range systems aimed at regional deterrence and restrained its fielding of longer-range missile systems better suited for nuclear weapons delivery. In fact, by dramatically reducing the risk of Iran obtaining fissile material and potentially slowing Iran’s missile development, the JCPOA significantly reduced the threat of Iran’s missile program. Terminating the JCPOA will only make the program more dangerous, not less.

JCPOA critics have also focused on Iran’s backing of Assad in Syria’s civil war, and the Assad coalition’s improving position in recent years, as evidence of Iran’s “hegemonic ambitions” since the nuclear deal went into effect. However, Iran’s backing of Assad in the civil war preceded the start of nuclear negotiations. Given Iran’s long-standing interest in avoiding the overthrow of one of its only geopolitical allies, it is difficult to argue that Iran’s support for Assad would have been any different if nuclear negotiations never began or the JCPOA was never struck. Moreover, opponents to the Iran deal conveniently ignore perhaps the biggest factor that shifted the tide of war- Russia’s entry into the conflict, which had little to do with Iran or the nuclear accord.

Instead, deal critics might have a better case to make in Yemen, as Houthi rebels seized the capital Sanaa in late 2014 amid ongoing nuclear negotiations. However, that seizure was over Iranian objections, and while Iran appears to have increased its once limited backing of the rebels as the conflict has dragged on, that support is still comparatively low cost. Meanwhile, Saudi Arabia has escalated its bloody and brazen bombing campaign of Yemen with the full backing of the Trump administration.

Further complicating the narrative of an increasingly dangerous Iran is that Iran and its proxies were vital to the rollback of U.S. arch-enemy ISIS. Moreover, this cooperation with Iran was pocketed by the U.S. and is now conveniently ignored by the Trump administration. Additionally, there were several signs that Iran took steps to reduce the risk of escalation in recent months. Iran had abstained from testing missiles since last summer, paused their harassment of U.S. naval ships in the Persian Gulf and avoided striking back in response to Israeli strikes on Iranian positions in Syria until Trump shredded the deal. With Iranian hardliners vindicated by Trump’s decision, it is likely that any recent caution will soon evaporate.

The nuclear deal contained Iran’s nuclear program and – contrary to Trump’s claims – did not significantly alter Iran’s regional ambitions or activities. It is critically important for policymakers concerned that Trump has re-opened the door to an Iranian nuclear weapon and war not to back down in the face of Trump’s hyped threats or, worse, to accede to the administration’s efforts to punish Europe for seeking to uphold the nuclear accord. Policymakers have already seen the consequences of accepting hyped threats as fact in the lead-up to the 2003 invasion of Iraq. With Iran, there is little excuse for policymakers who fail to rein Trump in and doom themselves to repeating history.

Image: U.S. President Donald Trump arrives to announce his intention to withdraw from the JCPOA Iran nuclear agreement during a statement in the Diplomatic Room at the White House in Washington, U.S., May 8, 2018. REUTERS/Jonathan Ernst