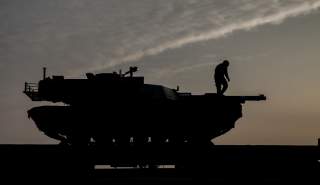 President Trump’s budget team said Monday that he will seek to increase the defense budget by $54 billion next fiscal year in 2018.

This sounds like a lot, but it will not be sufficient to undertake any kind of military buildup. This is more like digging out. Here’s why:

1. Trump’s federal budget is an effort to appease both fiscal and defense hawks in seeking to grow defense, but only at the expense of nondefense discretionary spending. The military increase will be paid for in dollar-for-dollar decreases elsewhere, cutting programs such as the National Endowment for the Arts and Head Start.

This type of proposal cannot pass the House of Representatives, much less the Senate. The conservative House Republican Study Committee released budgets for 2015 and 2016 that cut nondefense discretionary funding far more deeply than this current plan does (though the RSC plans also cut mandatory spending, which this plan doesn’t). Both budgets failed when voted upon, with less than half of the GOP voting in favor in each case.

2. By putting a plan out there that is dead on arrival on Capitol Hill, the White House injects uncertainty into the budget process. Military leaders have said for years that uncertainty causes just as much damage to defense as spending cuts. This is an agency that buys over $350 billion per year in goods and services.

Uncertainty means training is scaled back; maintenance of ships, aircraft and buildings is deferred; contracts cannot go into effect; and bids are stalled out or not offered—all while program managers wait to get clarity on the amount of money they’ll receive when the fiscal year starts.

3. For these reasons, the budget proposal dramatically increases the odds that fiscal year 2018 will start on a continuing resolution, like so many dysfunctional years before it. Frozen spending levels cause unique damage to the Pentagon, because no new programs can begin and no existing ones can expand.

While a freeze on spending causes financial hardships for the Pentagon, this budget will lead to an inability for Congress to operate under regular order. Appropriations bills will be unable to move because the budget fight at the beginning, middle, and end of the year will be about how to resolve the Budget Control Act once and for all. Until there is another mini-deal a la Ryan-Murray or grand bargain, all fiscal policy questions will swirl around Washington leading to more of the same: gridlock.

4. A $54 billion increase above legal spending caps set by the Budget Control Act is a much more modest growth of just $18 billion above President Obama’s plans for the same year. 10 percent is more like 3 percent growth, based on a budget the Joint Chiefs developed that was informed by rapidly rising threats and an effort to begin stemming the tide of declining military supremacy.

5. A 3 percent defense budget increase above expected levels is not enough to move the military needle, even if Trump’s team rewrote the entire Obama budget for next year—which is highly unlikely, given the condensed calendar and Joint Chiefs’ endorsement.

Current readiness problems will cost much more than $18 billion to eradicate. The Army alone canceled seven rotations to the National Training Center after sequestration because of insufficient funds. That service’s modernization budget is only half of what it was in 2009. Half of Navy aircraft currently cannot fly because they are beyond their designed service lives. Meanwhile, the Air Force is short 1,500 pilots and over three thousand maintainers.

6. What remains unclear is the total defense budget request by Trump’s team, which will include funding for overseas contingency operations (OCO). With Mick Mulvaney running the White House budget office, it is likely that OCO will be scaled back, and some migration will begin of nonemergency priorities in this account shifting over to the base budget.

An emergency spending request by Trump of, say, $50 billion for next year, when this year’s authorized emergency spending is $68 billion, is a cut, plain and simple. This means total defense spending may simply break even from 2017 when all is said and done.

7. Increasing security spending while cutting other federal programs simply incites Democrats and girds the two parties to go to battle. Beltway politics are already ugly, as evidenced by increasingly party-line-only votes on bills and nominations big and small. This budget will only throw gasoline on the already raging fire.

8. Leaving over two-thirds of the federal budget largely untouched to pay for defense and other security-related increases is just more of the same from a president who promised bold action. Kicking the budget can further down the road is what Congress does best. Now President Trump can be officially labeled a “politician” for dodging the hard choices in fiscal policy that are required today. They will only worsen as time goes on.

Placed in context, President Trump’s defense increase is looking smaller by the hour. Most of the money will go to plugging readiness gaps, but that will lead to an imbalanced force. If today’s modernization is tomorrow’s readiness, Trump will need to spend much more than the $54 billion in this plan to both restore readiness and recapitalize the services fleets and inventories. And he’ll need to find a way to pay for it that has bipartisan support. Otherwise, $54 billion will be zero for defense.