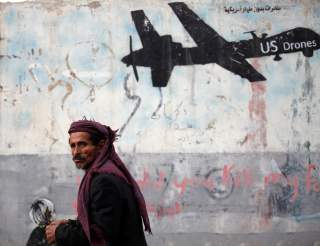 Throughout U.S. history, presidents have been known to blame their predecessors if things in the country aren’t going particularly well. To explain away America’s awful economic outlook in 2009 and the slow economic recovery of 2010 and 2011, Barack Obama pointed to George W. Bush as the main culprit for the fiscal disaster. He told Americans repeatedly in his first year that he “inherited” the worst economic recession since the Great Depression—true enough, but a statement that still seemed to many people in America’s middle and working classes as a passing of the buck.

Donald Trump picked up where Obama left off. The 45th president has faulted the 44th for practically every trouble befalling America today. If Syria is a violent mess, it’s due to Obama’s weak and bumbling leadership. If America’s infrastructure is so discredit today, it’s because his predecessor failed to spend taxpayer money on the right problems. And so on.

Trump is using this same approach to justify his counterterrorism policies. The Obama White House, Trump tells us, was insufficiently aggressive against Al Qaeda and the Islamic State, unwilling to bomb who needed to be bombed and too concerned about collateral damage to prosecute the war effectively. In Trump’s orbit, the war tempo was too slow during the Obama years. The bureaucratic rules governing the use of drone strikes were too extensive, tying the hands of the warfighters behind their back.

There’s an argument to be made about some tactics, but it’s the strategy from the last sixteen-plus years that has failed so spectacularly.

Indeed, there was no doubt whatsoever that Trump was going to change how the United States prosecuted the ongoing campaign against terrorists. Almost immediately upon entering office, the new administration provided commanders in the field with more authority to pick targets and more freedom to bomb those targets without first asking for Washington’s position. The secretary of defense, not the president, would now determine what resources and troop numbers were required to win on the battlefield.

While White House and Pentagon officials are loath to admit it, this more streamlined chain of command has also led to an increased rate of civilian casualties. It’s not a coincidence that civilian deaths skyrocketed in Iraq and Syria after Trump was inaugurated. In a way, it was predicted—when you limit the number of hoops that commanders have to jump through before authorizing airstrikes, it becomes that much easier to accelerate the pace of military operations. As Micah Zenko and Jennifer Williams wrote in Foreign Policy last month, the amount of bombs that have been dropped by U.S. aircraft in Afghanistan, Iraq, and Syria and the number of operations the U.S. military has conducted in Yemen, Somalia, and Pakistan are ions higher than Obama-period levels. “Under Trump,” Zenko and Williams reported, “the United States has dropped about 20,650 bombs through July 31, or 80 percent the number dropped under Obama for the entirety of 2016.” Granted, we kill a lot of bad guys and level much of their terrorist infrastructure, but these tactical victories aren’t without cost. In some cases, civilians who lose relatives and friends in errant drone attacks are motivated to take revenge, joining the very terrorist groups the United States seeks to keep off balance. The fundamental issue of whether we are creating more terrorists than we eliminate from the battlefield has yet to be fully addressed by U.S. policymakers.

Americans should anticipate a continuation of this trend, perhaps in more countries. If reports are true that President Trump will soon hand even more power to the CIA to run its targeted killing program as it sees fit, more civilians will die and possibility that more recruits will be created in the process is a very real possibility that the administration needs to prepare for.

With more power, however, comes more responsibility. Separate and apart from the utility of drone warfare is the subpar accountability and oversight of the entire program. The American public knows almost nothing about the in’s and out’s of the targeted killing program; indeed, if it weren’t for excellent investigative reporting from the likes of the Bureau of Investigative Journalism, the New America Foundation, and the New York Times, Americans would be left completely in the dark. Fortunately, think-tanks and diligent reporters have uncovered just how extensive Washington’s dependency on drones is—to date, the United States has launched drone strikes against senior terrorist commanders and low-level militants in seven countries spanning two continents. Whether or not one believes that drones are valuable and precise tools of warfare or morally and legally unconscionable killer robots, the least we can all agree is the importance of accountability to the public.

If the administration is intent on loosening Obama-era procedures and eliminating review from the National Security Council with respect to who can and cannot be targeted, it ought to divulge some basic information to the American taxpayer about a program that they fund in the first place.

Questions such as how many civilians have been killed; which terrorist groups are considered Al Qaeda or Islamic State affiliates and are therefore part of the target list; how many of the militants killed are senior leadership figures, mid-level facilitators, spokesmen, financiers, or low-level grunts; how much does the program cost; and how much compensation money has been awarded to families who lost a relative by being in the wrong place at the wrong time? Each of these questions is essential for the public to evaluate the effectiveness, efficiency, and cost of a targeted killing program that has been and remains a central tool in U.S. counterterrorism policy. And none of the answers that the administration provides would force it to release classified information.

One may ask why disclosing this type of information is important. Many in the intelligence community will be opposed to releasing any statistics at all, perhaps concerned that even the smallest amount of information in the public domain would be detrimental to the human sources the CIA depends on during many of its operations.

But as citizens in a constitutional republic, the American people are entitled to know what their political leaders are doing in their name. And this information is essential for the taxpayer to hold government official accountable. It’s as straightforward as that.

Fortunately, we don’t need to rely exclusively on the president for a minimum amount of transparency. As a separate and coequal branch of federal government, Congress is empowered with the constitutional responsibility to oversee the executive branch and the tools to compel it. The big doubt in the minds of many is whether the legislative branch can be jolted out of its decades-long systemic coma on matters of national security.

Daniel DePetris is a fellow at Defense Priorities, a nonpartisan foreign policy organization focused on promoting security, stability and peace.