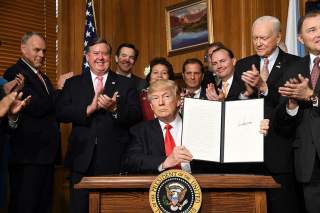 The president had a rough first hundred days. His party controlled both houses of Congress, but he couldn’t pass major legislation. Immigration and health care proved to be tripwires. Many government posts went unfilled, and key appointees who did take office were controversial. The president’s family took on a policymaking role that struck critics as equal parts preposterous and outrageous—as if the White House had been turned into a family business.

All of that describes Donald Trump’s first hundred days as president—but it also describes the first hundred days of President Bill Clinton. By this point in his administration, Clinton had seen his stimulus bill shot down in the Senate by a Republican filibuster. He’d had two nominees for attorney general, Zoe Baird and Kimba Wood, withdraw after it was discovered they had each employed illegal immigrants as nannies. Clinton, unlike Trump, had launched no missiles at Syria by this point, but his third and finally successful attorney-general nominee, Janet Reno, oversaw an FBI assault on the Branch Davidian compound in Waco, Texas, that resulted in the deaths of more than seventy people. Terrorism and war in the Middle East were already challenges for the new president in 1993 in any event, with the United States enforcing no-fly zones in Iraq and Islamist radicals bombing the World Trade Center in February. Meanwhile, Clinton appointed his wife to lead a task force to redesign America’s health-care system.

Donald Trump may be the most unconventional leader in the country’s history, but he is hardly the first president whose first hundred days have been characterized by more trouble than triumph. The comparisons with Clinton are particularly noteworthy, however. Clinton, like Trump, campaigned as a populist of sorts, and by doing so successfully beat a Bush. And though Democrats today might like to forget, Clinton campaigned as a tough-on-crime candidate, one who was not above playing the race card. But the most important parallel between Clinton and Trump is that they both took office at the end of one era and the beginning of another. Clinton was the first truly post–Cold War president. And Trump is the first president of this nameless era that is post–“post–Cold War.”

Clinton, like Trump, tried to bring a new way of doing things to Washington. Clinton’s first moves were radical, and while few of his most daring initiatives came before Congress or the public in his first hundred days, they were already taking shape behind the scenes. He wanted to end the ban on homosexuals serving in the armed forces. His wife’s health-care task force would call for universal coverage. He moved aggressively to get gun control and abortion rights onto Congress’s agenda, ultimately leading to the Freedom of Access to Clinic Entrances (FACE) law and the 1994 assault-weapons ban. He pushed hard to the left on social issues while pulling his party away from its old, pro-labor economic orthodoxies: one result of that, at the end of his first year in office, was NAFTA. In foreign policy, Clinton stumbled at the outset—his first secretary of defense, Les Aspin, lasted little more than a year before resigning (in part over the loss of American lives in the Battle of Mogadishu, nine months into Clinton’s first term).

Although his achievements were meager by the end of his first hundred days, Clinton had signaled grand ambitions for transforming both his party and Washington. Yet the biggest change was one he didn’t anticipate: the Democrats’ loss of the House of Representatives for the first time in forty years in November 1994. Clinton appointed only progressives to the Supreme Court, but after the Republican takeover of Congress, his administration became more notable for its neoliberalism—as it’s now called—than for its social agenda. Globalization and the “new economy” were the watchwords of the Clinton years.

Trump at one hundred days still often sounds like the populist he was on the campaign trail. Within the White House there are strategists and advisers committed to economic nationalism and restricting immigration, as well as to a conservative social agenda. Trump campaigned, in more ways than one, as the anti-Clinton, the man who would stand against the tide of globalization and beat back the waves. But in one respect, as these first hundred days have also made clear, the Trump administration is not so much an inverted image of the Clinton administration as its twin: Trump, like Clinton, is dependent on financial brains borrowed from Wall Street, and from Goldman Sachs in particular. After the Democrats’ wipeout in the 1994 midterms, Clinton became known for ideological “triangulation,” although the seeds of that tactic had been there all along. Many Trump supporters already fear that their candidate has begun warming to the ways of Washington after only three months. How will he respond if, as seems probable, Republicans suffer heavy losses in Congress a year from November? Trump has always had some centrist DNA, as well as a penchant for changing positions rapidly and guiltlessly. Come 2019, will Steve Bannon’s shoes be filled by a David Gergen?

Trump was more right than even he may have known during last year’s campaign. The Clinton years were disastrous, undercutting the American middle class in the long run and squandering the strategic advantages the country acquired at the end of the Cold War. George W. Bush perpetuated and exacerbated his predecessor’s folly, and Barack Obama proved too timid to bring about the “change” he had promised. That’s why Trump is president now, and why Bernie Sanders is the most popular politician in America.

Winning an election, or a popularity contest in a poll, is very different from governing, however. The challenge for anyone who comes to Washington to change the way this town works is to persevere through all that setbacks that necessarily come with inexperience—and to absorb the old elite’s policy expertise without coming to think like them in the process. Trump himself is unlikely to be tamed by anyone, but the same can’t be said for his administration. It can move to the center and still be true to its mission—the populist mission that Trump’s voters entrusted to him and his team. But that would require devising a centrist populism, or even incorporating elements of left-wing populism. The more likely path for this administration to follow is the one that Clinton trod—the one that took him from progressivism and populism to globalism, and which may take the Trump administration from right-wing populism to the same destination.

After one hundred days, the Trump White House is still an experiment in progress, as many a White House is at this point. No meaningful deadline has passed: the one that matters is not the hundred-day mark, it’s the midterm election. Between now and then, the administration should give careful thought to whether it wants to repeal the Clinton program—or repeat it.