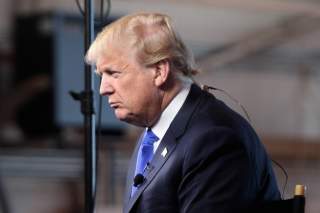 “Dangerously incoherent.” “Bizarre rants.” “Outright lies.” “Temperamentally unfit.” “Not someone who should ever have the nuclear codes.” Such were the phrases employed by presumptive Democratic nominee Hillary Clinton in describing her Republican opponent Donald Trump’s foreign-policy vision for the United States, in a speech delivered earlier this month. Throughout the speech, Secretary Clinton echoed nearly every neoconservative criticism of Trump that at times it almost seemed as if someone in her bloated staff had merely copied and pasted an article right out of the Weekly Standard onto the teleprompter. Be that as it may, the speech was predictably well received from a national press bitterly hostile to Mr. Trump’s unorthodox candidacy. After his own high-profile foreign-policy address at the Center For the National Interest in April, the New York Times editorial board—a paragon of foreign-policy wisdom—offered a scathing review, accusing Trump of peddling “outright falsehoods, often based on wrong assumptions.” Yet, in a world after the Paris, San Bernardino and Orlando attacks, are Trump’s assumptions all that wrong? More broadly, is his foreign-policy vision as “dangerously incoherent” as Secretary Clinton would lead us to believe?

Viewed through a lens where successful foreign policy is predicated on preserving and extending national power, Trump’s proposals are serious, sensible and undergirded by the belief that the safety, security and economic well-being of American citizens should take precedence over all other considerations, even when this belief conflicts with altruistic impulses like accepting refugees from the war zones of the Middle East or using military force to ease the sufferings of civilians in those same war zones. Continuing to spend exorbitant amounts through the European Reassurance Initiative to defend a continent that is more than capable of taking on a greater share of the security burden to deter whatever foe to the east it faces while signing trade accords that pay lip service to the ingenuity of the American worker only advances the financial interests of global elites. The ones who suffer are the increasingly shrinking American middle class.

Take, for example, Mr. Trump’s proposed ban on noncitizen Muslims from war-ravaged countries in the Middle East from entering the United States that was first announced in December after the Paris and San Bernardino massacres. Trump later reiterated this position in a speech the day after the attack in Orlando. In spite of the hyperbolic comparisons to George Wallace, Mr. Trump has never once stipulated that his proposal would be one meant for “now, tomorrow, and forever.” Moreover, from a national security perspective his proposal is pragmatically sound. At least four of the Paris attackers fought with the ISIS in Syria before returning to Europe to carry out their attacks. And a phony Syrian passport that had made its way through Turkey, Greece, Croatia, Hungary and France was discovered near the body of one of the attackers who had blown himself up outside of the Stade de France. With that in mind, and with CIA Director John Brennan testifying last week that ISIS was looking at refugee flows as a possible means for terrorist infiltration, how dangerous or bizarre is it for the United States to temporarily halt allowing in anyone from Syria and other regions of conflict until effective screening measures adjusted to the realities of this new threat are implemented? That the San Bernardino and Orlando attacks involved U.S. citizens Syed Farook and Omar Mateen is irrelevant. There are obvious shortcomings in the Obama administration’s approach in combating the domestic terrorism threat. There is ample reason to worry that Obama’s refugee policy only increases that threat. In a worst-case scenario, someone with all the right identification papers and with no recorded history of radicalization could clear the current screening process with the intent to do Americans harm. Furthermore, Mr. Trump should not have to be subjected to lectures from President Obama or Secretary Clinton about how dangerous his proposals or allegedly inflammatory rhetoric are when it was their policies in the Arab world that were conducive to both fostering the migrant crisis and exacerbating the threat that transnational terrorism poses in the first place.

Another area where Trump has generated considerable criticism is his resistance to getting into the policy weeds in terms of how he intends to successfully dismantle ISIS—aside from “bombing the shit” out of the ISIS oil economy. Some of the answers may lie in what Trump hasn’t proposed. Unlike Obama and Clinton, Trump hasn’t called for Bashar al-Assad’s to be ousted in Syria. He has also been a perennial skeptic of arming Assad’s Islamist opposition—“the moderates” in the Obama–Clinton–Kerry parlance. Taken together, Trump seems to be operating on the assumption that Assad’s loss is ISIS’s gain. This would signal a welcome and long overdue reversal from the Obama-Clinton strategy in Syria, a strategy that according to the aforementioned testimony of Mr. Brennan’s is failing miserably. In addition, Trump’s calculated refusal to offer more specificity isn’t necessarily a vice. Unpredictability can be a virtue in foreign policy, as recent history confirms. At the height of the Cold War, Eisenhower, who feigned general aloofness, famously equated atomic weapons with bullets and threatened a deliberately ambiguous policy of “massive retaliation” against the communists in the Soviet Union and the People’s Republic of China if they attempted aggressive or expansionary military moves in their respective neighborhoods. This vagueness was all in the complex but successful effort to establish credible deterrence and prevent general war among the major powers. Likewise, Nixon was elected to the presidency in 1968 on the vague promise of a “secret plan” to end American military involvement in Vietnam and with hardly a public inclination towards a U.S.–China rapprochement. He would go on to succeed on both fronts, extricating the United States from the Vietnam cauldron, and paving the way for the eventual normalization of relations with China.

Trump’s rejection of Washington’s conventional wisdoms makes him controversial, not bizarre or irrational. Ronald Reagan was also one who wasn’t reticent about stoking controversy, evident in his steadfast rejection of the bipartisan consensus on U.S.-Soviet détente and his willingness to posit new ways of thinking about American foreign-policy aims. And as Secretary Clinton well remembers, candidate Obama—though his presidency tells a different story—didn’t shy away from challenging entrenched Democratic establishment views on a whole host of foreign-policy issues in 2008. In the same vein, Mr. Trump’s aversion to exporting Western democratic values through force of arms and nation-building, his skepticism of international alliances that entangle the United States in problems divorced from its core interests, his willingness to explore the possibilities of a new cooperative relationship—indeed détente—between the United States and Russia if it serves the interests of both powers all represent his commitment to American interests. Additionally, Mr. Trump’s proposed wall along the southern border and the like might frighten Washington elites, not because his views are incoherent but instead because they represent a direct challenge to their custodianship of a failing foreign-policy status quo.

If Donald Trump does indeed have an “America first” worldview, then Hillary Clinton’s foreign-policy vision is one in which America and its national interests are considered last. The debate that ensued late last year in the wake of Russia’s military intervention in Syria concerning the establishment of a U.S.-designated no-fly zone is a case in point and indicative of the kind of temperament that Clinton would bring to the Oval Office. On the very day after Russia began its bombing campaign in support of the Assad regime, Clinton called for the immediate imposition of a no-fly zone with the stated purpose of protecting Syrian civilians from further bloodshed and “to try to provide some way to take stock of what’s happening.” This was obviously problematic for several reasons. First, if a no-fly zone had yet to be implemented by the Obama administration in the four and a half years before Moscow’s intervention, why would Clinton advocate for one now that Russian warplanes were active over Syria’s skies? Secondly, Clinton had used the same justification of population protection four years prior in Libya—right before what was billed as a limited humanitarian intervention magically morphed into an expansive bombing campaign to decapitate the regime of Muammar el-Qaddafi. Third, a successful implementation of a no-fly zone would have required tens of thousands of American troops on the ground in Syria. It was farcical for Clinton to suggest that her proposal was meant for taking stock of the situation when the fact is that she has been itching to bomb Bashar al-Assad for the last five years. Trump, by contrast, has never endorsed such a reckless measure. Ironically, he found an unlikely ally in President Obama, who characterized proposals like Clinton’s as “mumbo jumbo” and “half-baked.” That Secretary Clinton was willing to expend American blood and treasure and risk military confrontation with the world’s other nuclear superpower on behalf of Islamist rebels joined at the hip with Al Qaeda’s Syrian branch served as a stark reminder of her warped view on the appropriate uses of American military power.