Trump's Foreign-Policy Strategy Will Be Driven by Current Events 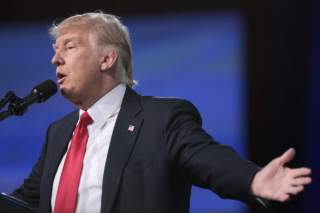 There is something both depressing and hilarious about the way Washington’s journalists and pundits are on a never-ending search by for President Trump’s foreign-policy doctrine, or in the way political scientists are trying to figure out the “school of thought” that best describes the current White House’s set of ideas about global affairs. Equally entertaining are the attempts by foreign-affairs analysts to place the new president’s hodgepodge of foreign-policy decisions in some context, in the form of a grand political narrative, to provide it with some meaning.

Trump’s “America First” campaign rhetoric included attacking U.S. “regime change” policies, lashing at American military interventions in the Middle East, and bashing the North Atlantic Treaty Organization as “obsolete.” This suggested to his internationalist critics that he was an “isolationist” and implied to his right-wing nationalist fans that he was one of them. Free traders panicked after candidate Trump pledged to renegotiate the North American Free Trade Agreement. Meanwhile, protectionists hailed his threats to designate China as a “currency manipulator” and to impose punitive tariffs on its imports, and economic nationalists hailed his challenge to the bipartisan U.S. commitment to liberalizing free trade.

Indeed, intellectuals—or those who pretend to be intellectuals—believe that national policies are based on a specific conceptual framework, and tend to examine foreign-policy decisions made by the White House as a reflection of a president’s political philosophy and the outcome of battles of ideas between his aides.

Intellectuals certainly feel in metaphysical heaven when they imagine that a president is echoing their ideas. Hence, President Trump’s talk about working together with Russian president Vladimir Putin and Syrian leader Bashar al-Assad in the fight against the Islamic State was supposedly a clear indication to his supporters that he was a realist when it came to foreign policy. If Bismarck and Metternich had a son, that son would have been Trump, and Kissinger would have played the role of his godfather.

So now, in the name of upholding international norms against the use of chemical weapons, President Trump ordered a U.S. missile strike against a Syrian airbase. Operating under the emotional impact conjured by television images of “beautiful babies,” has President Trump been transformed into a born-again idealist?

And what’s next? After celebrating Montenegro’s joining NATO, will the internationalist President Trump lead an effort against Russia’s threats to the liberal international order?

When campaigning for the president, Trump regularly condemned China over its trade and pledged while criticizing South Korea and other U.S. military allies in the region. Now he seems to be willing to give China a pass on trade while mobilizing U.S. partners in the region as part of a possible military campaign against North Korea, aimed at safeguarding international rules against nuclear proliferation.

So it’s not surprising that many foreign-policy experts now feel a bit disoriented. So maybe Trump, who seems to relish bombing the hell out of Syria, ISIS and North Korea, is a lifelong Jacksonian? Or do his recent moves on China signal the victory of the Goldman-Sachs-allied members of the Hamiltonian wing in the White House?

And notice the way the Wilsonians in Washington, DC are now applauding his policies, including liberal internationalists who were critical of former President Barack Obama’s decision not to retaliate against President Assad’s use of chemical weapons against civilians. So what’s going on here?

The short and simple answer to that is that Donald Trump has never been a man of great ideas, and has never pretended to be one. Unlike the men who were elected as president in the post–World War II era, Trump has never embraced a coherent view of world affairs or spent a lot of time reading or being schooled about the subject before he was elected president. Unless you consider listening to the foreign-policy experts of Fox News as the equivalent of auditing courses in international relations, or chatting about Middle East policy on Howard Stern’s radio show as the appropriate forum for articulating foreign-policy doctrines.

Trump’s internationalist critics have suggested that his decision to adopt the “American First” slogan once associated with the pre–World War II anti-interventionist movement indicates that he supports an isolationist foreign-policy agenda. In fact, Trump has probably never heard about the America First Committee and decided to tag his foreign-policy approach “America First,” after a New York Times interviewer used the term.

If anything, the notion that every president has embraced a coherent and consistent foreign-policy doctrine is in itself a myth, or a form of apophenia, the propensity to see meaningful patterns in what are sometimes nothing more than random events.

Indeed, many of the important decisions on foreign or domestic policies by presidents amounted in many cases to ad-hoc responses to unexpected developments and involved a lot of muddling through, which at some point may or may not have evolved into what can be described as a grand strategy.

Much of what has been said and written about the evolution of the Truman Doctrine and the start of the Cold War makes it clear that there was nothing preordained in the form of a grand strategy vis-à-vis the Soviet Union when Truman entered office. Most of the decisions Truman made were the outcome of what could be described as the mix of “impulsive” responses to Soviet behavior and the strategies drawn up by his leading military and diplomatic aides, who had sometimes failed themselves to act in accordance with a coherent doctrine, when it came to Chinese moves in Taiwan (then Formosa) and Korea.

There was certainly nothing inevitable about President Woodrow Wilson’s decision to get the United States involved in the Great War; after all, he had pledged American nonintervention in the European war during his presidential campaign. And, who knows? If he had followed through with that election promise, we would be referring now to a liberal noninterventionist as a “Wilsonian” and not as a “Jeffersonian.”

In fact, President Jefferson proved to be less than a dogmatic “Jeffersonian” in the case of the Louisiana Purchase or in his military intervention in the Barbary Wars. Meanwhile, President Ronald Reagan’s 1983 cut-and-run decision to withdraw U.S. troops from Lebanon following a devastating terrorist attack didn’t seem to fit into his own “doctrine.”

The advantage that many of the President Trump’s predecessors had was that they were never under pressure from the 24/7 media environment to articulate their foreign-policy strategies. They were typically subjected to that level of scrutiny late in their presidencies, after they had tested and retested various policy options and made a lot of mistakes in the process.

This pragmatic—if not empiricist—approach to solving political and economic problems, and the distrust of dogmatic thinking, is very much a distinguishing Anglo-American trait. That explains why a businessman like Trump resists embracing political and economic doctrines and is ready to abandon them and adjust his policies to the changing realities. To quote British economist John Maynard Keynes, “When the facts change, I change mind. What do you do, Sir?”

“I don't have to have one specific way, and if the world changes, I go the same way, I don't change,” Trump said a day after the chemical-weapons attack in Syria that steered him to order airstrikes against a government air base. “Well, I do change and I am flexible, and I'm proud of that flexibility,” he explained, leading one pundit to suggest that he had adopted a doctrine of flexibility, which in itself in a contradiction in terms.

That Trump’s nationalist enthusiasts, as well as internationalist detractors, have harped almost nonstop on the role that Steve Bannon, former executive chairman of Breitbart News Network and a self-proclaimed “economic nationalist,” has played in the presidential campaign and currently in the White House. That can be understood as another attempt to tag candidate and President Trump’s worldview, or Trumpism.

But what if what some refer to as Trumpism, that mishmash of nationalism and populism, was just another stage in Trump’s continuing political evolution; let’s call it the Bannonist Period, during which he was fashioning a message that helped him win the support of those blue-collar workers in the Rust Belt?

And now that he has settled in Washington and is getting more policy advice and guidance from his neighbors, the members of once derided foreign-policy establishment, as he responds to crises in the Middle East and East Asia, is it possible that the may be entering into the Kushner-Cohn-McMaster Period? And how long will that last?