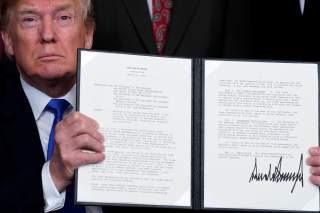 Late Monday, President Donald Trump announced tariffs on “roughly $200 billion of imports from China.” These tariffs are on top of the ones imposed this summer on $50 billion of products from that country.

The latest round of tariffs took observers by surprise. Many thought Trump would not impose the second round of tariffs until after a Chinese delegation concluded negotiations in Washington, scheduled for September 27 and 28, or until after the November midterm elections, especially because Beijing recently issued threats.

Monday, therefore, was a great day for the United States. After the Chinese had threatened, Trump called their bluff. Now, all their next moves hurt them more than they hurt America.

There must be consternation in Beijing because the Chinese have not seen, since Nixon, an American leader who has opposed them across the board. To prevent a new round of tariffs, an unnamed “senior official who advises the leadership on foreign policy matters” over the weekend dropped hints that, if the White House went ahead with the tariffs, China would not send representatives to Washington for the planned late-September meeting.

The threats against Apple this month followed China’s extortionate demands on the company in August.

In the past, threats like these would work against American presidents. For four decades, Washington policymakers thought the United States should support China’s Communist Party.

Trump, however, has a different perspective. His concern about China’s trade predation has been the one constant theme of decades of his thinking, so Beijing’s two threats did not work this time.

Trump had every reason to ignore them. First, he has consistently believed that Beijing needed America far more than America needed China, largely because China is the country running large trade surpluses. Last year, China’s merchandise trade surplus against the United States hit a record $375.6 billion. As Trump knows, trade-surplus countries get mauled in “trade wars.” Therefore, Beijing, not Washington, is the party that needs to talk to reduce tension.

Second, the various threats to not sell components to American manufacturers is extremely short-sighted. China prospered in the four decades of its so-called reform era—Beijing will mark the fortieth anniversary of the beginning of that historic period this December—in large part because it convinced companies to manufacture in the country. In short, China made itself an indispensable member of global supply chains.

Yet the Chinese could not help themselves. In disputes with Tokyo and Seoul both last decade and this one, Beijing retaliated against Japanese and South Korean companies, often whipping up street protests against them. That has encouraged those countries to move operations out of China and down to Southeast Asia.

American companies look like they will be the next to move out, as Xi Jinping, the willful Chinese ruler, threatened to “punch back” in June. This summer, Chinese officials, worried that companies would leave China, have denied any intention to punish American businesses—the South China Morning Post that month reported Chinese officials said retaliating against foreign companies had “never been on the cards”—but by now it’s clear that retaliation is indeed policy. U.S. companies are not, for instance, getting licenses from Beijing and are the objects of minor harassment.

Showing fangs, Xi is going to have an increasingly hard time convincing companies from, say, Europe, to put themselves in the position of future hostages.

Despite all the triumphalist talk in the Chinese capital, China needs foreign technology and knowhow and perhaps even foreign money. For one thing, economic indicators for August came in below already low expectations with one notable exception. Inflation exceeded forecasts.

A few years ago, China suffered from persistent deflation. Now, it is beginning to have the opposite problem. Yet despite inflation, Beijing has been printing money at a rapid clip, thereby aggravating the problem. In a six-day period this week and last, the People’s Bank of China, the central bank, injected the renminbi equivalent of almost $90 billion into the economy.

More money, of course, means more inflation. Chinese leaders know the dangers of more inflation. There are two particular concerns. First, runaway inflation caused unrest that preceding the regime-shaking events during the spring of 1989, when Chinese protested in Beijing and 371 other cities.

Second, debasing the local currency, the eventual result of inflation, can trigger capital flight. Bloomberg estimates that net capital outflow in 2015 amounted to $1.0 trillion. In 2016, that amount increased, perhaps to $1.1 trillion. In 2017, outflow declined sharply, but only because Beijing imposed even more draconian capital controls, many of them unannounced.

So the central bank’s injection of large amounts of cash looks like a sign of desperation, undoubtedly the result of concerns over Trump’s tariff campaign.

The Chinese economy has everything but the confidence of Chinese people and businesses, something evident from tumbling Chinese stock markets and a falling currency. President Trump and his senior economic advisor Larry Kudlow have remarked about China’s precarious situation from time to time this year.

“We are looking forward to a more beautiful counter-attack and will keep increasing the pain felt by the U.S.,” remarked the Global Times, the tabloid controlled by the authoritative People’s Daily, and on Tuesday Beijing’s Ministry of Commerce promised “synchronized countermeasures.” Xi Jinping, despite the paper’s boast and the government’s threat, is running out of options, and Trump realizes the Chinese leader’s predicament.

“If China takes retaliatory action against our farmers or other industries,” Monday’s White House statement notes, “we will immediately pursue phase three, which is tariffs on approximately $267 billion of additional imports.” President Trump is not giving up, and unlike Xi, he has real options.