Trump's India Visit Was Little Substance and All Show 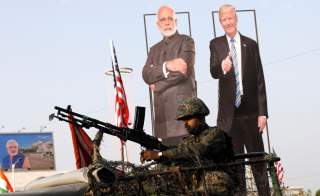 India’s prime minister, Narendra Modi, has Donald Trump’s number.  More to the point, he understands the president’s obsession with numbers. How many people attended Trump’s inauguration? You guessed it.  More than were present at any previous presidential inauguration. Trump’s IQ?  Right again; it’s “one of the highest” and exceeds that of several really smart people, including, of course, former President Barack Obama. The intelligence of the participants on Trump’s former television show, The Apprentice?  Well, they are geniuses with IQs that nudge two hundred.  And so it goes.

Little wonder then that Modi assured Trump that vast numbers of admirers—five to seven million people, according to the president—would show up to greet him in Ahmedabad, the largest city in Gujarat, Modi’s home state.  Let’s go with a charitable interpretation: something must have gotten garbled in translation. Ahmedabad’s population totals 8.6 million, so even Modi, who has his own fascination with numbers (he claims to have a fifty-six-inch chest), couldn’t possibly have mobilized his many minions to muster a crowd that met Trump’s outlandish expectations.

The prime minister did deliver on another front, though. He doubtless knows that Trump loves big walls and had some built to grace the occasion. Modi’s wall was four feet high and nearly a kilometer long.  Its purpose: to ensure that the president’s delicate sensibilities wouldn’t be offended by the sight of slums during his motorcade from the airport.  India’s poor population apparently shame Modi and had to be erased for the August occasion, which lasted all of thirty-six hours. Trump then promptly departed, having seen the Taj Mahal as well the fawning posters hailing the greatness of the American president and his host. An example: “Two Dynamic Leaders: One Momentous Occasion.”  Kim Jong-un couldn’t have done better.

In the end, all of the pageantries didn’t produce anything remotely momentous—something the Beltway commentariat acknowledged while nevertheless touting Trump’s trip as a big deal, presumably because he and Modi and Trump heaped praise on each other and their two countries.  In his “Namaste Trump” welcome speech, Modi flattered Trump by calling him “my friend” and “a man who thinks big.” He also complimented the first lady, Jared and Ivanka. Trump reciprocated, showering Modi with compliments. He also lauded India’s ancient civilization, though he referred to the Vedas as the “Vestas,” mangled the name of the iconic religious figure, Swami Vivekananda, and, for good measure, those of two Indian cricket stars.

But this is small stuff. Gaffes like these during political summits make for amusement but are soon forgotten because they don’t really matter. The same can’t be said, however, about the homage Trump paid to India’s democratic polity and diverse society while Modi, who has eroded Indian democracy in multiple ways, shared the dais and watched with delight. Later, at a news conference, Trump said that he had discussed “religious freedom” with Modi and that “the prime minister was incredible in what he told me. He wants people to have religious freedom and very strongly.” This much can be said about Modi’s assurances: They lack all credibility, though that’s not what Trump meant.

Consider Modi’s track record. Last August, his government stripped Kashmir, India’s sole Muslim-majority state, of its constitutionally-guaranteed autonomy and bifurcated its territory to boot. The Citizenship Amendment Act (CAA), which became law in December, gives migrants who entered India illegally in or prior to 2014 rapid access to citizenship regardless of their religion—unless it happens to be Islam.  The National Register of Citizens (NRC), another BJP initiative, threatens to disenfranchise millions of India’s poor and minorities, notably Muslims who came to India from neighboring Bangladesh because they are the least likely to have birth certificates.

None of this should be surprising.  Modi’s Bharatiya Janata Party (BJP) and the Rashtriya Swayam Sevak Sangh (RSS), a militant Hindu nationalist movement that was established in 1925 and has long served as the BJP’s ideological wellspring, stand for “Hindutva”: India as a Hindu nation, never mind that India contains nearly two hundred million Muslims—only Indonesia and Pakistan have more—and that its constitution embraces secularism and prohibits religious discrimination.

Violence against Muslims in Modi’s India has soared and, in fact, become routine. And it erupted again while Trump was still in India. This latest bout of bloodletting continued once he left and has killed nearly forty people so far, mostly Muslims. There were exemplary instances of Hindus coming to the rescue of Muslims during this latest orgy of violence but despite such uplifting acts of individual courage and compassion, the larger reality is that since Modi became prime minister in 2014, the BJP—in the center and in the states that it rules—has made Indian Muslims feel marginalized, unwanted, and vulnerable to a degree that no previous Indian government has. Indian democracy hasn’t fared well under Modi either.

Trump’s paeans to Modi’s stewardship of India’s democracy and diversity are, in short, a travesty—indeed a denial of reality. Yes, the president was visiting India in an official capacity, so it’s unreasonable to expect him to have pilloried his host. Still, he could certainly have ditched the sugary portrayals of Modi as the avatar of democracy and tolerance given that the prime minister has been precisely the opposite. But then again, given Trump’s record in both these realms and his troubled relationship with facts, that would have been surprising.

For all the fanfare and expense, the tangible results of Trump’s trip proved were meager.  Shortly before his arrival in India, the Modi government, in a transparent effort to please him, announced that it would purchase twenty-four naval attack helicopters from the United States to the tune of over $2 billion. That won’t make much difference, except for the manufacturer of the choppers. Though India’s purchases of Russian arms have declined in recent years, the bulk still come that country or are manufactured locally under Russian license. That’s not about to change anytime soon.

Modi’s government also persisted in its feverish effort to conclude a partial trade deal with the United States, again with the obvious goal of addressing Trump’s obsession with the trade gap between the United States and India. In the end, however, there wasn’t even a mini-deal, which would have opened Indian markets to American farm products and some manufactured goods, including Harley Davidson motorcycles, an issue on which the president has been fixated. No matter. Trump, true to form, declared that the failure to reach a trade agreement was, in fact, a success because it would pave the way for a more comprehensive deal down the road. At a press conference in New Delhi the president, using one of his favorite adjectives, announced that his team was in the “early stages of a discussion for an incredible trade agreement.”

The two sides did agree to ramp up counterterrorism cooperation, and India undertook to buy more liquefied natural gas from the United States. But neither of these were contentious matters. And Trump again offered to help ease tensions between India and Pakistan. Like past Indian prime ministers, Modi has adamantly opposed any external mediation on the Kashmir dispute and duly ignored Trump’s offer, which means that it has no practical effect.

Despite the lack of any truly consequential accomplishments, Trump and Modi have reason to be pleased with their meeting and will invoke it to boost their political standing at home. Trump will recall the pomp and circumstance surrounding the visit to burnish his image on the campaign trail and raise money from well-heeled Indian Americans in order to stock his election coffers. Modi has faced widespread public political discontent (including mass protests) over the CAA, the NRC, and a slowing economy (its growth rate is the worst in ten years). The drama of hosting an American president provided him a respite of sorts as well as cachet and symbolism that he will surely utilize to his political advantage.

Both leaders are masters of the political theater. Adept at revving up their respective electorates with showmanship, they love the limelight. On this occasion, it lasted all of thirty-six hours but they held center stage, and that made it all worthwhile.

Rajan Menon is the Anne and Bernard Spitzer Professor of International Relations at the Powell School, City College of New York/City University of New York, Senior Research Fellow at the Saltzman Institute of War and Peace Studies at Columbia University, and a Fellow at the Quincy Institute for Responsible Statecraft.

Sumit Ganguly holds the Rabindranath Tagore Chair in Indian Cultures and Civilizations and is a Distinguished Professor of Political Science at Indiana University, Bloomington.  He is also a Senior Fellow at the Foreign Policy Research Institute in Philadelphia.