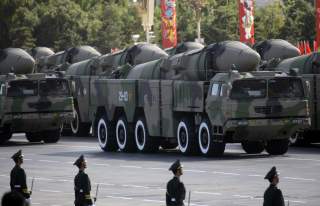 Most of the debate over the administration’s decision to leave the Intermediate-Range Nuclear Forces Treaty is missing the point. Thus far, the commentary has focused on whether the decision bodes good or ill for arms control and nuclear proliferation.

That’s small ball. By pulling out of the INF Treaty, President Donald Trump is making a big statement about great-power competition.

From Checkers to Chess

When the administration said it wanted out of the decades-old treaty meant to limit cruise and ballistic missiles in the range of 500 to 3,500 miles, the responses proved predictable. Arms-control advocates registered outrage. Russian president Vladimir Putin pouted. Europe experienced angst. Advocates for abandoning the treaty no doubt traded high-fives.

Admittedly, the immediate issue is about the treaty and concerns over Russian compliance. The State Department has made the case that Moscow is cheating. Russia has deployed at least two battalions of the Novator 9M729 land-based cruise missile (known to NATO as the SSC-8). Given its range, this is a clear violation of the terms of the INF Treaty.

Of course, Russian cheating is nothing new. It’s been going on since at least 2014. President Barack Obama’s team raised the issue with the Russians but did little more than send diplomatic notes.

Shortly after coming into office, President Donald Trump warned Putin to clean up his INF Treaty act. The United States has given Moscow multiple opportunities to come back into compliance with the INF Treaty.

Cheating aside (not that the United States should put cheating aside), this treaty was put in place for a specific purpose: it was part of a comprehensive bargain between Ronald Reagan and Mikhail Gorbachev to bring the Cold War to an end. Just because it served a useful purpose then doesn’t mean it serves a useful purpose now.

Of course, for arms control bean-counters, who just play checkers, the treaty still makes sense. If there are more treaties, they argue, then the world is safer.

But treaties don’t control arms. Sovereign nations control arms. Treaties simply aid them in implementation when all parties see that the process is beneficial to their interests.

Things have changed. Russia is not the Soviet Union. Putin is not Gorbachev. The world America faced when disco was king is long gone.

Putin doesn’t have staying power to fight a long, protracted war with the West. He can only threaten Europe in a conventional conflict if the Russian military can fight and win quickly before the transatlantic power can mobilize a response.

To immobilize the West in a blitzkrieg war, intermediate-range missiles (exactly the kind the strategy prohibits) would provide Putin a serious advantage. He could hold virtually all of Europe hostage while his troops marched wherever they wanted. That’s why cheating is important for Putin. That’s why the treaty isn’t working.

The United States can’t counter Moscow with one hand tied. And there is more at stake than the balance of power between Washington and Moscow. America also has to keep an eye on China.

The INF Treaty covers more than nuclear forces. It also prohibits conventional missiles with INF Treaty ranges too. And in the world of today, as China charges hard to expand its military power and reach, the United States is increasingly at a disadvantage. It is constrained by the INF Treaty; China is not. If Russia is not going to adhere to the treaty, then the risk of the United States being the only country in the world self-constraining itself is too significant. Many Chinese ground-based missiles, such as the CJ-10 Chinese land-attack missile, have ranges which are prohibited to the United States due to the treaty.

Because of the imbalance imposed on the United States by the treaty, Washington is hamstrung in expanding deterrence in the Indo-Pacific region, while China has no arms-control restrictions in building out its missile force.

The Trump administration has rightly recognized that the INF Treaty was having a deleterious impact on Washington’s ability to manage great-power competition. Withdrawing from the treaty removes a legal barrier that dangerously hampered Washington’s capacity to extend its nuclear deterrent umbrella in both Europe and the Indo-Pacific region.

The status quo gave both Russia and China a geostrategic free lunch. By playing chess, Trump has raised a significant challenge for Beijing and Moscow. If they build more, we’ll build more missiles—and more missile defenses. Or, they can negotiate and honor a new, twenty-first century arms-reduction treaty that deals with twenty-first challenges.