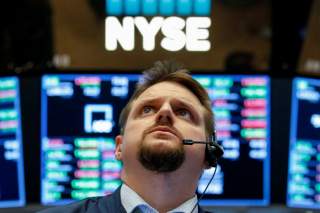 President Trump’s decision to withdraw the United States from the Iran agreement may be the most dangerous and destabilizing move yet of his tumultuous presidency. The Joint Comprehensive Plan of Action (JCPOA) is properly viewed as a triumph of multilateral diplomacy and a major step toward two major goals properly embraced by any responsible government: nuclear nonproliferation, and long-term stability in the Mideast. Even those skeptical of the agreement when reached in 2015, such as General James A. Mattis, now Secretary of Defense, have argued now it would be a mistake to withdraw.

President Trump’s unilateral withdrawal will have a host of damaging geopolitical consequences. On top of that, it may also hit America in the pocketbook and damage our economy.

The Iran agreement had the formal support not only of our major allies (the United Kingdom, France, Germany and the European Union) but our most significant rivals (Russia and China). By walking away from it, President Trump risks reigniting Iran’s nuclear program; he has raised the ceiling on Mideast regional violence in numerous proxy wars; he has ended decades of measurable progress toward a world where nonproliferation is the norm and nuclear weapons the exception; he has driven Iran into the arms of Russia and China; and he has weakened the transatlantic alliance with Europe that has safeguarded the world since 1945.

Beyond all that, Trump may have set the ground for his biggest disruption yet in our world trading system. By undoing TPP, redoing NAFTA, rebalancing the U.S.-Korea Free Trade Agreement and threatening to impose tariffs on Chinese and other goods, he has unsettled each of America’s trading partners in different ways. But the withdrawal from the JCPOA threatens to disrupt all our trading partners, all at once. The greatest harm will be suffered by our closest allies, and the greatest benefit will flow to our greatest rivals. Withdrawal is therefore geopolitical folly and economic destabilizer, all at once.

In withdrawing from the agreement, President Trump promised that powerful U.S. sanctions would be imposed on Iran—and also on U.S. companies that violated those sanctions. So-called “secondary sanctions” will also punish foreign firms that trade with Iran. Further, they may punish U.S. firms that do business with those firms. These U.S. sanctions will apply to firms based in Europe, Canada, Japan, Korea, India, Latin America; in other words, our largest and closest trading partners. They will theoretically impact firms based in China and Russia, but Russia is already fighting back with counter-sanctions legislation and no one expects China to rein in its companies who are already rushing into the vacuum left by the U.S. withdrawal. If we force European and other companies out also, that vacuum will be even greater and so will the Russian and Chinese opportunities.

Explaining the new Iran policy, Secretary of State Mike Pompeo made clear in a speech at the end of May that sanctions are at the heart of the Trump strategy. “[W]e will hold those doing prohibited business in Iran to account,” he said, to apply “unprecedented financial pressure on the Iranian regime.” He conceded that “our reimposition of sanctions and the coming pressure campaign on the Iranian regime will pose financial and economic difficulties for a number of our friends”—but suggested no letup of that pressure.

Following up, teams of U.S. officials are meeting with counterparts in Japan, Eastern Europe and elsewhere to pass the message that the United States is serious. “We will hold those doing prohibited business in Iran to account,” said Treasury Under Secretary Sigal Mandelker.

In raising the threat of wide-ranging sanctions, President Trump and Secretary Pompeo have committed the United States to a trade war not just with Iran, but potentially with every major trading nation on the globe. Whether that trade war now comes to pass depends on the strength and vigor of U.S. enforcement of the sanctions regime; on the strength and vigor with which the Europeans Russians and Chinese fight back; and on the extent to which our significant trading partners—Canada, Japan, Korea, India, Brazil to pick a few—pick one side or another, or simply look away while their companies trade illicitly.

The bottom line is that while Trump’s Iran move is being largely analyzed in geopolitical terms, in fact the widest immediate impact may be on businesses, and on global markets which have already seen volatility indices spike in recent weeks. In other words, this one isn’t just for the foreign-policy specialists and politicians. CEOs had better be paying attention.

Sanctions are central to Trump’s strategy toward Iran. Trump and his key advisors John Bolton and Mike Pompeo believe that every dollar (or euro or ruble or yen) that is directed to Iran goes straight to the pockets of hard-liners and funds their disruptive behavior abroad. Those funds, they believe, make the world less safe and only serve to strengthen an autocratic regime. Trump’s goal is to bring the Iranians back to the negotiating table by starving them of foreign funds and foreign goods.

The Europeans hold just the opposite view: that it is essential to keep commerce with Iran flowing, as that was the inducement that caused Iran to radically scale back their nuclear ambitions. Moreover, the more Iran trades and mixes with the world around it, the greater the pressure on the mullahs to modernize and on the people to press for freedom. In the European view, then, every euro (or dollar or ruble or yen) that makes it to Iran forces it out into the more transparent global-trading system and weakens the closed theocratic system on which the mullahs rely.

This difference between the views held by the Americans and the Europeans is almost theological in intensity. There is also a vast difference in their views over the value of multilateral diplomacy and agreements, and over dialogue versus force as the best solution to solving global problems.

And those theological differences are precisely why businesses must be concerned lest they be caught in the crossfire.

A sanctions war is not just government-to-government. Rather, each government impresses its own businesses and citizens and makes them draftee soldiers in the battle. The economic power of private actors is harnessed against the enemy, and actors that violate the sanctions—whether our guys, their guys, or third-country players with no direct interest in the matter—must be summarily punished.

If U.S. sanctions are met with counter-measures (such as a “blocking statute” that would protect European and other actors from U.S. sanctions) or counter-sanctions (aimed at U.S. companies that now refuse to deal with European companies under U.S. sanction), then businesses in effect become hostages. The cold-blooded logic of economic warfare is that these hostages must be punished, often severely. BNP Paribas, the French bank, was fined almost $9 billion by U.S. authorities in 2015 for evading sanctions against Iran, Cuba and Sudan. ZTE Telecommunications, a Chinese handset manufacturer, was fined $ 1.2 billion in 2017 and then more recently barred from using U.S. components because of its forbidden trading with Iran and North Korea. Just this week, ZTE agreed to pay another $ 1 billion fine to the United States to avoid what would have been an effective death sentence. The power of sanctions. In the weeks ahead, we will learn whether we are facing a war of mutually-increasing sanctions, as the Europeans and other signatories react to the American sanctions threat. Russia has enacted legislation to fight back against U.S. sanctions by threatening to punish Russian firms (and foreign firms doing business in Russia) that comply with the United States. China has been and will continue to be the largest purchaser of Iranian crude, and it will be in a position to step into the shoes of international players frightened away by U.S. sanctions. Indeed French oil giant Total, in suggesting it might step away from its proposed $5 billion development of the Pars field in Iran, made clear its Chinese partner would step into its shoes if it did.

The Europeans face a more complex calculus. They are the most wedded to the multilateral diplomacy behind the Iran deal, and to the prospect of positive change in Iran wrought by engagement. They are also most angered by our president’s Trumpian ways. In the words of Donald Tusk, the EU president, “With friends like Trump, who needs enemies?” The French finance minister called for proud resistance: “Do we Europeans want to be vassals standing at attention to obey the decisions of the United States?” On May 18, European Commission president Jean-Claude Juncker proposed a series of measures including a “blocking statute” that would forbid EU companies from obeying U.S. sanctions law and protect them against fines and penalties, as well as a mechanism to permit member states to make direct payments to Iran for oil without using U.S. financial institutions subject to sanction. “[W]e have the duty,” he said, “to do what we can to protect our European businesses, especially SMEs.” On June 6, the EU formally updated its blocking statute to protect against U.S.-Iran-related sanctions.