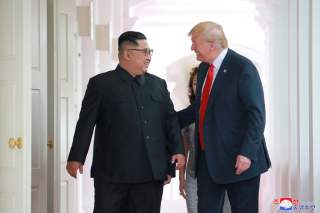 The debate over the Trump-Kim summit in Singapore has been quite vitriolic. Defenders of President Donald Trump have been out in full force all week defending the deal, and Trump himself has claimed that North Korea is no longer a nuclear threat. Similarly, proponents of engagement have claimed this to be the start of a peace process. In South Korea, the mood is upbeat. South Korean conservatives have been marginalized this year, losing the recent election badly, which was in part a referendum on the peace process. The biggest national papers are resistant, but the wind is decidedly at South Korean president Moon Jae-in’s back. It has been only a small group of Never-Trump hawks and skeptics who have pushed back.

Much of this sound and fury is curious, because the summit itself produced so little on its own terms. On BBC in the wake of its release, I called it a “nothingburger,” and I still see no reason to revisit that judgment. Defense of the “Sentosa Declaration” rests on the idea that great things are to come. And as Trump has said ever more embarrassing things this week—gushing about Kim Jong-un, ducking human rights, or claiming the North Korean nuclear threat to be taken care of—defenders of the deal have had to promise ever greater benefits we have yet to see. Secretary of State Mike Pompeo has predicted major disarmament in the next two years. This is, to be generous, highly unlikely.

We all want those benefits of course. Specifically, we all want a reasonable deal with North Korea that is balance-positive for the democracies. North Korea will not simply surrender CVID (complete verifiable irreversible disarmament) or improve human rights. We will have to bargain for those things. All but the most recalcitrant hawks will admit that. We are going to have to give up some things—on sanctions and aid most likely, perhaps military exercises and U.S. forces even—to get a deal. Claiming Sentosa to be a nothingburger does not prejudice a future deal one way or the other, because it says so little that it just kicks the can down the road yet again. I have argued for months that experts should be talking to the North Koreans, hammering out some deal. We—South Korea firstly, and then the allies—can then evaluate it.

So the goal is shared among enthusiasts and skeptics alike: not just a deal, any deal, but something broadly balance-positive for the South Korea, the United States, and Japan. That does not mean that we should be inflexible, but we should not make too many unilateral concessions either as Trump seemed to do last week. The final outcome is likely to be mixed, and we should have a spirited debate about how much we are willing to give up for how much from North Korea. And here is a start: South Korea has asked North Korea for a long-range artillery pull-back. The acid test of North Korean seriousness this year has always been its willingness to give up hard security concessions like this. At last this debate has started.

However, none of this is in Sentosa Declaration, which is why the herculean effort by both right-Trumpers and left-engagers to hype it is so odd. As Bruce Klingner has pointed out, little in the declaration was new. If anything, the language was disappointingly softer than earlier such declarations—a genuine surprise given Trump’s “art of the deal” reputation. As Vipin Narang pointed out, the declaration is similar to one struck between the United States and North Korea twenty-five years ago. Trump appended a nice touch—the retrieval of the remains of American missing in action from the war. But even regarding that, he could not help but lie about it. In the end, it was a wash, despite months of Team Trump hype about CVID and the Nobel. Even the day before the declaration was released Secretary of State Pompeo still talked of CVID and “rapid progress” among the technical groups in his Singapore press conference. Even when Team Trump all-but-knew the imminent declaration would a wash, they still hyped it. If the criticism has been blistering, this is why. Trump and his promoters promised us so much more.

Engagers will claim that none of this matters. If Singapore ignites negotiations, great; if it does not, then it was worth the try. This is an extraordinarily low benchmark for a leader-level summit, and analytically unsatisfactory. By this measure, no summit is ever a bad idea, so why not have the U.S. president do summits all the time?

The obvious reason is that the U.S. president’s time, focus and prestige, and that of the country, are resources too. “Presidenting” is hard as Trump has learned; presidential time and energy should be focused where they will make a difference. The more they are insouciantly shared, the more they diminish. The North Koreans have wanted a summit with the U.S. president for decades. They insisted on intricate logistics for Singapore to insure their man met Trump in a position of equality, with the North Korean flag next to the U.S. flag, even though the United States does not recognize North Korea for good reason. In retrospect, we know now that the North Korean delegation put far more effort into the optics than the technical work. This all but parallels Kim Jong-il’s demand for a huge bribe for the first inter-Korean summit in 2000. They did not come for a deal but for the PR—and they got it.

The United States could have traded these optics for a concession from the North, or withdrawn from the summit when it became clear that North Korea would give us nothing serious. It is now pretty obvious that the U.S. side knew for at least a week beforehand that the technical groups had made so little progress that the summit would likely be a wash. Why was it not delayed in that case?

Similarly, the North Koreans got a great propaganda coup out of this. This too was foreseen and a concession for which we might have demanded something. And in the evening press conference after the declaration, Trump floated even more concessions, including the unnecessary cessation of military exercises with South Korea without alerting the South Koreans. In the meantime, we wait for costly signals from the North.

So was the summit a failure or catastrophic? Of course not, and no one is saying that. But it was an unnecessary risk, given that its many problems and perils, even if some did not materialize, were evident months ago. Was it a success? Only by the lowest possible benchmark—of Trump forestalling a war which he ginned up next year. None of the working level talks to come required a prestige-ceding summit of this kind, so the coming claim that Singapore ignited peace talks is inaccurate. The North Koreans love to talk; they talked to us throughout the 1990s in the Agreed Framework, during the Sunshine Policy, and as a part of the Six Party Talks. In fact, they talk so much, that the United States had withdrawn from talks—strategic patience—because engaging North Korea had become never-ending process. In the end, the summit just kicks the can down the road, yet again, and back to the expert level and the South Korean president Moon, where it should have been all along.