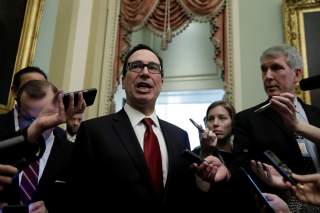 The State Department unveiled the new sanctions against Rosneft Trading SA—and its president, Didier Casimiro—over its relationship with Venezuelan president Nicolás Maduro at a press briefing on Thursday morning. Rosneft Trading SA’s state-owned parent company in Russia has been already under U.S. sanctions since 2014, but the newest move targets the energy giant’s international operations.

Venezuela exports most of its oil to India and China, but Rosneft Trading SA markets and transports a majority of this oil.

Abrams emphasized that the sanctions will also affect Rosneft Trading SA’s operations “that you may claim are unrelated to Venezuela,” but predicted that “the price of oil being paid by consumers around the world” will not be affected, as “U.S. oil production is forecast to reach record levels” this year.

He claimed that Russian foreign minister Sergei Lavrov “heard the message that this sanction was coming” at the Munich Security Conference last week. “What we’ve seen from Russia in the last year is all negative and all harmful when it comes to Venezuela.”

The Russian foreign ministry accused the Trump administration of working from “a petty desire to create windows for U.S. businesses which cannot compete fairly with Russian manufacturers on the international market” in a Spanish-language statement on Tuesday.

For the Trump administration, however, the sanctions were more about Venezuela than Russia. Venezuelan opposition leader Juan Guaidó has renewed his push to oust Maduro, meeting with President Donald Trump and Speaker of the House Nancy Pelosi in Washington two weeks ago.

“Today’s sanctions are another step in the policy of pressuring the Maduro regime to allow Venezuela to escape from its terrible crisis through free and fair presidential elections,” he said. “There will be more steps and further pressure in the coming weeks and months.”

Treasury Secretary Steve Mnuchin added the measure was meant “to prevent the looting of Venezuela’s oil assets by the corrupt Maduro regime” in his own press release.

The Venezuelan oil industry has been under U.S. sanctions since January 2019, when Venezuela fell into a constitutional crisis. Venezuela’s parliament declared Maduro an illegitimate president and nominated Juan Guaidó in his place, but Maduro refused to step down when the supreme court declared him the rightful president.

Guaidó initiated a military uprising in April 2019, with public backing from U.S. Secretary of State Mike Pompeo and U.S. National Security Advisor John Bolton. But his supporters failed to bring down Maduro, who declared victory over what he called a “coup d’etat.”

The United States, Europe, and the “Lima Group” of Latin American states recognize Guaidó as the legitimate president, but Maduro’s government continues to hold the reins of power. Trump has steadily stepped up sanctions over the past year in a bid to force Maduro to back down.

“We’re not trying to raise oil prices,” Abrams said. “We’re trying to diminish the amount of money available to the Maduro regime.”

Guaidó has gone on a whirlwind international tour in recent weeks. He met with Canadian prime minister Justin Trudeau and toured European capitals, in addition to attending the State of the Union address in Washington.

Maduro supporters assaulted Guaidó at the airport when he returned to Venezuela last week, and authorities arrested Guaidó’s uncle on “terrorism” charges, which Abrams called an “obvious and vicious effort to attack Guaidó’s closest advisors and his family.”

One reporter asked Abrams at Tuesday’s briefing why the Venezuelan government has not arrested Guaidó himself. She followed up with a request for “any information that due to U.S. sanctions, U.S. pressure campaign, the Maduro regime is any closer to coming to the table for negotiations.”

A palpable silence descended on the room.

“I’ll start with why have they have not arrested Juan Guaidó. One has to assume that they have made a cost-benefit calculation,” Abrams responded, after a pause. “I think they were thinking ‘oh, this guy’s fading away.’ So now they have to figure out what to do.”

“There’s no indication yet that they are seriously contemplating allowing the one step that would Venezuela to emerge from this crisis: a free and fair presidential election,” he concluded.