Trump's Leakers Have Only Made Things Worse 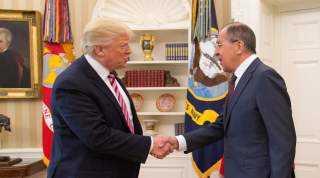 Suppose that a few months before 9/11, another country’s spies discovered that Islamist radicals were preparing to hijack airliners and fly them into buildings, with the United States as an obvious target. Would Americans expect that country to give us a warning? Would we be understanding if it failed to do so, on the grounds that protecting its own intelligence-gathering capabilities was more important than saving innocent Americans’ lives?

That’s one question to keep in mind as the Washington Post, the New York Times and other outlets claim that President Trump did something wrong by telling Russian officials about a new threat from ISIS—apparently a threat involving bombs concealed in laptop computers. The accusation, which as usual depends on framing provided by anonymous sources, is that the president shared information that came from an ally in the Middle East, and that based on what the Russians now know, they might be able to figure out who that ally is and what its intelligence resources in the region are. This, we are told, may dissuade the ally from sharing more information with the United States in the future.

There are several problems with this story, but the overarching question must be kept in mind: who decides when saving lives outweighs preserving somebody else’s secrets? Is this something for elected officials to decide—and in particular the highest elected official, the chief of the executive branch—or is it something that unelected officials with a habit of handing secrets over to friends in the media should decide? Legally, the answer is clear: the responsibility belongs to the president. However much the press or bureaucracy may despise him, the president has been chosen by the public precisely to make such top-level decisions. That’s the nature of representative government.

The national security advisor, H. R. McMaster, denies that President Trump’s warning to the Russians did, in fact, compromise any third-party intelligence source. McMaster knows exactly what was said: he was in the room when the president spoke to Sergey Lavrov and Sergey Kislyak. On Tuesday, McMaster characterized the president’s remarks as “wholly appropriate” and “consistent with the routine sharing of information” about terrorist threats. He said he was “not concerned at all” that any ally would hesitate to provide more intelligence in the future as a result of what the president told the Russians.

McMaster dismissed the idea that by naming a city in ISIS-controlled territory where the information came from, President Trump had supplied a vital clue as to how the intelligence was obtained. He made it sound as if the city the president named was one of many obvious places that anyone who keeps up with the news might mention: “You would probably be able to name a few cities, I would think,” McMaster told the press. “It was nothing you would not know from open-source reporting.”

Whatever risks arose here, McMaster claimed, came not from the president’s disclosures but from “those releasing information to the press” that can be used “to make American citizens and others more vulnerable.” Based on what the New York Times and Washington Post themselves have reported, there are reasons to think McMaster is correct.

First, consider this: if what the anonymous sources have claimed is true, and President Trump did reveal to the Russians clues about a U.S. ally’s intelligence resources, how would that ally know that this had happened? Knowing that a treasured secret had been given away might well be grounds for limiting cooperation with the Americans in the future. But no ally had grounds to believe anything of the sort had happened during President Trump’s meeting with the Russians—until anonymous sources started telling the Washington Post that this happened, and the Washington Post proceeded to tell the world, including whatever ally or allies might be worried.

In other words, certain unnamed officials are sowing distrust among America’s allies for the purpose of embarrassing the president. That distrust did not exist based simply on the knowledge that the president had met with Lavrov and Kislyak: the damage is done only when the substance of the meeting is made public by deliberate leaks. And not just that: these unnamed officials who have taken policy into their own hands have apparently told journalists much more and more sensitive information than has already been made public. As the Post acknowledged, “The Post is withholding most plot details, including the name of the city, at the urging of officials who warned that revealing them would jeopardize important intelligence capabilities.” So the source of the leaks not only seeded a narrative that would undermine allies’ trust in the United States—a narrative that would not readily exist absent the leaks—but the source also revealed to the media highly sensitive classified specifics. Who else might the source have revealed that information to? Who else might people at the paper have told?

The president has wide-ranging legal authority to declassify secrets, and if he did so in a discreet conversation with Russian leaders, with top U.S. national security official present, there is no scandal there—and would not be, even if an ally didn’t like what was said in the discussion. No ally or outside nation would even know, unless someone from the inside spread that information around. And that’s exactly what the Post’s anonymous sources have done.

The Post may have refrained from revealing everything that it’s source disclosed, such as what city in ISIS-controlled territory was the source of the warnings about the new threat. But the Post and the New York Times have indeed revealed information that provides useful clues to anyone who wants to figure out what ally might have supplied the report in question—information that the Russians may not have possessed until they read it in the American papers.

Note this passage from the New York Times: “the current official said that Mr. Trump shared granular details of the intelligence with the Russians. Among the details the president shared was the city in Syria where the ally picked up information about the plot, though Mr. Trump is not believed to have disclosed that the intelligence came from a Middle Eastern ally or precisely how it was gathered.”

That’s a bombshell: the Russians did not know, based on what the president told them, that the information they were getting could potentially compromise the intelligence assets of a U.S. ally in the Middle East. That angle only came to light when anonymous officials brought it to everyone’s attention—the Russians’ as well as the American public’s—by telling the press about it explicitly. (And now it’s reported, perhaps to no one’s surprised, that the Middle Eastern ally here is in fact Israel; this too has been revealed to the New York Times by “a current and a former American official familiar with how the United States obtained the information.”)

Let’s remember: the president has discretionary authority to declassify many secrets. Anonymous leakers do not have that authority—they are not elected at all, and they are not appointed to decide for themselves which secrets must be kept and which may be shared with the world.

The public value of what these sources has disclosed is dubious, all the more so because the narrative that has been built around the disclosures is misleading. President Trump did not overstep his authority, and if he behaved rashly in saying what he said to the Russians, it does not look as if he was more rash than whoever it is that talked to the Washington Post and New York Times—sources that have put the pieces together in such a way as to fill in the picture for the Russians and alarm America’s ally in the Middle East.

Can an anonymous source who does this much damage—who harms America’s relationship with an ally in the name of supposedly preserving America’s intelligence-sharing relationships—be taken at face value? If someone wanted to damage the relations between America and the Middle Eastern ally in question, this disclosure would be a good way to do it. The most likely rationale, however, is petty infighting within the administration, and between it and the federal bureaucracy.

President Trump is a man with few friends in Washington, perhaps least of all in the Republican wing of the foreign-policy establishment. Embarrassing him and undercutting him, even at a cost to America’s national-security relationships, may seem worth it to those who want to stop him from pursuing a foreign policy different from the one Washington is used to. The effect of the leaks, especially when they involve Russia, is always to push this administration away from new thinking and back toward the insider consensus that Trump was elected, in large part, to change. This remains true even though it is also true that Donald Trump is inexperienced and temperamentally impulsive—but that does not make his calculating and patient foes correct. Where the law is concerned here, they are clearly in the wrong. And they are morally in the wrong, too, where lives are under threat from Islamist radicalism’s latest tactic.