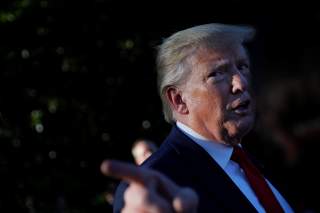 If you push someone, then you can naturally expect them to push back. Nation-states are no different. They will take measures they deem appropriate to ensure their survival. Right now, Iran poses no threat to the United States. But if the Trump administration insists on continuing its maximum pressure campaign, they very well could become one—the administration has successfully created a crisis where one previously did not exist.

During his campaign for president, Donald Trump complained endlessly about the Iran agreement. He said it was a bad deal and that it could lead to a “nuclear holocaust.” Despite this, as president, he recertified the deal two separate times in his first few months in office. Ultimately, the United States left the agreement in May 2018, with the administration arguing that Iran was secretly skirting the deal. But there was never evidence that Iran was violating the agreement, as the International Atomic Energy Agency (IAEA) has consistently reported.

Since that time, the United States has pursued a maximum pressure campaign with crushing sanctions, an indefinite military presence in Iraq and Syria, and unconditional support for the Saudis in the horrific Yemeni civil war. These measures are intended to prevent them from acquiring nuclear weapons (despite no evidence they were heading in that direction under the nuclear deal), but also to get them to stop funding proxies in places like Syria and Yemen.

To put it mildly, this campaign has failed miserably. Dialogue with the Obama administration convinced Iran to voluntarily forfeit its enriched uranium—maximum pressure has convinced the regime that it should get it back. Iranian proxies have not exited the fight in Syria or Yemen, and there is no reason to believe they will anytime soon. Iran has devoted significant resources to ensure that it has a friendly neighbor in Syria, and that the Saudis and the United States do not alter the current balance of power in the region.

In the wake of alleged Iranian attacks on Norwegian and Japanese oil tankers, the administration announced it would send one thousand more U.S. troops—joining the 1,500 troops announced last month—to the Middle East, specifically as a buffer against increased Iranian aggression. But reporting shows that Iran’s aggressive posture was a direct reaction to maximum pressure. This is a dangerous game.

To justify its actions, the administration is speaking out of both sides of its mouth. Trump officials say they don’t want war, but they are doing everything they can to force the regime to its knees, inevitably prompting it to lash out, leading to further escalation.

In an interview on Face the Nation on Sunday, Secretary of State Mike Pompeo asserted that maximum pressure will compel Iran to act like a “normal nation” but that it has also encouraged their aggressive behavior, such as the alleged attacks on the oil tankers.

According to Pompeo, what we have now are “a set of policies which will convince Iran to behave simply like a normal nation. And so you've seen them attacking international waterways trying to frankly drive up the price of crude oil around the world...” Which is it? Does maximum pressure produce normalcy or does it produce increased aggression? It cannot be both.

Pompeo went on to say that Iran’s uranium announcement was proof of the deal’s flaws, that it “had no capacity to actually stop” Iran from acquiring nuclear weapons. This is nonsense. If Iran does, in fact, begin to enrich more uranium, then it will be in direct response to the United States leaving the deal and doing everything it can to undermine it.

Why would Iran continue to abide by a deal that the most powerful nation on Earth is attempting to sabotage? When a bank repossesses your home after defaulting on your mortgage, it is not proof that the loan was a scam from the beginning. The IAEA has been clear on this: Iran has, to this point, been complying with the terms of the agreement.

President Trump may genuinely not want war. But he can’t have it both ways. The United States cannot continually antagonize Iran and then act surprised when the Iranian regime doesn’t heel. If the Trump administration truly doesn’t want a war with Iran, then it should drop its war-like posture.

Jerrod A. Laber is a fellow at Defense Priorities and a senior contributor for Young Voices. Follow him on Twitter @JerrodALaber.