This Is Trump's Moment of Truth on the Iran Deal 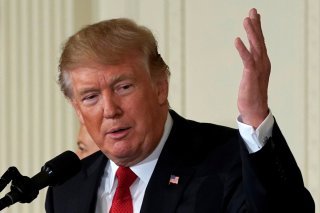 The president will decline to certify the Iran deal today, as confirmed by Secretary of State Rex Tillerson in comments to reporters Thursday evening. The move had been rumored for weeks (with a former senior White House official telling me in August that the president would make such a move), but now that it’s official, the proverbial ball is in a familiar court: with a Republican Congress dominated by members both deeply skeptical of the president and seemingly incapable of enacting his agenda. Only this time, global security is at stake. “I would laugh ...  but it’s no longer funny,” Julius Krein, editor of American Affairs, tells me.

“The president has come to the conclusion that he cannot certify,” Tillerson told reporters Thursday evening. “That the sanctions relief that we have provided is not proportionate to, in effect, the benefit we receive in that agreement.” Legally, Trump is using a provision in the Iran Nuclear Agreement Review Act of 2015 (INARA), which the secretary cited numerous times during his comments.

“What that sets in motion with the Congress is … three rough alternatives,” Tillerson said. First, “Congress can then decide to do nothing.” Second, “Congress can choose to reimpose the sanctions.” Tillerson explained that if Congress does, that means, from where he’s sitting, the end of the deal. “But there’s a third path,” Tillerson explained, it’s the way “the president is going to be suggesting that the Congress consider.” “Let’s use the INARA, and bend the INARA, to put in place some very firm trigger points … that if Iran crosses any of these trigger points, the sanctions automatically go back into place.”

It’s been widely reported that Tillerson and other senior officials were broadly skeptical of attempting to alter the Joint Comprehensive Plan of Action (JCPOA), but are compromising with a president wholly suspicious of an agreement brokered by his predecessor. For Tillerson, being the point person on this, at this juncture, is striking. Near openly feuding with the commander-in-chief in recent weeks, perhaps this is a show-me moment from President Donald Trump's perspective.

In effect, the administration—or the president, at least—has chosen a path that has been articulated by Iran Ultramontanists such as Sen. Tom Cotton, as well as neocon commentators such as Bloomberg’s Eli Lake. “President Donald Trump will not be killing your precious Iran nuclear agreement,” Lake wrote to supporters of the deal last week. “None of that means the U.S. will be unilaterally withdrawing from the nuclear deal.”

“Trump gets realist on Iran,” said the Washington Examiner editorial board Friday morning. “Trump will be pilloried by the press, by Democrats wed to former President Barack Obama's Iran approach, and by overeager Iran hawks. But if Trump plays his hand as we expect, it will be a boon to world peace and to U.S. interests.” Others, of course, don’t share a positive perspective on the president’s decision. This apparently includes Trump’s own secretary of Defense. Thus James Mattis—despite Tillerson and National Security Adviser H. R. McMaster telling the press that this decision was the result of months of careful study and consensus—testified to Congress that he thought the JCPOA served vital national security interests.

“Best case scenario is we keep more or less the status quo: a halt in meaningful Iranian weaponization progress. While at the same time, we don’t have to continue offering the concessions and space we do now,” a former State Department official tells me. “But worse case scenario is the reinvigoration of the Iranian nuclear program, collapse of U.S. non-proliferation credibility, a regional arms race and some kind of insane confrontation.”

Sina Toossi, an Iran researcher at Princeton, observes, “One major issue Iran has had since the JCPOA is that major international banks have remained hesitant to finance the big (multi-billion dollar) trade deals Iran is reaching, largely due to fear of potential new sanctions,” he tells me. “This has meant that sanctions relief hasn’t had nearly the impact that the Iranian public or [Iranian President Hassan] Rouhani expected. This new approach by Trump greatly exacerbates this problem.”

There aren’t the votes, at this point, to re-impose sanctions. But an entirely plausible scenario under this course is actually option 1, as laid out by Tillerson: that Congress does nothing, and the Senate fails to get 50 people to agree on anything. “We think it’s something they should be able to deal with in a fairly short order,” Tillerson said. “The next certification would come up in another 90 days. … If it takes longer than that, then there’s something I don’t understand.”

But that’s an entirely plausible scenario, and the administration knows it. It has 52 votes in the Senate, plus a consistently friendly ear in Sen. Manchin of West Virginia (but the administration is simultaneously also making a no-holds-barred push for his vote on tax reform).

It will therefore be a heavy lift. The foreign relations committee chairman, Bob Corker, is lead sponsor along with Cotton on the reform legislation. But how enthusiastic really is “Liddle’ Bob” to do the president’s bidding?  Rand Paul, Susan Collins and Jeff Flake will continue to be trouble spots for the administration; loss of their votes would likely sink the whip count to 49.

But there is a dark-horse option: Chuck Schumer, the Senate minority leader. Partisan considerations will likely keep him in check, but the senior Senator from New York has a long history of being more hawkish than his caucus, especially on issues pertaining to Israel. He could drag fellow Democratic hawks, such as Bob Menendez of New Jersey. The president’s speech Friday, as Tillerson emphasized, is expected to address Iran’s broader global impact, not just its nuclear program. This includes Tehran’s sponsorship of Hezbollah, very much back on the radar in Washington in recent weeks, which Tillerson argued has no raison d'être other than the tormenting of Israel.

“He likes us,” Schumer was caught telling a colleague on the Senate floor about the president in recent weeks. “He likes me, at least.” Time to see if Schumer likes Trump back?