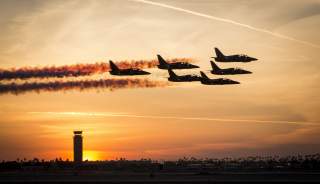 The National Defense Strategy (NDS) released last week is the first true U.S. defense strategy in a decade. It details how the Trump administration and Defense Secretary Jim Mattis view the military challenges facing the United States and how they propose to address them.

The strategy will likely guide Pentagon policy and decisionmaking for years. Fortunately, there is much to like in it.

For starters, it describes potential U.S. adversaries—as well as the current state of the U.S. military—more candidly and forthrightly than previous documents of its kind, including past Quadrennial Defense Reviews. For example, it refers to China’s “predatory economics,” a “weakening post–WWII [world] order,” and America’s “eroding military advantage.” Unlike previous defense strategies, this one leaves the clear—and accurate—impression that all is not OK.

Accompanying this refreshing honesty is a fresh, new thinking about defense strategy. It speaks about “enlarging the competitive space,” a new idea that encompasses the concept of presenting potential adversaries with challenges and dilemmas from unexpected areas and directions. In another first for a national-strategy statement, it calls for the U.S. to deliberately exploit vulnerabilities in the capabilities of U.S. adversaries.

Also refreshing is the fact that the document is elegantly written. This might not seem a substantive comment, but defense strategies often read and feel as though they were written by a committee. This document reads as though it was written by a single hand—or at least not by dozens of authors with disparate viewpoints. The result is a document that is remarkably coherent and understandable from end to end.

There is also consistency between the defense strategy and the National Security Strategy released by President Trump just one month earlier. When the NDS speaks to the need to “rebuilding military readiness,” it is picking up a critical theme established in the previous document.

To have real-world value, a defense strategy must establish priorities. That requires making tough choices, and in this document those choices are made. China has been clearly elevated to a top threat, as has Russia. Relegated to a lesser-threat category are Iran, North Korea and, most significantly, terrorism. This reverses the priorities of the last sixteen years and with good reason.

Defense administrative reforms are not calculated to dominate headlines, yet the importance placed on improved business processes is overdue and welcome. Mattis has identified establishing a culture of performance and improving speed of delivery one of the three main lines of effort in the NDS. Deputy Defense Secretary Patrick Shanahan’s industry-savvy hand is clearly evident in this section.

Many of the Pentagon’s business practices remain mired in the industrial age. For too long the department has tolerated long and irrational approval chains that, more often than not, resulted in disapprovals. Mattis seems committed to changing that.

In releasing the strategy, Mattis alluded to a “reorganization” of military cyber assets. He was vague on the details, but this is an area that is ripe for improvement. Current military cyber assets are sub-optimized, with each military service maintaining similar and redundant capabilities in their cyber service commands. For example, each service maintains the capability to defend its own networks. A more streamlined approach is sorely needed, allowing services to focus on broad areas of cyber warfare.

Critically, it sets too low a strategic goal. It calls only for U.S. to maintain the ability to “defeat aggression by a major power and deterring opportunistic aggression elsewhere.” Many are already referring to this force-planning construct as “1 +,” meaning the United States will have the ability to fight one war against a major adversary, and then vaguely deter another adversary. But deterrence is an elusive goal to plan against.

Deterrence requires will and capability, and in order to reasonably deter, the United States must present adversaries with the necessary capability to win. It is not at all clear that capability will be present if the bar is set too low.

To secure and protect American vital interests at an acceptable level of risk, the United States must have the ability to fight and win in two major theaters of war. This provides for sufficient capability to fight a major war and to have the ability to fight another should the need arise. A “two-war strategy” has been the gold standard for U.S. strategic goals since World War II because it most effectively protects U.S. vital interests while providing enough capacity to effectively deter opportunistic adversaries and sustain combat losses. It also frees forces for experimentation and allows for long-term, sustained operations.

Another shortcoming of the NDS is a de-emphasis on increasing the size of the military. President Trump’s National Security Strategy repeatedly called for beefing up our military, pointing out that America has “unwisely “reduced force size to the lowest levels since WWII.” The NSS describes the need to “grow the size of the force so that it is capable of operating at sufficient scale and for ample duration to win across a range of scenarios.” Although the defense strategy does say “the size of our force matters,” it doesn’t put nearly as much emphasis as the president did on regrowing the military to a size necessary to protect America‘s interests.

Secretary Mattis’ remarks at the event rolling out the strategy seem to buttress this interpretation. He said that he places more emphasis on capability (weapon systems) than capacity (size). There is no mention, for example, of the need to grow the Navy back to 355 ships, which most experts agree is necessary to counter China. This seems a missed opportunity.

Each of these two shortcomings—the reliance on a “1+” force planning construct and the de-emphasis on the need to regrow the force—may be the result of perceived budget constraints imposed on the military. They beg the question whether the NDS was driven by a budget. Time will tell.

Secretary Mattis stated that America is “emerging from a period of strategic atrophy,” a period when insufficient attention was paid to the most pressing issues the nation faces. The new National Defense Strategy corrects that deficiency in a clear and persuasive manner. Despite its shortcomings, it is a welcome contribution to the discussion of U.S. national defense.