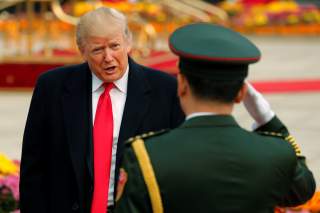 The newly-released U.S. National Security Strategy (NSS) is the most detailed document on President Donald Trump’s international agenda so far. It paints a sharp picture of a world order marked by growing strategic competition where China and Russia are seeking to “challenge American power, influence, and interests.” China, in particular, clearly appears as America’s main challenger economically and even geopolitically.

Although China was heavily criticized by candidate Trump during the presidential campaign, discussions with Beijing over the Korean peninsula in particular have so far been the main focus of the administration. The national security strategy suggests that Trump may be returning to his basic assumptions about great power competition, putting China back in the spotlight. In particular, the document underscores Trump’s desire to focus on trade, or rather, the unfairness of trade towards the United States.

In the context of China’s expanding influence and attempts to gain competitive advantages against the United States, the report notes that “China is investing billions of dollars in infrastructure across the globe” as it “exploits data on an unrivaled scale and spreads features of its authoritarian system.” The U.S.-China rivalry has rarely been so clearly expressed in an official U.S. strategic document.

This comes on top of ongoing efforts by the U.S. Congress, with strong support from the administration, to review the role of the body that reviews foreign investment in the United States—the so-called Committee on Foreign Investment in the U.S (CFIUS). Prominent administration officials such as Commerce Secretary Wilbur Ross are said to be in favor of a more aggressive review of foreign investments in the United States.

More surprising is the document’s mention of China’s “strategic foothold” in Europe, “where it is expanding its unfair trade practices and investing in key industries, sensitive technologies and infrastructure.” While warning against China’s expansion in Europe, the NSS is suggesting that America can cooperate with its European allies to “contest China’s unfair trade and economic practices and restrict its acquisition of sensitive technologies.”

Whether European leaders are ready to play ball with Trump against China is uncertain, however. Chinese foreign direct investments in the EU have been on the rise for the past decade, reaching €35 billion in 2016, according to the Berlin-based Mercator Institute for China Studies. This has included Chinese takeovers of companies in robotics, semiconductors, machine-tools, telecoms, agribusiness, food, as well as infrastructures such as ports, airports, railways and energy utilities.

There are signs that European leaders are beginning to wake up to some of China’s activities on their continent. The creation of a “16+1 framework” of cooperation between China and Central and Eastern European countries in 2011 has made Berlin and Brussels uneasy about Chinese intentions. Was China trying to divide Europeans by setting up its own club? Eleven countries part of the group are in fact EU members, in addition to others such as Albania, Serbia or Montenegro. After launching its “Belt and Road Initiative,” or BRI, China seems to increasingly tie the two concepts, while the EU and most capitals have been reluctant to offer full support to the BRI.

Secondly, Europe is slowly trying to define a joint position on Chinese FDI, although the European Commission had to compromise on a non-binding arrangement giving guidelines to national governments on FDI in sensitive fields. Following an initiative by Germany, France and Italy in early 2017 asking the Commission to rethink rules on FDI, President Jean-Claude Juncker spoke out in favor of more investment screening measures against Chinese takeovers. Germany is also reviewing whether to increase scrutiny of foreign investments. The EU Commission recently released a 465-page report accusing China of distorting its economy and calling for additional EU measures.

With the UK leaving the EU, opposition to protectionist measures in the EU bloc is also weaker. At the June 2017 European Council, countries such as Greece, Portugal, Poland and Hungary opposed any initiative to scrutinize Chinese investments, which the former Polish prime minister described as “protectionist.” Most of these countries have become strong partners of China in Europe and already received substantial Chinese investments or loans. Still, the debate is ongoing with some reasonable chances of delivering results.

These budding European initiatives should in principle provide space for kickstarting a transatlantic dialogue with the United States on the subject. By offering to reinforce economic ties with allies and partners, the Trump administration is trying to use this opportunity to match its own agenda with Europe’s. In private, European diplomats admit that the United States is also signaling willingness to ease some proposed protectionist measures against Europe in exchange for such tougher European trade action against Beijing.

Although it is not clear at this stage what Europeans will gain from a joint approach, Washington and European capitals do have increased shared interests when it comes to managing China’s rise. Chinese multinationals have expanded worldwide including in the West, while the Chinese market remains relatively closed to foreign companies in a large number of sectors. For example, annual reports from the EU Chamber of Commerce in China and the American Chamber in China have pointed out the lack of reciprocity in China, while Western markets have remained fairly open. This has affected the discussions between both the United States and the EU with China on bilateral investment agreements.

It is logical that China’s emergence as a global power should be taken into account more by the transatlantic partners in their relationship. Intellectual property is one of the top priorities in the NSS, just as it is becoming a concern in some of the main European countries. There is also a case to be made for a discussion on cybersecurity and governance. For all the issues that clearly separate Europeans and Americans (including climate change), there is today clearly a will from Washington to engage in a deeper transatlantic cooperation on the emergence of new economic actors, and China in particular. The question is whether Europeans will bite at this offer.

Philippe Le Corre is a senior fellow with the Harvard Kennedy School’s Mossavar-Rahmani Center on Business and Government as well as a fellow with Harvard’s Belfer Center for Science and International Affairs. He is also a nonresident senior fellow in the Europe and Asia Programs at the Carnegie Endowment for International Peace.

Erik Brattberg is director of the Europe Program and a fellow at the Carnegie Endowment for International Peace in Washington.