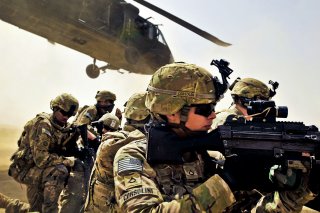 Where, oh where, is the Donald Trump who once proclaimed that the United States should “leave Afghanistan immediately”? Last night it was an alternately vexed and boastful Trump who appeared before troops at Fort Myer, Virginia, declaring he would seek “outright victory” in that desolate and war-torn country, where the Taliban, abetted by their Pakistani benefactors, are seizing more territory by the day. Whether Trump believed his own platitudes may be wondered.

His delivery was stiff and halting. It lacked conviction. He offered a kind of penance for his earlier remarks about Charlottesville by talking about the heterogenous character of the military and the need to unite. At times he bellowed a word or phrase; at others he was uncommonly subdued. Indeed he indicated at the outset that his own instinct all along was “to pullout.” His aim was to explain why he had changed his mind. He had learned new things. Bad hombres could once again take power absent America in Kabul.

At bottom he yielded to his generals who, like Trump, don’t want to be saddled with the blame for defeat.

More troops—he refused to specify the number—are headed for Afghanistan, not, Trump hastened to note, to engage in nation building, but to kill terrorists. After sixteen years in Afghanistan, America has already killed a lot of terrorists, but new ones are doting up to replace the old, much like the opium poppy fields in that country.

Trump wasn’t wrong to note that failure in Afghanistan might well embolden our terrorist enemies. But what constitutes victory? He never said. Rodomontade substituted for strategy, bluster for certitude. At bottom he must know that none is plausible. Afghanistan, it has been said, is the graveyard of empires. The British, the Soviet—and now the American? At a minimum, Afghanistan carries palpable echoes of Vietnam, where Washington was unable to prop up a corrupt regime and found itself succumbing to mission creep and a host of other sins.

For all his talk of America First, Trump has been steadily expanding American commitments abroad, whether in Asia or the Middle East. The military is his preferred instrument of choice. The State Department is in a state of disintegration. Trump’s foreign-policy restraint, you could say, is very restrained. And the notion, as Trump thundered, that America’s NATO allies will rush to help pull our chestnuts out of the fire defies credulity. The last thing Germany or other European countries want is to become further mired in the Afghan imbroglio.

Lurking outside the administration is Trump’s former adviser, Steve Bannon. He and his janissaries are now girding for battle with Trump. Breitbart News has already noted that Trump is not the first president to avow that he would not provide the Afghans with a “blank check.” So did Barack Obama.

What Trump is offering is Obama-lite. Or, if you prefer, a new version of Joe Biden’s counterterrorism plan. The truth is that if America really wanted to create some semblance of order, it would take decades and even then it probably would fail. There is, however, no real political constituency for reconstituting Afghanistan. The more likely prospect is that Washington will remain mired for years in Afghanistan, engaged in a protracted holding action, though Trump did lay the groundwork with his speech to blame the generals if he does decide to bail out in a year or two.

A more unvarnished Trump seems likely to appear in Phoenix on Tuesday night. But no matter what he says, no matter how much he complains about his predicament, it’s rapidly becoming clear that he’s not leaving Afghanistan any time soon. “In the end,” he said, “we will win.” That prediction deserves something Trump knows well: a Bronx cheer.