Trump's Opening to North Korea Is No Surprise 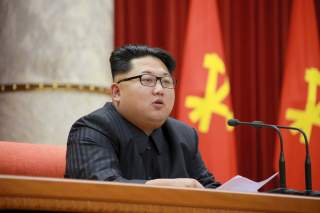 In January 2017, Politico magazine held a symposium asking what Donald Trump would face in the coming year. Yours truly predicted that Trump would “throw the foreign policy equivalent of a long bomb—visit North Korea.” I was only a few months off. Trump, to the shock and awe of much of the Washington foreign-policy elite, is now intent on meeting with Kim Jong-un, even if it isn’t in North Korea proper.

Imagine the reaction if it came to light that Donald Trump had spurned an offer from North Korea that was conveyed to him by top South Korean officials to meet and discuss peace in our time. Imagine further if he insisted that he had to break the back of the regime, and remained intent on going to war with Pyongyang. A chorus of indignation would have erupted about Trump the warmonger, the crazed inhabitant of the White House, and so on.

Now that Trump has accepted the offer, a lot of eye rolling is taking place among liberals. Liberals, having denounced Trump for excessive bellicosity, are now complaining that he’s too receptive to the regime’s blandishments. So are they guilty of hypocrisy? Actually, only a little bit. It’s possible to be in favor of negotiations without espousing a summit meeting with the dictator of Pyongyang.

Even more consistent, however, are the hard-liners, like the military historian Max Boot, who worry that Trump will attempt to play kissy-face with the pariah of Pyongyang. Boot complains in the Washington Post, “Moon and Kim have, for their own reasons, snookered the credulous American president into a high-profile summit that is likely to end in disaster one way or another. Kim is evidently willing to suspend his nuclear and missile tests while the talks are underway, but this is a minimal concession that can easily be reversed. He is most likely willing to do even that much only to buy time for his engineers to finish developing a nuclear warhead that can fit on an intercontinental ballistic missile capable of reaching the United States.”

Maybe. But meeting with Kim doesn’t have to constitute a new Munich. Is Trump really ready to defy the American military leadership and bargain away our military presence in South Korea for a paper promise by the North to denuclearize? I very much doubt that this would earn the approbation of Defense Secretary James Mattis.

What’s more, if the summit actually takes place—always a big if when dealing with leaders as mercurial as Trump and Kim—and fails, then Trump will have demonstrated to South Korea and Japan that he has done as much as humanly possible to avoid a war. Right now, he simply doesn’t have the mandate for a conflict. In this regard, Munich offers a salutary lesson, albeit not one often drawn by neoconservatives. The cold, hard truth is that Neville Chamberlain did not have the backing of the British public in 1938 for war.

Still, the imponderable here has to be Trump. Trump likes to talk tough. Kim acts it. He’s liquidated his own brother. He’s purged a good part of the North Korean ruling elite. My guess is that he and Trump will hit it off, which could make for a highly unpredictable negotiation. Let’s face it: Trump likes strongmen. He likes Putin, Erdoğan, Duterte and Xi. It’s the namby-pamby Western leaders, especially the women like Merkel and May, whom he views with disdain. From this perspective, Kim is the big kahuna, the ultimate catch. A good relationship with him might even pave the road to Stockholm, where Trump could receive the Nobel Peace Prize.

For now, however, Trump will focus on the domestic political benefits. Foreign-policy elites can wring their hands all they want, but it is his ratings that Trump cares about. If Trump really wants to upset the foreign-policy establishment, he may even conduct a poll on Twitter asking his followers if he should really make any concessions to the North or not before he heads off to see Kim. The North Korea maneuver allows him to push aside, or at least distract from, the mounting pile of bad news that arrives almost daily, whether it is Stormy Daniels or the Mueller investigation.

Trump, who is proudly conducting his administration like a reality show, knows that he needs a new storyline. If you look at North Korea as tantamount to a wrestling match, it has all the ingredients Trump knows and loves: a dastardly villain, a threatened damsel in distress in the form of South Korea, and a white knight who sweeps in to save the day. A branding genius and born entertainer, Trump, as far as possible, will seek to build up the suspense from now on, every day and in every way, until the grand encounter takes place.