Trump's Opponents Should Hope He Sticks Around 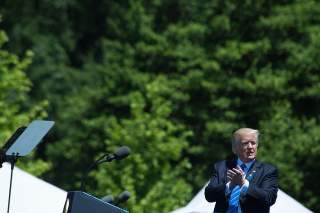 Unforeseen consequences are a constant in politics. Unfortunately, so is the pack mentality affecting most politicians and many of the journalists covering them. Even when coming events cast their shadow, Washington’s thundering herd of pundits and politicos is usually too busy stampeding to notice. The current farrago of rumors, anonymous denunciations and cries of “fire” in the crowded political theater offer a striking example. Everyone is talking, but nobody seems to really know what they’re talking about. One of the oddest things about our very odd forty-fifth president is the way Donald Trump, whom his critics are constantly accusing of lack of judgment, callous disregard for the facts, reckless irresponsibility and mental instability, induces many of the same symptoms in his attackers. Someone recently referred to it as TDS—Trump Derangement Syndrome.

TDS sufferers are constantly shouting that the Trump presidency is in crisis, Washington is paralyzed, the nation is in peril and we are witnessing the second coming of Watergate. So say the New York Times, the Washington Post and “mainstream” broadcast media, for all of whom the wish is father to the thought. But, despite its name, the Watergate analogy doesn’t hold water. The Watergate scandal began with a crime—admittedly a small-time break-in, but a crime nonetheless—which led to a cover-up involving criminal culpability. What we are dealing with as I write this, may be scandalous but it isn’t criminal: no crime to conceal, ergo no criminal cover-up.

Donald Trump—bumptious, childish, self-centered and incapable of reining in his loose tongue and twitchy Twitter finger—will remain an easy figure for ridicule on Saturday Night Live for as long as he is president. But bumptiousness, childishness and a big mouth are not impeachable offenses. And I doubt if even his harshest critics expect Donald Trump to resign on his own initiative out of delicate feelings. The man is equal parts—and not necessarily the best parts—of Teddy Roosevelt, P. T. Barnum and Evel Knievel. He’s not easily intimidated, and he’s certainly not going anywhere quietly. And, so far at least, his clumsiness and impulsiveness in dealing with this crimeless scandal have been equaled if not surpassed by his attackers.

One can hardly blame them. The mainstream media went into the 2016 presidential cycle convinced that Hillary Clinton was destined to be the next president. They thought Donald Trump would be her weakest GOP opponent and concentrated on negative coverage of more likely contenders while treating Trump with kid gloves until the Republican nomination was within his grasp. The rest, they thought, would be a cakewalk. But they overestimated Hillary as much as they underestimated The Donald, and they completely misread the public mood and the electoral map. They’re doing much the same thing today. Still, let’s suppose, just for a moment, that the Washington Post, the New York Times, CNN, Senator Schumer and Representative Pelosi get their wish. What is the likeliest scenario that would follow if Donald Trump was driven from office?

While the word “Watergate” is on everyone’s lips, it really doesn’t fit the case. Richard Nixon faced solid, rabidly partisan Democratic majorities in the House and Senate throughout his presidency. He also became enmeshed in a criminal cover-up. The political balance of power today couldn’t be more different; the GOP controls both houses of Congress, and there is no evidence of a cover-up because there is no evidence of a crime. Equally important is the new media dynamic. There were no alternative media to speak of during the Watergate era. The public was entirely dependent on the three major networks and a print news establishment, for which the Times and the Post were the political role models. No such monopoly exists today. If the Watergate comparison doesn’t stand up, what does?

Try this one on for size. It involved a careless, over-confident and scandal-plagued Republican president whose reputation was severely shaken and who was succeeded by a calm, composed former governor in his fifties whom the muckraking national media had largely ignored and drastically underestimated. The president, Warren Harding, had been elected on a wave of populist, nativist sentiment in reaction to Woodrow Wilson’s collapsed vision of a progressive globalism as embodied by the League of Nations. Harding had no personal connection to Teapot Dome and a handful of lesser scandals that broke during his presidency, and no one called for his impeachment. But a shadow of scandal persisted and literally drove him to his grave. He died suddenly on March 21, 1923, while on a trip to the West Coast.

His successor, Vice President Calvin Coolidge, had been a law-and-order governor in Massachusetts. He was a calm, almost colorless man, but better educated and much more articulate and knowledgeable than the easygoing Harding had been. Coolidge worked well with the Republican congressional leadership and ran a clean, conservative and highly successful administration that the public approved of and supported. “Silent Cal” was a man of few words, but he always chose them wisely. He was overwhelmingly elected to a full term as president in his own right in 1924, and would almost certainly have been easily reelected to a second full term in 1928 if he had not announced his intention to retire after the tragic death of his young son. The GOP swept to victory that year anyway, thanks largely to the popularity of the Coolidge legacy.

Vice President Pence is also a grayish former governor with a strong record, and a man of few but well-chosen words. Anyone who watched him wipe up the floor with Sen. Tim Kaine, his Democratic counterpart in the 2016 vice presidential debate, saw a master communicator at work. He’s comfortable with himself and with the issues, he inspires a quiet confidence in others, and he would have the united backing of his party and many independent voters looking for a calm, grown-up, no-drama approach to making the political system work for the national interest and for ordinary Americans.

The more I look at Vice President Mike Pence, the more convinced I am that the Trump haters in the media and in the Democratic Party should be careful what they wish for.