Trump's Partisan Problems Will Save His Presidency 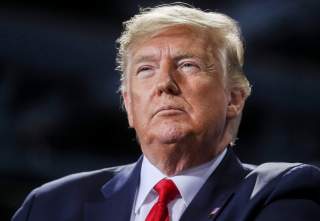 There is a certain dark humor in impeaching President Donald Trump over delaying the transmission of aid to Ukraine pending an investigation that could influence the 2020 presidential election and then delaying the transmission of the articles of impeachment pending a trial better suited to influence the 2020 presidential election. At least the Ukranian government desired the aid.

Unless House Speaker Nancy Pelosi merely wants to mollify the most rabidly pro-impeachment parts of the Democratic base while blaming Senate Republicans for the subsequent inaction, there is nothing in the Laurence Tribe op-ed on which her current strategy appears to be based that approaches the logic of Senate Majority Leader Mitch McConnell’s dry rejoinder: "I admit, I’m not sure what leverage there is in refraining from sending us something we do not want."

While Democrats insist that these latest machinations are necessary to avoid a “Potemkin impeachment trial,” implicit in some of their arguments is a concession that the Trump-Ukraine case isn’t the slam dunk they imagine. A delay would let them wait for developments in the Southern District of New York case against Trump, perhaps more stories about Russian money flowing to Ukraine player Lev Parnas’ wife, and for various other shoes to potentially drop.

Except this is precisely the strategy that failed in the Trump-Russia investigation. Democrats could have argued that Trump’s behavior in the face of Russian efforts to influence the 2016 presidential elections—he was silent or even publicly skeptical about Moscow meddling while clearly hopeful that Wikileaks’ revelations would prove damaging to Hillary Clinton—and federal investigations thereof were not what Americans should want from a president. Some Democrats have made that argument and, when push comes to shove, still do.

Tantalized by talk of Trump as a Russian asset or rumors immortalized in Christopher Steele’s (heavily debunked) dossier, Democrats and Never Trumpers fervently hoped special counsel Robert Mueller would uncover something much worse—an active collaboration between the Trump campaign and Russia, possibly one that rose to the level of criminal or even treasonous. “In fact, I think there’s a lot of shoes to drop from this centipede,” Sen. John McCain, a hawkish Trump-skeptical Republican, quipped at the time. But Mueller did not deliver anything substantially worse than the Trump unseemliness most people largely already knew about it (albeit with more color). Mueller’s failure to indict anyone for crimes related to fixing the 2016 election quelled various attempts to pivot back to “Russia, are you listening?” as collusion in plain sight fizzled.

The more impeachment looks like an exercise in partisan futility, the less likely it is to command the public’s attention and garner the support of independents. Polling on impeachment and removal does vary widely, with Economist/YouGov showing 50 percent in favor and USA Today/Suffolk finding 50 percent against. But the overall trendline is less favorable than at the height of Democratic House Intelligence Committee Chairman Adam Schiff’s closed-door hearings and the RealClearPolitics polling average now has the electorate narrowly opposed to impeachment. There is some evidence that popular support is even lower in the states that will decide the 2020 election.

House Republicans rapidly moved articles of impeachment against President Bill Clinton in the face of far greater public opposition. Once the articles were sent to the Senate and the House impeachment managers were appointed, the fate of Clinton’s presidency may have rested in the hands of two Democratic senators: Joe Lieberman of Connecticut and Robert Byrd of West Virginia. Each man was a self-styled defender of something bigger than the politics of impeachment—Lieberman cared about public morality and Byrd prioritized Senate prerogatives—and has been critical of Clinton’s conduct.

Clinton might have been safe either way, given public opinion, but once Lieberman and Byrd both came out against his removal the trial’s outcome was a foregone conclusion. The only question was whether Republicans could succeed in enlarging the asterisk next to Clinton’s name by securing majority votes for the articles of impeachment. (They failed—the best the Senate GOP could manage was a 50-50 deadlock on obstruction of justice.)

Susan Collins and Mitt Romney may find themselves playing the roles of Lieberman and Byrd. Collins is a moderate senator from bluish Maine who is up for reelection next year. She spent much of her political capital supporting Brett Kavanaugh, Trump’s nominee for the Supreme Court, in a contentious confirmation vote. Romney is a political nomad who finally settled on a Senate seat from Utah. He is the politically safest Never Trump Republican.

Even if both Collins and Romney chose to go against the president, Trump’s removal from office by a 53-47 Republican Senate in an election year remains a long shot. But Romney and Collins have the potential to do more to influence the rules of a Senate trial than anything Pelosi and House Democrats can do. And fracturing McConnell’s caucus, however so slightly, could at the very least grow the asterisk next to Trump’s name by securing majority support for an article of impeachment or two.

Anything that cannot swing at least Collins or Romney is nothing but political theater.