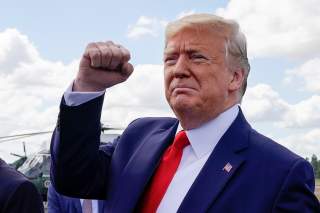 It’s easy to choke on Defense Secretary Mark Esper’s claim that the Pentagon is “working with our partners to address this unprecedented attack and defend the international rules-based order that is being undermined by Iran." Defending the rules-based order? Hasn’t the Trump administration been doing exactly the opposite?

It’s also instructive to remember the company that Trump likes to keep. He has often seemed hostile to leaders of other liberal democratic countries, which comprise the most steadfast promoters of international rules. By comparison, Trump is chummy with dictators like Russian president Vladimir Putin whose adventures in Crimea and Ukraine and interference in western elections have seriously challenged the idea of an international order comprised of commonly accepted rules. An inordinate amount of the forty-fifth president’s political capital has been spent snuggling up to Kim Jong-un whose regime is the antithesis of the liberal order. And Trump’s uncritical support of Saudi Arabia’s Mohammed Bin Salman, no friend of international restraint, has helped fuel the current chapter in the crisis between Riyadh and Tehran.

But Trump’s hesitation about using force against Iran, currently on show but also revealed in earlier moments, translates into support for one of most important rules in the international order. Enshrined in the charter of one of Trump’s least favorite institutions, this is the rule stipulates that states may not resort to war against each other to resolve their differences. Few other rules are more important, except perhaps for the one saying that nation-states should remain the dominant actors in the international system: something that Trump has absolutely no problem with either.

Over the first thirty months of his otherwise tumultuous presidency, Trump has been reluctant to deploy in battle the vast military which is a frequent subject of his boasting. One notable exception occurred very early: Trump’s ordering of cruise missile attacks on Syrian targets in April 2017 in response to the use of chemical weapons. This was not only a limited and carefully calculated use of force, but it also stands out as a remarkably rare event for the Trump administration.

Trump’s military style has substituted coercive threats for kinetic attacks. Before growing to love Kim he threatened North Korea with the use of force as never seen before. He allowed John Bolton to get away with saying that all options were on the table in dealing with Venezuela. Trump has repeatedly threatened Iran, but those threats have not turned violent. He has flaunted America’s maritime prowess in Asia as a way of impressing Beijing, but seems no more willing than Barack Obama was to use actual force to push China back in the South China Sea.

In fact, Trump’s approach reflects a trend that became manifest in Obama’s 2008 election in 2008. Americans do not want to see their country committed to new overseas wars. After two wars in Iraq, the unending war in Afghanistan, the use of air power against Libya and Serbia, Trump’s presidency is friendlier to the “thou must avoid war” commandment than several of his more rational and reasonable predecessors. By some accounts, that list might even include Obama.

There are two pathways from here and both pose problems for America’s reputation. The first is that Trump’s war avoidance continues. That’s good for one part of the rules-based order but it makes it much easier for adversaries to ride out his threats of military action, knowing that these are ubiquitous but empty. The second is that with Iran or somewhere else, Trump finally decides that his least-worse course of action in an escalating crisis is to lead the United States into a serious violent conflict. This would mean breaking the one big rule of the international order that Trump has largely been observing. But until—and unless—that happens his presidency has not been a disaster for the rules-based order that many of us have been making it out to be.

Robert Ayson is a professor of strategic studies at Victoria University of Wellington, New Zealand.