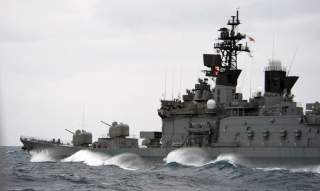 In most respects, the White House meeting between President Trump and Prime Minister Shinzo Abe was fairly routine. The two leaders lauded each other and the alliance that binds their countries. They issued a joint statement pledging joint action in security, on economics and other issues. And then, after their Oval Office talks, the American president and the Japanese prime minister jetted off for a weekend of golf in Florida.

All this is typical fare by the standards of summit diplomacy, and that in itself was remarkable given the uncertainty around Washington’s approach to Asia. The president made no reference to his campaign-era portrayal of Japan as a free-riding trade competitor—or to his previous demands that the alliance change shape dramatically. Given Japan’s role as the pillar of American strategy in northeast Asia, the silence (until North Korea’s unwelcome disruption) was happily deafening.

This first visit from an Asian ally may augur something more unexpected still: the mainstreaming of Trump’s approach to American relations with the Asia-Pacific.

In their joint statement and individual remarks, Trump and Abe hit many of the traditional themes that have animated bilateral ties for decades. They emphasized the “unwavering” U.S. commitment “to defend Japan through the full range of U.S. military capabilities, both nuclear and conventional.” Trump offered nary a word about tying America’s defense guarantee to increased host-nation support, and did not raise the possibility of a Japanese nuclear arsenal substituting for America’s extended deterrent.

The president made clear that America’s defense commitment includes the Chinese-contested Senkaku Islands. Here the president’s declaration will help clarify U.S. resolve, and it reaffirms the statements made in Tokyo by Secretary of Defense Jim Mattis. The leaders made a nod to trilateral cooperation with South Korea, echoing Mattis’s praise of American ties with Seoul. And, in a late-night press appearance following North Korea’s missile launch, Trump emphasized that the United States stands behind Japan “100 percent.”

Trump and Abe pledged to deepen their countries’ trade and investment, and established bilateral talks aimed at examining possibilities beyond the Trans-Pacific Partnership. Trump, who on the campaign trail and afterward made repeated references to Japan’s “unfair” trading practices and alleged currency manipulation, offered not a single criticism. “The vibrant exchange between us,” he said instead, “is a true blessing.” Time will tell whether the positive talk gives way to harder positioning as other officials take up the trade discussions.

Even the golf, despite the venue, was quite unexceptional. President George W. Bush set the standard for personal diplomacy when he accompanied Junichiro Koizumi, then prime minister, to Elvis Presley’s home at Graceland. A weekend of sport at Mar-a-Lago can hardly compete with the sight of Koizumi, in gold-rimmed plastic sunglasses, crooning “Love Me Tender” for Priscilla, Lisa Marie and George W. The new administration and its Japanese counterparts should get credit for recognizing the importance of building personal relationships between the two leaders and their teams.

The Abe summit isn’t Trump’s only effort to sand off the more controversial edges of his Asia policy. Just before the prime minister’s visit, Trump told Chinese president Xi Jinping that the United States will adhere to the One China policy, squaring his administration’s approach with that of its predecessors. Secretary of State Rex Tillerson has clarified that, contrary to the impression left during his confirmation hearing, the United States will not blockade Chinese-built islands in the South China Sea but seek other ways to oppose Beijing’s designs. And Defense Secretary Mattis continues to emphasize the importance of America’s traditional alliances, including with South Korea and Australia.

This clearing of rhetorical underbrush is welcome and timely. The objectives and main instruments of U.S. policy in Asia are not fundamentally flawed; rather, it is the execution of that policy that requires invigoration.

There is little time to waste. In recent days, a Chinese warplane buzzed a U.S. Navy aircraft over the South China Sea in an incident reminiscent of the EP-3 crisis that plagued the early days of the George W. Bush presidency. North Korea continues to threaten the launch of a ballistic missile that can hit the continental United States. Doubts about American economic leadership are high following the TPP’s demise in Washington. And broader questions about the overall direction of the United States, and how the new administration will define its interests, have raised fundamental questions throughout the region.

All this suggests a near-term Asia agenda for the new administration. More assertive and frequent overflights and freedom-of-navigation exercises in the South China Sea would demonstrate American support for regional rules. Starting bilateral free-trade agreement talks with Japan would represent a next-best alternative to the TPP. Fulfilling the U.S. commitment on Australian refugees could help repair ties after Trump’s heated phone call with Prime Minister Malcolm Turnbull. Accelerating the deployment of theater missile defenses in South Korea would help Seoul defend against threats from the north. Expressing clear support for the regional rules-based order and a commitment to help allies resist Chinese coercion would help reassure partners, and boosting defense spending would give it tangible meaning.

There will remain open questions about the nature of American leadership. Partners in Asia are looking for signs that campaign-era rhetoric will subside, and that a policy protective of their interests and values will emerge. Working with them is the best way to further our own interests in the region. To this end, more visits like Prime Minister Abe’s would mark a step in the right direction.

Richard Fontaine is president of the Center for a New American Security in Washington, DC.