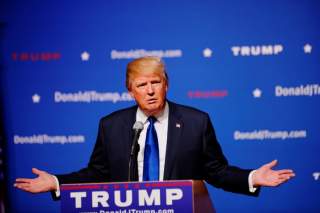 Donald Trump’s foreign-policy speech at Youngstown, Ohio, on Monday calls to mind the first issue of William Buckley’s National Review, in which the young editor audaciously declared his magazine "stands athwart history, yelling Stop." The country was moving in a decidedly liberal direction at the time, but nine years later the Republicans nominated the National Review darling, Barry Goldwater. Sixteen years after that, the country elected Ronald Reagan, about as ideal a specimen of conservatism as Buckley could have imagined when he positioned himself athwart history.

What brings to mind the Buckley analogy is the extent to which Trump has set himself against the national zeitgeist at a time when few have felt any serious opposition could possibly emerge to challenge that prevailing national outlook.

Before this campaign began, the Republican Party’s foreign policy was considered the domain of its neoconservative forces, bent on maintaining the bellicosity of George W. Bush, John McCain and Mitt Romney toward various bad guys in the Middle East, Vladimir Putin’s Russia, a rising China, the specter of communist Cuba, and any tinhorn dictator who got in the way of American hegemony. Meanwhile, the Democratic foreign policy wasn’t much different, though humanitarian impulses undergirded the interventionist vision of the left.

That was the zeitgeist of American foreign policy a year and a half ago, and there was no reason to believe that anyone could emerge to take it on. Aside from Trump—whose views were obscure and whose prospects seemed dimmer than dim—the only politician who stepped forward on the Republican side to assume the realist mantle was Kentucky’s Senator Rand Paul. But he never projected the commanding presence needed to emerge from the pack. As for the Democrats, there was Bernie Sanders, but he wasn’t even a Democrat, strictly speaking, and nobody took him seriously.

And yet now we have this stumble-prone businessman of boorish demeanor and brief attention span who has become, at the least, the Goldwater of his time. He has managed it because the zeitgeist is generating a great deal of angst around the country and Trump has proved better than anyone else at identifying the substance of that angst.

That was seen in the Youngstown speech. "Our current strategy of nation-building and regime change is a proven failure," declared Trump. He added for emphasis, "If I become President the era of nation-building will be ended." That fell with equal force upon the foreign-policy leaders of both parties—McCain, Lindsey Graham, William Kristol, and Marco Rubio on the GOP side; Hillary Clinton, Samantha Power, Victoria Nuland, and John Kerry among Democrats.

By way of elaboration, Trump added, "President Obama and Hillary Clinton should never have attempted to build a democracy in Libya, to push for immediate regime change in Syria or to support the overthrow of Mubarak in Egypt." Just a couple years ago, these actions emanated from what was essentially the country’s foreign-policy default position—namely, humanitarian interventionism, which usually manifested itself in regime change and nation building. True, after Obama revealed plans in 2013 to launch strikes against the Assad regime, he ended up backing off abruptly when polls showed that up to 54 percent of Americans opposed the idea. Nevertheless, he took a lot of heat from both parties for ignoring his own "red line" on the matter. He positioned himself outside the zeitgeist and paid the price.

But Trump doesn’t even pay lip service to it, as reflected also in his refusal to assume a hostile relationship between the United States and Russia. "I also believe that we could find common ground with Russia in the fight against ISIS. They too have much at stake in the outcome in Syria, and have had their own battles with Islamic terrorism."

This is remarkable as a statement athwart the prevailing foreign-policy outlook. Both parties have embraced the view that we must fight ISIS in Syria as it attempts to bring down the regime of Bashar Al Assad. But, in this view, we also must fight Assad because he is a bad guy and gets in the way of any nation-building project there. Hence, the conventional thinking can be characterized as the enemy of my enemy is my enemy.

This is ridiculous, of course, and Trump rejects it. He will work with Russia because Russia is fighting ISIS (along with other, more moderate anti-Assad forces) in its effort to prop up Assad, at least for a time. But, unlike so many so-called foreign-policy experts and such high-level officials as Secretary of State Kerry, Trump eschews the muddled mission of America in Syria. He opts for a more simplified and tightly defined policy.

"Our new approach," he said, "…must be to halt the spread of Radical Islam. All actions should be oriented around this goal, and any country which shares this goal will be our ally."

Trump commingled the ISIS threat with his call for greater immigration restrictions in ways that could prove resonant among some Americans. Rather than maligning Mexican immigrants, as he did in announcing his candidacy in June 2015, he now talks of the imperatives of "screening" to ensure that dangerous Islamist radicals aren’t allowed into the country. "The size of current immigration flows are simply too large to perform adequate screening," he said. "If we don’t control the numbers, we can’t perform adequate screening."

By contrast, Hillary Clinton "wants to be America’s Angela Merkel," said Trump, invoking the civic problems besetting Germany as a result of Merkel’s decision to let into her country nearly a million Middle Eastern refugees within about a year.

Trump renewed his attack on "political correctness," which he said was hampering the country’s ability to see "warning signs" of potential violence from radical Islamists. "These warning signs were ignored," he said, "because political correctness has replaced common sense in our society." And, he added with a note of defiance, "We will also keep open Guantanamo Bay."

Though notable as an anti-zeitgeist brief, the Trump speech also contained some items that raise questions. He said he would thwart ISIS from using the Internet as a recruiting tool or for other threatening purposes, declaring that "we must shut down their access to this form of communication, and we must do so immediately." How this could be done remained obscure, and in fact it’s difficult to see how it could be feasible.

He joined his party’s neoconservative forces in railing against Obama’s nuclear deal with Iran and said the president’s policies had placed that nation "in a dominant position of regional power and, in fact, aspiring to be a dominant world power." This is a clear exaggeration, for one thing, and probably no one contributed more to Iran’s enhanced regional status than Obama’s predecessor, George W. Bush, who upended the balance of power between Iraq and Iran when he invaded Iraq.

Still, seldom do we get from conventional politicians the kind of zeitgeist assault that Trump unleashed on Monday. Of course, Trump is no conventional politician. He may be severely challenged in his drive to reach the White House and to deflect the direction of the country. But his ability to deflect the American foreign-policy debate has become clear over the past year—and was evident once again in his Youngstown speech.