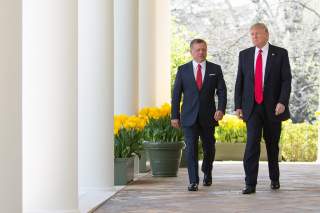 Experts have long predicted the imminent fall of Jordan’s Hashemite monarchy. Yet the kingdom has outlasted its historically stronger rivals thanks to a finely tuned ability to flexibly balance competing, often hostile forces both in the region and within its borders. A strategic alliance with the United States of America is key to that balance, suggesting that the rise of the unconventional Trump administration—proudly disruptive, unpredictable and with a penchant for questioning long-standing U.S. alliances—is bound to shake up security calculations in Amman.

Fortunately for Jordan, President Donald Trump likes King Abdullah II, and in this administration that counts for a lot. Abdullah was the first Arab leader with whom Trump met and the first world leader to enjoy two audiences with U.S. president. For a president who prizes advice from generals, it is telling that Trump publicly praised Abdullah as a “great warrior.” On April 26, a U.S. delegation traveled to Amman to kick off the thirty-ninth annual U.S.-Jordan Joint Military Commission.

While the U.S. commitment to Jordan’s security remains firm, Amman must deal with the same foreign-policy whiplash experienced by the rest of the world. Nowhere is this more apparent than Syria, where Jordan has long walked a tightrope between competing U.S. and Russian interests.

Abdullah welcomed the Trump administration’s early rhetoric about U.S. military cooperation with Russia. During the Obama administration, Amman was forced to balance participation in the U.S.-led anti-Islamic State coalition with the need to hedge against Moscow’s military momentum. Trump’s initial deference to Russia, however, promised to minimize the need for military and political acrobatics between the superpowers while smoothing the way for Amman to bandwagon with the winning Russian-Syrian alliance in the hope of pacifying Jordan’s northern border.

Jordan’s posture toward both Moscow and Damascus thus warmed considerably after Trump was elected. In January, Abdullah visited Moscow and spoke of a shared Russian-Jordanian vision for stability in the region. One month earlier, Jordan’s military chief, Lt. Gen. Mahmoud Freihat, emphasized in a BBC interview that Jordan never worked against Damascus, confirmed the existence of a Jordanian-Syrian military liaison relationship and expressed optimism that the Syrian regime would soon retake the border. On February 4, Freihat ordered a drone strike on Islamic State targets in southern Syria, presumably communicated in advance to both Russia and Syria given the optimistic rhetoric of the time.

The U.S. military’s April 6 strike against a Syrian air base and the renewed U.S.-Russian hostility that followed changed these dynamics. Russian anger at Washington, DC led Moscow to briefly suspend the deconfliction hotline between the U.S. military and Russian military and vow to improve Syrian air defenses, increasing the risk for coalition warplanes fighting the Islamic State. Assad, for his part, blasted Jordan in the Russian media and accused Amman of planning to deploy inside his country—a charge Jordan flatly denies. Regardless of what Abdullah knew of the U.S. strike in advance, the optics of his joint press conference with Trump one day prior surely complicates his designs in Syria.

Meanwhile, no one seems to know exactly where the administration stands on Syria, or under what conditions the U.S. military might strike again? Less than one month since the strike, Trump and Russian president Vladimir Putin spoke in a May 2 phone call of coordinating “safe, or de-escalation zones,” and the State Department announced more senior representation at the May 3–4 Russian-led ceasefire talks in Astana, Kazakhstan. Jordan’s public denial of Syria’s accusation and improving, albeit tentatively, U.S.-Russian relations suggest that Amman’s best bet will be to resume wait-and-see mode until the superpowers figure out where they stand.

No less, on the domestic front, Abdullah must balance his religious authority as a direct descendant of the Prophet Muhammad and leading proponent of moderate Islam against a homegrown Sunni-extremism challenge. Here the Trump administration’s own domestically oriented populist rhetoric and policies risk emboldening the same foreign radicals it seeks to counter.

Former FBI counterterrorism agent Ali Soufan wrote in the Wall Street Journal recently that defeating Sunni extremism requires “counter[ing] the false jihadist narrative that the West wants a ‘war against Islam.’” Yet Trump era policies like the attempted travel ban directed against Muslim-majority countries, the barring of Syrian refugees and a reduction in civilian oversight of military operations that has correlated with a rise in reports of civilian casualties in the Muslim world all threaten to fuel the jihadist narrative.

Jordan’s struggling economy, to be sure, is a key factor of internal radicalization. Abdullah told the Washington Post on April 6, “There is a lot of unemployment, and that could lead to radicalization. That is what has kept me up for the past five or six years: the economy.” The king may be disappointed then that the Trump administration’s proposed America First budget for fiscal year 2018 seeks to cut State Department funding for diplomacy and foreign aid by 28 percent.

Jordan receives generous State Department assistance for both military and nonmilitary purposes, not less than $1.28 billion in the 2017 fiscal year. Any significant decrease in Jordan’s $475 million in nonmilitary economic support funds would inevitably impact the unemployed youth who are most susceptible to radicalization. That is exactly why more than 120 retired U.S. generals and admirals reacted so strongly to the administration’s budget priorities in an open letter to the White House, explaining, “The military . . . needs strong civilian partners in the battle against the drivers of extremism—lack of opportunity, insecurity, injustice, and hopelessness.”

Finally, Jordan’s leaders have a national-security interest in U.S. policy toward the Israeli-Palestinian conflict. Abdullah serves as the official custodian over Jerusalem’s Muslim holy sites, and Palestinian refugees and their descendants make up a majority of Jordan’s population. A credible process in pursuit of peace would provide Abdullah with invaluable political cover at home.

On this point the Trump administration earns tentatively positive marks. Early rhetoric about moving the U.S. embassy to Jerusalem and indications of support for settlement activity originally raised alarms in Amman, but subsequent administration backtracking—at least partly at the instigation of Abdullah, some say—has calmed tensions. Palestinian president Mahmoud Abbas’s successful May 3 visit to the White House, during which Trump affirmed his commitment to “get this done,” is a further welcome sign in Amman.

In the meantime, Jordanians will be closely watching President Trump’s recently announced visit to Israel in late May. The trip would occur on the eve of the 50th anniversary of 1967 Arab-Israeli War, when Israel captured the West Bank and East Jerusalem from Jordan. One Republican lawmaker predicted that Trump will announce the embassy move during this visit.

The United States has a vital interest in the security of longtime ally Jordan. Amman is a critical member of the coalition to defeat Islamic State, a reliable counterterrorism partner more broadly, a vocal proponent of moderate Islam and an advocate of Arab-Israeli peace. Trump is right to explicitly reaffirm U.S. support for the kingdom so early in his tenure. This message and his apparent stock in Abdullah’s advice are invaluable to Amman.

Yet the Hashemite monarchy will, as it has always done, balance its relationship with the West against radical currents closer to home. On this matter, the Trump administration’s populist rhetoric and coveted disruptive unpredictability will require Amman’s constant and careful attention. Trump, naturally, has his own set of priorities, but when it comes to the Middle East—as elsewhere—he can best put America first by ensuring Washington’s first lines of defense overseas.

David Wallsh served as a Middle East policy advisor in the Office of the Secretary of Defense for Policy from 2013–16. He is currently a Ph.D. Candidate at the Fletcher School of Law and Diplomacy and a Truman National Security Fellow. The views expressed in this article are those of the author and do not reflect the official position or position of the Department of Defense or U.S. Government.