Trump's Republican Base Is Wary of India 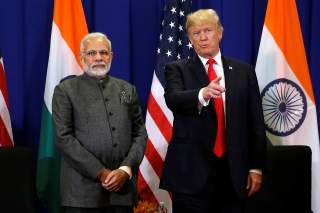 The U.S. decision to remove India from the Generalized System of Preferences program last month, citing its lack of “equitable and reasonable” market access, was the toughest action of the Trump presidency against the country. It may also be a sign that a decade of growing U.S.-India partnership is entering a new normal with lingering economic and trade disputes taking center stage. Stronger measures against India by Congress and the president are indicative of a broader anxiety in the Republican Party that views India as a source of domestic U.S. troubles.

The Trump administration is not the first to use the GSP program to pressure New Delhi. Given that India is the top beneficiary of GSP benefits, Washington has seen the program as a source of leverage to address unfavorable Indian trade practices. The latest U.S. decision will affect $5.6 billion of Indian exports— close to 12 percent of U.S. imports from India.

In 1992, during another period of populist upheaval in the Republican Party, the Bush administration launched a Special 301 investigation into India’s intellectual property regime. The investigation led Washington to limit India’s benefits under the GSP for chemicals and pharmaceuticals. Washington hoped that the loss of GSP benefits would convince India to introduce legislation to extend patents on these products. India ultimately did so shortly thereafter as part of the Uruguay Round of the General Agreement on Tariffs and Trade that concluded in 1994. After a ten-year “developing country” transition period, India enacted the patent legislation into law and rejoined the GSP in 2004.

The agreement did not remove intellectual property as an irritant in U.S.-India relations altogether, but it did give Washington and New Delhi enough reprieve from domestic political pressures to pursue a broader rapprochement. The volume of chemical exports affected by the GSP exclusion to the United States were hardly enough to distract from security issues such as India’s nuclear weapons program, its conflict with Pakistan, and cooperation on counterterrorism, where U.S. and Indian policy were converging.

The equation has changed since 2005 amid India’s rise as a global competitor in these sectors. Driven by the fact that Indian operation, production, and labor costs can run as much as 70 percent lower than developed countries, major generic drug manufacturers like Lupin, Mylan, and Sun Pharmaceuticals have become global market leaders through their presence in India. In 2018, India accounted for close to 40 percent of all FDA-approved generics, and stood as the largest generic drug exporter in the world. The United States is India’s most important trade partner on generics, importing a quarter of Indian pharmaceutical exports.

The growth of Indian industry has occurred against the backdrop of a paradigm shift in U.S.-India relations. As a bipartisan, pro-India consensus has gradually jelled in the United States on security and defense issues, trends in U.S. domestic politics have made U.S.-India trade disputes more urgent and contentious.

Concerns in the United States about the quality of generic drugs have shined a spotlight on anticompetitive practices in India. FDA officials have increasingly drawn attention to data integrity issues, poor laboratory practices, and price fixing at Indian pharmaceutical manufacturers, raising questions about the extent to which they are testing for quality controls. FDA accusations have been amplified in the press through incidents tracing patient complications in the United States to generics made in Indian plants.

While gradually adopting global standards on intellectual property protections, Indian pharmaceutical firms continue to pursue a different strategy than their American counterparts. More so than U.S. industry, which invests heavily in research and development to invent new drugs, Indians firms are focused on expanding their share of the generic market. This dynamic creates an incentive for generic drug manufacturers to challenge and invalidate the patents of U.S. pharmaceutical companies in an attempt to capture their intellectual property and win the race for early market access.

Although successive U.S. administrations since the George H. W. Bush administration have criticized India’s intellectual property regime, they have generally opted for a conciliatory policy approach. U.S. restraint has stemmed from a broader calculus that economic engagement with India is not only a favorable end in itself, but also an expression of American optimism that “the world’s largest democracy” as the cliche goes, is emerging as a responsible global power. As a developing nation, India has won sympathy for its appeals that too rigorous a regime on intellectual property and other quality controls would deprive the country of access to drugs.

The assumptions that have guided U.S. policy, however, are out of step with the preferences of a Republican base that has grown less interested in accommodating Indian interests. Only 27 percent of Republicans express confidence in India’s “ability to deal responsibly with world problems”—less even than China’s standing at 32 percent. On international development, just 13 percent believe that reducing global economic inequality should be a very important goal for the United States. Only 37 percent regard the promotion of international trade to be a very important goal of U.S. foreign policy, in part because core Trump supporters trade deals as benefiting other countries at the expense of the United States.

This political climate provides context not only for Trump’s GSP decision, but also an impending series of Republican-led moves targeting anticompetitive practices in Indian industry. Congress is requesting from the FDA briefings on its surveillance of Indian drug manufacturing facilities amid concerns that inspections are declining. And the Hatch-Waxman Integrity Act, introduced by Republicans Sen. Thom Tillis and Rep. Bill Flores, is gaining traction as a means of preventing frivolous patent challenges by generic drug manufacturers against U.S. industry.

How the Trump administration will follow up on its GSP decision remains uncertain, but a shift on the more favorable aspects of its India trade policy is likely in the cards. Although Trump has lamented the migration of the U.S. pharmaceutical industry abroad, the administration so far has avoided too strong a push on intellectual property. In an attempt to reduce drug prices in the United States, the FDA under Trump has in fact approved generic drugs at record levels in the hopes that they would introduce competition into the market.

There are signs, however, that the administration’s view on the issue is evolving. Outgoing FDA director Scott Gottlieb acknowledged in a recent interview that the “expected competition” from generic drug approvals has not materialized. To a greater extent than the administration anticipated, generic manufacturers are securing approval but opting ultimately not to develop drugs and bring them to market.

The perception, if not reality, that generic drug approvals will not solve politicians’ perennial bane of high drug costs bolsters arguments from branded pharmaceutical companies that Washington should prioritize the enforcement of patent protections. Stronger protections of intellectual property laws would complicate generic drug operations in India, but they would jibe with the president’s “America First” commitments in the sense that they would help preserve the U.S. edge in biopharmaceutical innovation.

As much as the foreign-policy establishment prefers to prioritize the bilateral relationship with New Delhi, political pressures from the Republican base and their allies in U.S. industry are making an indulgent U.S. policy on anticompetitive Indian trade practices less tenable.

Pratik Chougule is a former managing editor at The National Interest. He was a George W. Bush appointee at the State Department from 2008–2009, where he worked on the U.S.-India nuclear deal. Follow him on Twitter @pjchougule.