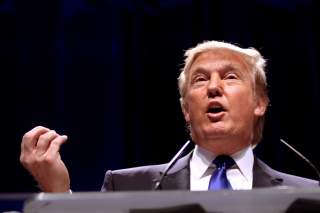 On the question of removing sanctions against Russia, President Donald Trump faces just as much resistance from Congressional Republicans as he does from their Democratic counterparts. To make matters more difficult for him, his traditional opponents in the party are not the only ones dissenting on this issue. Some legislators generally supportive of Trump have also moved to block him from discontinuing sanctions.

Even before Trump took office at the start of this year, Congress took concrete steps to consolidate and expand sanctions against Russia. On January 10th, Senators Ben Cardin (D-MD) and John McCain (R-AZ) announced the Counteracting Russian Hostilities Act. The legislation outlined a series of additional punitive measures, including new sanctions over a wide array of issues ranging from cybersecurity, Ukraine, and Syria. Furthermore, it sought to legislate President Obama’s executive sanctions. Thus, Congress sought to preempt any possible future initiative by the President-elect to engage in a new détente.

When members of Trump’s team considered easing sanctions early in his presidency, they were quickly rebuffed. Shortly after Trump’s inauguration, the administration requested the State Department to explore easing sanctions along with other means for improving relations with Russia. This provoked consternation amongst some State Department staffers, many of whom helped design the sanctions in question under President Obama. In an effort to derail this attempt at rapprochement, these officials reached out to like-minded individuals in the House and Senate. Prompted to action by the prospect of Trump lifting sanctions, a bipartisan group of Senators introduced the Russian Sanctions Review Act on February 8th. Modeled after the Iran Nuclear Agreement Review Act of 2015, the bill proposed to limit Trump’s ability to remove Russia sanctions by requiring him to submit any plan to adjust the sanctions regiment for Congress’s review and approval.

Up until now, these bills made little progress in the House and the Senate. However, that may soon change. After initially opposing additional sanctions before the Senate Intelligence Committee finished up its investigation into the Russian interference in the election, Senator Bob Corker declared on May 25th that unless Secretary of State Tillerson could demonstrate that Russia’s recent actions in Syria have become less objectionable, additional sanctions against Russia would be forthcoming. In response to an inquiry from The National Interest, a congressional source confirmed that while the Senate Foreign Relations Committee Chair wants to give the Trump administration a to chance engage diplomatically with Russia before imposing new sanctions, “he is willing to move ahead with substantive and appropriately-calibrated sanctions in coming weeks if he does not judge that adequate forward progress is being made.” With such an important voice in the Senate potentially joining the effort, the campaign for further sanctions may gain tremendous momentum in the near future.

Although Democrats have undoubtedly spearheaded the push to prevent Trump from pursuing his own “reset” with Russia, Republicans also played a substantial role. In fact, at the time of the writing of this article, more Republicans cosponsor the Senate version of the Counteracting Russian Hostilities Act than Democrats (10 to 9). Republicans also represent a significant portion of the legislators backing the Russian Sanctions Review Act in the House, and a visible segment in the Senate. Of the 42 current cosponsors in the House, 15 are Republicans. In the Senate, Republicans make up 4 of the 22 cosponsors. From these numbers, it becomes apparent that no trivial part of the opposition to the President’s Russia agenda comes from fellow Republicans.

Unsurprisingly, the ranks of these Congress-people include several prominent #NeverTrump figures and establishment neoconservatives. However, well known critics of the President and his populist agenda are not the only Republicans working to obstruct him on sanctions. A number of natural Trump allies are among those advancing a more tougher position towards Russia. For instance, one of the Russian Sanctions Review Act’s cosponsor in the House is Rep. Mike Kelly from Pennsylvania’s 3rd district. In last year’s general election, Trump beat Clinton in Rep. Kelly’s district by a margin of 26 points. Moreover, Rep.Kelly is a vocal supporter of the President. Recently, he chastised his colleagues in an interview for the Washington Examiner for their reluctance to back Trump, complaining, “There's a feeling back home that he's not getting the support he should have, and we don't like the way the inside game is working against him.”

Another Trump supporter leading the charge for more Russia sanctions is Rep. Alex Mooney from West Virginia’s 2nd district. He sponsored the House version of the Counteracting Russian Hostilities Act, which has yet to acquire any cosponsors. Like Rep. Kelly, Rep. Mooney comes from a district which Trump won by a huge margin in the November presidential election. Interestingly enough, Rep. Mooney has criticized some of the allegations about Trump’s ties to Russia as excessive and politically motivated, telling MetroNews, “I think you have people who will do anything to take him down and question anything he does.” Nevertheless, although Mooney is prepared to defend Trump against accusations of Russian collusion, this willingness does not extend to embracing his desired outreach towards Russia.

What explains Trump’s isolation this issue? For starters, Republican legislators gain no political benefit from advocating closer relations with Russia. There is no organized constituency in favor of a friendlier approach to Russia that elected officials need to be concerned about appeasing. On the contrary, most Americans view Russia as an adversary. Furthermore, representatives and senators tend to favor sanctions because they provide them with greater clout without financially burdening constituents. Kyle Parker, a senior professional staff member with the House Foreign Affairs Committee and someone who has a first-hand experience with Congressional Russia sanctions, told a Center for the National Interest audience on May 25th that sanctions “give Congress a role in foreign policy and appear to cost nothing.”

More broadly however, the GOP historically adhered to a more hawkish stance on Russia. Putin’s conduct in Ukraine and Syria provides them with little incentive to change. The Trump administration’s absence of a clearly defined case for easing sanctions only further discourages Congressional Republicans from rallying around their President on this matter.

Nearly six months into Donald Trump’s presidency, there is no sign of the uproar surrounding his supposed connections to Russia going away anytime soon. However even if it suddenly did, the President would still face considerable obstacles in lifting sanctions. Members of his own party do not share his interest in greater collaboration with Russia, both for ideological and political reasons.