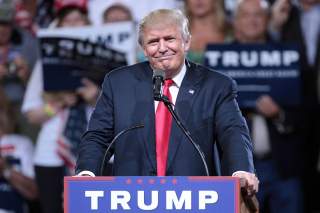 Now that he has won the presidency, Donald Trump looks, to use one of his favorite phrases, like a political genius. For those of you who blanch at the notion, get real. He scoffed at the idea that he needed pollsters or a lot of advertising. He was patently bored by the notion of fundraising, and didn’t do much of it. He lashed into his detractors and political foes with relish, deploying a barrage of insults that would have made even Lenin, who contributed much to the lexicon of insults, proud. But most notably, Trump devised an electoral strategy based on the Rust Belt that propelled him to the presidency. It was Trump, and Trump alone, who set the course of his campaign, defied his advisers, destroyed both the House of Bush and Clinton and engineered his victory, which is invariably being labeled as “stunning.”

Certainly it stunned the political establishment. During the campaign, it was his adversary Hillary Clinton who came across as a relic of the old order. Her campaign was the political equivalent of the Hindenburg disaster. It was always difficult for Clinton to reinvent herself. Her husband Bill, after all, was an original New Democrat—a centrist who broke with the left-wing of the party. Along with other members of the Democratic Leadership Council such as Al Gore and Joseph Lieberman, he took a tough stand on foreign policy and social issues. That heritage was also ingrained in Hillary, though she tried to assuage the concerns of the followers of Bernie Sanders by tacking to the left on free trade. But somewhere along the way New Democrats became Old Democrats.

Her recipe of jobs retraining and liberal social values didn’t offer much of sustenance to the white working-class that had once formed the base of the Democratic party. Democrats who try to blame the election results exclusively on FBI Director James Comey or on WikiLeaks are making a big mistake. These may have contributed to Trump’s victory, but they hardly formed its substance. Something much more fundamental is going on.

Writers such as Michael Lind warned several decades ago about the rise of an America “overclass” that was indifferent to the economic fortunes of the rest of the country. Both the Democratic and Republican parties connived at this development. Now comes the revenge of the repressed who Trump appealed to with his incendiary rhetoric.

Trump’s accomplishment may be to reshape the Republican party into a populist one. The Republican retention of the Senate and House of Representatives means that, at least for two years, gridlock should be a thing of the past. The burden for Trump and the GOP will be enormous. The prospect of Congress actually legislating brings to mind Lady Markby’s remark in Oscar Wilde’s play An Ideal Husband: “Really, now that the House of Commons is trying to become useful, it does a great deal of harm.”

Trump will be intent on repealing ObamaCare, but what will replace it? Disputes are certain to emerge about taxes and spending as well. To what extent will deficit hawks clash with supply-siders? Does Trump really want to spend double what Clinton proposed on infrastructure programs? How will he pay for a massive military buildup? How will Republicans like Paul Ryan deal with, or adapt to, Trump’s demands for renegotiating NAFTA? Will Trump really pursue a trade war with China, one that could trigger a recession, if not a global economic meltdown?

When it comes to foreign policy, Trump also faces a litany of choices and difficulties. He has suggested that he might meet with Russian president Vladimir Putin before he takes office. He will have to assess American relations with NATO allies as well as the pivot to Asia that the Obama administration began to execute. Writing in the Washington Post, David Ignatius suggests that Trump “will bring an intense “realist” focus on U.S. national interests and a rejection of costly U.S. engagements abroad.” The key question he will have to answer is what actually constitutes realism. The next question, of course, is which advisers will help him define that. Not since Dwight Eisenhower has America had a president who never held prior political office—and in the military, Eisenhower was the politician par excellence.

Above all, Trump will confront the inherent limitations of the presidency. He can’t simply issue ukases. Trump will collide with the uncomfortable truth Founding Fathers sought to keep the three branches of government in a kind of equipoise. Though it seems doubtful that Trump is familiar with it, Marx’s 18th of Brumaire contains more than a bit of wisdom: “Men make their own history, but they do not make it as they please; they do not make it under self-selected circumstances, but under circumstances existing already, given and transmitted from the past.” For now the GOP is Trump’s party. But if Trump really wants to show that he’s mastered the art of the deal, he will have to deal artfully with both his friends and foes. It's a tall order.

Jacob Heilbrunn is editor of The National Interest.
Image: Courtesy of Gage Skidmore