With Trump's Scandals, There's Still No There There 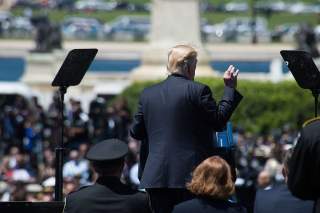 Think back to the last time a president was impeached for obstruction of justice. Did Richard Nixon come to mind? If so, think again. Nixon was never impeached. The president you should imagine as you read about Trump’s troubles with the FBI is Bill Clinton. President Clinton obstructed justice in an absolutely clear and classic sense of the term: he lied under oath to pervert the outcome of a trial. But how many of the people clamoring for Trump’s impeachment today would defend the impeachment of Bill Clinton nearly twenty years ago?

Democrats and a certain segment of thought leaders who deem themselves the custodians of political decency have been musing about impeaching Trump since the day of his inauguration—or even before. It’s become an idee fixe. Now their hopes fly high on the revelation that fired FBI director James Comey wrote a memo recording that the president asked him to drop the bureau’s investigation of former National Security Advisor Michael Flynn. Right after Flynn’s resignation in February, according to reports of the memo, the president told Comey, “I hope you can see your way clear to letting this go, to letting Flynn go.”

The president should not meddle in FBI investigations like this. Whether such meddling constitutes obstruction of justice in a legal sense, however, is a separate question. Trump did not order Comey to shut down the investigation of Flynn, which is still ongoing. And Comey did not react the way an FBI director might be expected to act when given an unconscionable or illegal order: Comey did not resign, and he does not appear to have contacted Congress to claim the president was acting illegally. He merely shared the memo with a handful of associates and then filed it away, to be brought to light months later, only after his career setback.

The law is not necessarily what matters most in impeachment proceedings—they’re a political act. But the last time a president was impeached, there was proven wrongdoing: Bill Clinton did in fact perjure himself in a civil suit. Nixon resigned before he could be impeached, but at the heart of Watergate there was an illegal act—the break-in itself—and Nixon had indisputably paid hush money for, in the words of the articles of impeachment prepared by the House Judiciary Committee, “the purpose of obtaining the silence or influencing the testimony of witnesses, potential witnesses or individuals who participated in such unlawful entry and other illegal activities.”

The inconvenient fact remains that Donald Trump, who has made a habit of behaving in ways that defy political etiquette and conventional ethics, is not credibly alleged by anyone to have committed a crime. Whether any of his subordinates, such as Flynn, did so is still an open question. To expect Trump to be removed from office for obstruction of justice in the absence of any clear-cut evidence of wrongdoing seems farfetched. Just recall what happened when Clinton was impeached on charges of obstruction and perjury when the case was airtight: even the Republican-controlled Senate of 1998 did not judge Clinton’s peccadillos to merit removal from office. He was acquitted of both charges.

Several commentators have noted that no president has been impeached—or, in Nixon’s case, been under threat of impeachment—when his own party controlled Congress. But the difficulty of impeachment is still greater than that fact suggests: even with Congress in the hands of the other party, neither Andrew Johnson nor Bill Clinton could be convicted and removed. What those who imagine an impeachment of Trump must imagine, therefore, is a Republican Congress today treating Donald Trump more harshly than Newt Gingrich’s Republican Congress treated Bill Clinton in 1998—or a much earlier Radical Republican Congress treated Andrew Johnson in the aftermath of the Civil War.

There is no crime, the obstruction of justice is contestable and the politics make no sense—these are strong reasons to think impeachment is not on the horizon. Comey is reported to have other memos of other conversations with the president, and no doubt those might add to Trump’s embarrassment. Yet they are unlikely, based on Comey’s behavior, to detail impeachable offenses: Comey was content to serve under Trump, after all, up to the minute he was fired.

President Trump’s sensitivity on the subject of Flynn does give his opponents hope. Why is the president protecting him? Flynn may indeed have committed a crime, but the most likely possibilities are not terribly incriminating for Trump or politically explosive. First, the grand jury investigating Flynn is interested in his work for Russia and Turkey, and it’s possible that Flynn at one time or another violated the rules that apply to paid foreign lobbyists. (He may even have violated the recently ballyhooed emoluments clause of the Constitution.) Second, Flynn lied to Vice President Pence about the subject matter of a December telephone conversation between himself and the Russian ambassador, Sergey Kislyak. If Flynn told the FBI the same lies he told Pence, he could be charged with perjury. And unlike Bill Clinton’s civil-suit perjury, lying to federal agents is a felony that can mean prison time.

One thing Flynn appears not to have done: although he did discuss sanctions with Kislyak, he did not offer Russia any deals to lift or ease them. Flynn’s conversation with Kislyak was intercepted by U.S. intelligence as part of its routine monitoring of foreign officials, and none of people briefed on the transcript, including former acting attorney general Sally Yates, has indicated that Flynn offered Russia a reprieve from the sanctions. He did hold out the possibility of warmer relations, though. As the New York Times reported after Flynn’s resignation, in the December call, “He never explicitly promised sanctions relief, one former official said, but he appeared to leave the impression that it would be possible.”

Perhaps there is something more in Flynn’s background, some as-yet unsuspected crime that would implicate President Trump. The president’s defensive behavior would be consistent with that, though there is no shortage of other reasons—beginning with a stubborn temper—that can account for the president’s defensiveness regarding Flynn. Until evidence of serious wrongdoing on Flynn’s part materializes, the speculation is wholly idle.

In the minds of Democrats and many of Trump’s critics in the press, Trump is worthy of impeachment simply because he is Donald Trump. He is uncouth, unpredictable and he willfully refuses to follow the unwritten rules that dictate the way Washington works. He has violated “norms.” He has ticked off the permanent bureaucracy and the intelligence community. Trump is a living, breathing affront to all that is holy and decent in Washington orthodoxy.

The trouble is, we just had an election about this, and Donald Trump won. Grassroots Republicans are in revolt against Washington’s orthodoxy, and not only Republicans: in a majority of states, majorities of voters took a chance on Trump to shake up the nation’s capital. If he is impeached and removed on anything but the most ironclad and universally accepted grounds, the country will experience a great paroxysm—not of violence, one hopes, but a much more radical rejection of the political establishment in both parties, and of the beyond-partisan “deep state,” than anything we have seen before. The crisis of legitimacy that led to Trump’s election in the first place will only get worse. The brutal truth is that an impeachment is already underway—not of the president, but of Washington’s entire political elite.