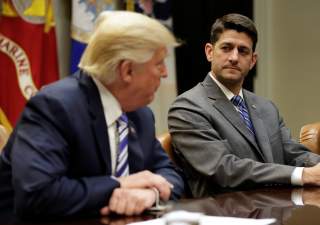 This week’s budget deal is fiscally irresponsible. But it just may have cleared the legislative schedule for serious action on much-needed tax reform.

The lamentable budget deal suspends the debt limit—and continues all discretionary spending at current (FY 2017) levels—through December 8. This allows lawmakers to delay making politically difficult spending decisions on defense and all other “nonmandatory” programs for another three months.

The sweetener in the deal was a provision to provide $15 billion in immediate relief to help states cope with the devastation caused by hurricanes and other disasters this year. It was a politically opportunistic move, but it only buys Congress a little bit of time.

Three months from now, Congress and the administration will once again face a funding deadline—one that, if unmet, may force a partial government shutdown.

While both the continuing resolution and the debt-limit suspension expire on December 8, only the former absolutely requires congressional action. The Treasury Secretary can employ a variety of so-called “extraordinary measures” that can buy Congress additional time—probably until next spring—before the new debt limit will restrict the Treasury’s borrowing authority. Unfortunately, by then Washington will have rung up nearly $1 trillion more in debt.

This week’s budget deal was negotiated between the president and Democratic leaders, and that scenario may well be repeated in December. Appropriating funds for defense and nondefense discretionary programs requires a sixty-vote majority in the Senate. Given the likely contours of such a package, fiscally conservative Republicans can be expected to balk at that package, which means Trump will have to win Democratic support to get the deal through.

President Trump had asked for a $54 billion increase in defense spending for fiscal year 2018. Getting that done will mean revising the Budget Control Act spending limits again. There is a real risk that the president may abandon his earlier call to offset defense-spending increases with cuts to domestic programs in order to bring Democrats on board. We saw this scenario play out twice already: last May and again this September.

That call was fiscally responsible. It challenged lawmakers to reprioritize federal spending so that it could channel more resources toward a core constitutional function of the federal government. But standing firm on that principle all but guarantees monolithic opposition from Democratic senators, bringing about a partial government shutdown. The administration’s appetite for such an impasse can’t be known this far in advance, but given recent history, it appears to be a rather unlikely outcome.

But there is hope for fiscal conservatives. In kicking the can again on spending and debt issues, lawmakers freed up legislative time, which they can put to good use by taking up pro-growth tax reform proposals. It also puts additional pressure on Republicans to get cracking on tax reform—a top priority for Trump—lest the president should decide to turn to the other side of the aisle for help on that issue, as well.

Fiscally responsible, pro-growth, tax reform will provide both tax and spending relief. To get there, lawmakers will need to adopt appropriate revenue and outlay baselines that allow for reconciliation.

At a minimum, the revenue baseline should be lowered to reflect current policy and to make room for the repeal of Obamacare’s harmful tax increases. That would mean about a $1.5 trillion reduction in projected revenues—$1 trillion from Obamacare taxes and about $500 billion from expiring tax provisions.

To facilitate the kind of tax changes discussed by President Trump and proposed by House Speaker Paul Ryan and Ways and Means Committee Chairman Kevin Brady, the revenue baseline would need to accommodate about twice that much. Congress could cut spending by $3 trillion or more through a combination of targeted spending cuts that right-size the federal government and a mandatory spending limit with built-in enforcement. A limit—with enforcement—would encourage much needed discussion about the size and scope of federal entitlement programs, the major drivers of national debt.

The Budget Control Act of 2011 reduced federal spending by $1.2 trillion, almost exclusively through cuts to defense and other discretionary spending programs, which make up only one-third of the budget.

Budget plans introduced in the House of Representatives proposed cutting spending by more than $5 trillion to balance. Reducing federal spending by $3 trillion over the next ten years is quite feasible and reasonable. What’s more, it is necessary.