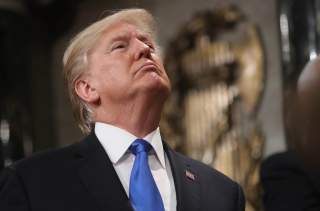 President Trump called for bipartisanship in his first State of the Union address. But his speech was less an attempt to reach across the aisle to Democrats who despise this president and his deplorable voters than it was an effort to cement the successful political coalition that Trump built in 2016. That coalition consists of everyday Republicans, some part of what was the once great American economic middle, and forward-thinking nationalists who want to rebuild what has been destroyed by more than two decades of globalist liberalism. Trump pitched his appeal to these three groups, and largely cast aside the concerns of others—such as libertarians and civil libertarians—though he made one important overture to those concerned with the “right to try” experimental medical treatments.

Trump is president because he won not only regular Republicans—as Mitt Romney did in 2012—but also a critical mass of middle-class, middle American voters in states that had not given their electors to a GOP presidential ticket since the 1980s. Trump rode to power on what remains of the great majority that gave Richard Nixon and Ronald Reagan their landslide reelection victories in 1972 and 1984. Other Republicans long ago gave up on the idea of a national majority composed of a middle class and working class united by patriotism and economic solidarity. They were convinced by consultants like Karl Rove that the only way to win was to forget about the middle and aim at the edges: at maximizing marginal turnout among Republicans, particularly religious ones, or at winning hip demographics like “soccer moms” or recent immigrants. Mitt Romney spoke for this kind of Republicanism when he said that 47 percent of Americans should just be written off as hopeless for the GOP.

Trump, by contrast, campaigned among the 47 percent. He promised to fight to keep their jobs in America—or else to bring them back—and to protect their Social Security and other benefits. After a preamble acknowledging the natural disasters of the past year, and the politically motivated attempted murder of Rep. Steve Scalise and other Republicans, Trump’s address placed jobs first. And he had plenty to say to employment-minded middle America: wages were rising, new unemployment claims were at their lowest level in forty-five years, and unemployment among blacks and Hispanics was at record lows. Some 2.4 million new jobs had been created in the last year, “including two hundred thousand new jobs in manufacturing alone,” said Trump. Later in the speech, Trump would tout “beautiful clean coal” and the rollback of regulations that would “get Motor City revving its engines again.” He presented a picture of an America that was no longer postindustrial—or, for Michigan and Ohio and Pennsylvania and West Virginia, post-employment.

That vision was tightly integrated with conventional Republican policy priorities: Trump pointed to the tax reform passed at the end of last year and his scaling back of regulation as driving forces of reindustrialization. Religious liberty and “totally defending our Second Amendment,” two themes sacred to Republican voters (but not only them), also earned a mention. “We are appointing judges who will interpret the Constitution as written, including a great new Supreme Court justice and more circuit court judges than any new administration in the history of our country,” Trump boasted. In all this, Trump has delivered what conventional Republicans demand, and he has done it thoroughly and in good faith. For Trump, appealing to Rust Belt voters and donor-class Republicans at the same time makes sense. To be sure, the GOP has long claimed that Main Street and Wall Street can be on the same side, but in practice the government-managed investment schemes and tax credits beloved by Republican technocrats have never been a substitute for what the Silent Majority really wants: secure jobs that pay well. Trump, at least in his rhetoric, seems to know where the old majority and the aspiring overclass have common ground, and where the orthodoxies of the latter have to give way to the bread-and-butter demands of the former. Partly through skill and partly thanks to luck, Trump has been able to deliver satisfying results for both of these parts of his coalition during his first year. But what if circumstances lead to their interests diverging irreconcilably?

That’s the question to which the third element of Trump’s coalition, the nationalists, address themselves. They are not numerous: there are far fewer hard-line immigration restrictionists and economic nationalists than there are regular Republicans or jobs-driven middle American voters. But the nationalist right infused a great deal of activist energy into Trump’s 2016 insurgency, and it is “forward thinking” in the sense that it is searching for new formulas to replace the globalist Republicanism that voters turned decisively against beginning in 2006. Trump’s call in the State of the Union for $1.5 trillion in infrastructure spending, to “build gleaming new roads, bridges, highways, railways, and waterways all across our land,” signals a willingness at least to dabble in a kind of big-government Republicanism beyond the orthodox GOP commitment to ever-greater military spending. While Trump’s economic nationalism has been called into question for being little in evidence in policy so far, the president on Tuesday condemned “decades of unfair trade deals that sacrificed our prosperity and shipped away our companies, our jobs, and our wealth.” Where Bill Clinton famously proclaimed in 1996 that “the era of big government is is over,” Trump said instead, “The era of economic surrender is totally over.” “From now on,” he continued, “we expect trading relationships to be fair and, very importantly, reciprocal.”

Nationalism gives Trump and a Trumpified Republican Party a way to appeal to—and in theory to serve—the middle-class and working-class majority when its interests diverge from those of those of the GOP’s donor class. Nationalism means economic nationalism in this case, but it also means an emphasis on immigration reform and an affirmation of American patriotism or, in worse taste, American chauvinism. Near the end of the State of the Union, the Congress broke into a chant of “U.S.A! U.S.A!” that was sheer boob-baiting theatrics. During his remarks, Trump took obvious delight in upbraiding NFL players for refusing to stand for the American flag. More seriously, he also heavily emphasized support for law enforcement and military veterans. Trump, appealing to some of the law-and-order sentiments that once pulled voters to Richard Nixon, may be able to outflank the patriotic posturings of multicultural and globalist Democrats and Republicans—the Wilsonian excesses of George W. Bush or the spectacle of John Kerry snapping a salute to the Democratic National Convention, “Reporting for duty!”—but it’s a practical patriotism that the American middle demands most of all. It means pride backed by prosperity and security, not grand plans to transform America or democratize the world.

Civil libertarians had reason to be disappointed in the State of the Union, as Trump made a firm commitment to keep the detention center at Guantánamo Bay open. But then, Barack Obama failed to close it after eight years. Economic libertarians who often find themselves awkwardly grouped with Republicans had an equally great disappointment in Trump’s stated intention to end the sequester and boost military spending. On the other hand, not only did Trump endorse a “right to try” experimental medicines, he also alluded to “reforming our prisons to help former inmates who have served their time get a second chance in life,” an effort that many libertarians would endorse. Clearly the president is not nearly as concerned about including libertarians in his coalition as he is about keeping ordinary Republicans, the old majority middle and nationalists on his side. Yet he shows enough interest in coalition building that even the libertarians get a branch or two extended to them.

In the foreign-policy portion of his address, Trump spotlighted the evils of the North Korean regime, and made brief criticisms of China, Russia, Cuba, Venezuela and Iran. All his remarks were in keeping with what one would expect from a leader who has in mind an audience of Republicans, patriots and nationalists—he underlined American strength and the perfidy of enemies and rivals. But his encomium to freedom in the abstract was no more ambitious than what his coalition would require: he did not sound like a man possessed of the urge to set the world aflame in the name of some ideological ideal. The danger is that bad advice will set him up to slide into a major conflict anyway.

This first State of the Union address by President Trump was not the shocking thing that his first inaugural address was; this was a traditional State of the Union, almost one that could have been delivered by any Republican. Yet it was carefully composed, designed to bring the three constituencies that matter most to Trump and his administration into order, if not complete harmony. Donald Trump is embarked on making something new, and he continues to do it whether his language is startling or, as on Tuesday, comparatively restrained.