Trump's Speech Signalled the End of an Era for the GOP 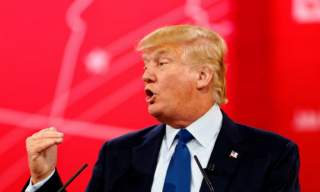 An era ended for the Republican Party Thursday night with the delivery of Donald Trump’s acceptance speech at the GOP’s Cleveland convention. The old era began when Barry Goldwater accepted the Republican presidential nomination in 1964 and, in doing so, explicitly rejected the Eastern GOP establishment that had dominated the party for decades. Few realized at the time that the Goldwater nomination would usher in a new Republican era anchored in the rising South and West. Most pols and commentators back then thought the hapless Goldwater represented nothing more than a passing blip on the radar screen of politics.

But in truth the Goldwater nomination dealt a crushing blow to the old establishment and presaged a new party with new political sensibilities, new pools of support and new regional and ideological roots. Goldwater went down to a humiliating defeat, but the Republican Party rose to higher levels of strength and reach.

Now that party is over, killed by Trump’s capture of it and by his resolve to reshape and redirect it based upon a new vision of political opportunity spawned by fast-changing national and global realities. Trump made clear that, if elected, he will govern as no Republican has governed before. And, if he is defeated, he still has redefined the party. Like Goldwater, he is far more than a mere radar blip. There will be no going back.

Cable television commentators were quick to label the speech as “pessimistic,” “angry” and “ominous-sounding.” The New York Times rushed into print with a lead paragraph suggesting Trump’s message was designed to salve his followers’ yearnings for “extreme” measures. An interesting adjective, that. It’s the same word directed at Goldwater in 1964 by party stalwarts clinging to the status quo of that time.

In truth, the Trump speech, far from extreme, merely put forth one plausible interpretation of what ails America at a time when polls suggest that nearly two-thirds of its citizens believe the country is on the wrong track. That interpretation got him the nomination from people who aren’t looking for extremism so much as a credible and realistic view of the state of the country. That’s what Trump gave them. It may not be the nation’s majority view, but it is now the Republican view.

The new Republican view is a populist view. This is not a party with a strong populist heritage. Under William McKinley in the 1890s, it successfully nullified the fiery populism of William Jennings Bryan. It served as establishment party during the 1920s and was the party of big business in the Eisenhower years. Reagan manifested tinges of populism in the 1980s with his rhetoric extolling the capacity of ordinary Americans to order their own lives without interference from governmental mandarins, but that quickly dissipated with the emergence of the two Bush presidents, Herbert Walker and George W., whose political impulses always seemed to be largely establishmentarian.

Not Trump’s. He rails against the country’s elites, whom he accuses of having hijacked the country’s political system to their own ends. “America is a nation of believers, dreamers, and strivers,” he declared, “that is being led by a group of censors, critics, and cynics.” He called for a major adjustment in the country’s political balance of power. “No longer,” he said, “can we rely on those elites in media, and politics, who will say anything to keep a rigged system in place.”

The rigged system was a central motif of Trump’s speech. “I have joined the political arena,” he said, “so that the powerful can no longer beat up on people that cannot defend themselves.” He cited, as Exhibit A, Hillary Clinton, whom he portrayed as a master of manipulating the levers of government to her own political and financial benefit. “Big business, elite media and major donors,” he said, “are lining up behind the campaign of my opponent because they know she will keep our rigged system in place.”

Note the inclusion of big business among the elite institutions in Trump’s sights. This isn’t the kind of rhetoric that has propelled candidates to the Republican nomination in the past. Thus, it represents a major departure for the party.

Another departure is Trump’s explicit attack on globalism and embrace of nationalism. “Americanism, not globalism, will be our credo,” he says. This represented yet another major departure from the party of the past.

Nothing reflects this new direction more starkly than the electoral fate of Jeb Bush, the last scion of a dynastic family whose members over three generations held positions as U.S. senator, U.S. representative, state governor (two states), and president (three terms), not to mention special envoy to China, U.S. ambassador to the U.N., and CIA director. Trump dispatched the last Bush so quickly that the hapless Floridian hardly seemed to know what hit him. What hit him was the sentiment of large numbers of Republicans that Jeb Bush’s brand of status-quo politics was strangling America.

Consider his views on immigration. Bush suggested in 2014 that illegal immigration “shouldn’t rile people up” because those crossing into America illegally were doing so out of “an act of love” toward their families, who are better off as American illegals than they would be in their native lands. Thus did Bush signal unmistakably that he simply didn’t take seriously the problem of illegal immigration.

Trump takes it very seriously. “Americans want relief from uncontrolled immigration,” he said in his speech. He cited figures indicating a major increase in illegal immigration so far this year over last year and focused on violent crimes committed against U.S. citizens by those who had no legal right to be in the country. He scored his presumed Democratic opponent, Hillary Clinton, for advocating a 550 percent increase in Syrian refugees allowed into the country and her acceptance of “sanctuary cities” that seek to shield illegals from federal deportation actions.

And it isn’t simply illegal immigration that gets Trump’s attention. “Decades of record immigration,” he said, “have produced lower wages and higher unemployment for our citizens, especially for African-Americans and Latino workers.” He called for “an immigration system that works, but one that works for the American people.”

Thus do we see a stark contrast on the immigration issue between most Republicans of the past few years and Trump now. Before Trump entered the GOP nomination fight, the Republican Party had been looking for a way to gain enough political credibility on sealing the borders so it could foster some kind of amnesty plan for current illegals. That now is politically untenable, and it is politically untenable because of Donald Trump.

Trump’s views on trade represent another major departure point for Republicans. The GOP nominee has utterly rejected the free trade mantra that has dominated Republican economic thinking since the 1950s. He railed against NAFTA as “one of the worst economic deals ever made by our country.” He declared that would wouldn’t “let companies move to other countries, firing their employees along the way, without consequences.” He threatened to go after China for its “outrageous theft of intellectual property, along with [its] illegal product dumping, and…devastating currency manipulation.” He vowed: “No longer will we enter into these massive deals, with many countries, that are thousands of pages long—and which no one from our country even reads or understands.”

On foreign policy, he said, “We must abandon the failed policy of nation building and regime change that Hillary Clinton pushed in Iraq, Libya, Egypt and Syria. Instead, we must work with all of our allies who share our goal of destroying ISIS and stamping out Islamic terror.” But of course it wasn’t just Clinton and Democrats who pursued nation building and regime change. George W. Bush pursued that dual doctrine through much of his presidency, and many Republicans continue to push for such actions. Thus did Trump place himself against what had been a prevailing GOP doctrine for at least twenty years.

Further, he didn’t rail against, or even mention, the man who has become the favorite whipping boy of most Republicans—Russian President Vladimir Putin. It’s difficult to imagine any other Republican at that podium, among all the Republican candidates this year, who wouldn’t have warned against the presumed dangerous ambitions of Putin.

To be sure, the Trump speech contained several traditional elements of standard Republican fare—tax cuts, an assault on federal regulations, repeal and replacement of the Affordable Care Act, an initiative against wasteful federal spending, a commitment to appoint strict constructionists to the Supreme Court. But the significance of the speech was in its departure from traditional Republicanism in major areas of policymaking. Donald Trump didn’t just defeat sixteen rivals in getting the GOP nomination; he also set in motion a redefinition of his party. It isn’t clear precisely where the party is going, or what role Trump will play in getting it there. But it is clear that the GOP isn’t going back to the days before the billionaire builder audaciously rode down that Trump Tower escalator and entered the maelstrom of American politics.