Trump's Speech: A Vision, but No Strategy 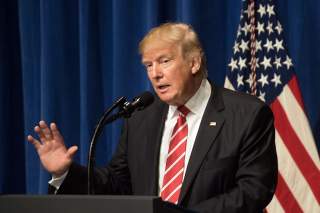 Donald Trump’s address to a joint session of Congress was nowhere near as incendiary as many of his speeches during his successful run for the presidency. He began by condemning the anti-Semitic and racist incidents that have mushroomed in the past month. And he ended with a vision of a peaceful, prosperous America celebrating its 250th anniversary in nine years’ time. Through it all, even when he spoke of supporting veterans and the debt the nation owes them, the vast majority of Democrats sat on their chairs and on their hands. Their reaction does not bode well for ending the stalemate that has gripped Washington for the past dozen years.

In order to realize his objective of terminating sequestration, which has stifled both necessary increases in defense spending and urgent expenditures in the nondefense realm, notably repairing the nation’s infrastructure, the president will need the support of Democrats, as well as budget hawks within his own party. Yet the plans unveiled by the Office of Management and Budget, which call for reductions in nondefense spending on a dollar-for-dollar basis commensurate with defense spending increases, and which promise to satisfy budget hawks like OMB Director Mick Mulvaney, are unlikely to win support from Democrats, nor, for that matter, moderate Republicans. At the same time, defense hawks are already grumbling that the president’s proposal for a $54 billion increase in defense spending in fiscal year 2018 really represents only a 3 percent hike over the Obama administration’s projected increase for $35 billion. The chairmen of the two Armed Services committees, Sen. John McCain and Rep. Mac Thornberry, are instead calling for a fiscal 2018 defense budget of $640 billion, which, they correctly argue, would move defense spending beyond merely plugging the requirements gap that has widened with every passing year since the Budget Control Act came into force. Moreover, both the Obama and Trump proposals, as well as, of course, that of McCain and Thornberry, assume that the Congress would do away with the sequester, which may not be the case at all. Indeed, by simply taking no action, Republicans who are quietly unhappy with the administration’s plans would enable Democrats to block any lifting of the sequester unless the administration yields to demands for increases in nondefense spending as well.

The prospect of more gridlock in Washington is certain to upset America’s nervous allies and friends, who shudder with every report of a new presidential 3 a.m. tweet. While President Trump emphasized the importance of NATO in his address, underscored America’s commitment to Israel, had tough words about Iran and spoke as well of the need for Muslim allies to assist in the fight against radical Islamic terrorism, he had nary a word about China—other than to note how many American jobs were lost since that country joined the World Trade Organization in 2001. He had even less to say America’s Asian allies and partners; other than Australia being cited for its talent-based immigration policy, not one was mentioned by name. Nor did he say much about Latin America, except insofar as there was a need to combat drugs, restrict immigration, and build a wall along the Mexican border. Africa was clearly the forgotten continent and, significantly, Russia went unmentioned by name as well. Nor, indeed, did the president explain how his emphasis on renegotiating America’s trade relations with the world would not undermine his desire to work with allies and partners, especially in Asia, who are unhappy with the reversal in America’s trade policies. In other words, the president offered no overarching sense of strategy for America’s engagement with the world, even as he stressed that the United States would remain engaged.

Coupled with the absence of an articulated strategy—other than his assertion that he represented the United States and not the world—was the president’s apparent effort to moderate if not abandon many of the more extreme positions that he had articulated both during the campaign and in the run-up to his inauguration. Gone was any mention of moving the American embassy to Jerusalem, or indeed, any promise to Israel other than the aforementioned guarantee of support. Gone, too, was the promise to label China as a currency manipulator, or any vocal support for Taiwan, or any reference to Japan or Korea going nuclear, or to NATO’s obsolescence. His more measured tones are certain to reassure nervous allies who have been spooked by his tweets; and his moderation clearly owes much to the presence of so many generals leading his national security apparatus. Like the vast majority of military men and women who actually have seen combat, Secretaries Mattis and Kelly, as well as General McMaster, the new National Security Advisor, are far more cautious about engaging in foreign adventures than many civilians for whom war is too often a vicarious experience. In that vein, it is not at all surprising that General McMaster advised the president not to use the phrase “Islamic terrorists” for fear of alienating Muslim allies, or that Secretary Mattis made it clear to Trump that torture rarely produced positive results: surely these were not the suggestions that war hawks would proffer.

The fear that many have, that the administration reflects an imbalance in civil-military relations, is seriously misplaced: America’s officers are deeply committed to the principle of civilian control, and many have sought to impart those principles to the militaries of other nations. Moreover, there is every indication that the generals are working well with Secretary of State Tillerson; this in itself would be a welcome departure from the often fraught relations between State and Defense.

Whether Trump’s generals, together with Secretary Tillerson, can override the less well-informed but highly charged impulses of Stephen Bannon and his coterie, particularly with respect to trade and immigration, is quite another matter. To the extent they can, it is likely that the administration will both produce a coherent national-security strategy and a more realistic approach to budgeting that recognizes the need for compromise in order to be rid of the sequester once and for all. The result will likely be a tighter relationship with friends and allies who will still be at the receiving end of Trump’s intense pressure to meet their own defense-spending commitments.

On the other hand, should the president’s innermost circle hold sway over national-security policy, the result will lead only to greater insecurity—not only for America’s nervous partners, but for the United States itself—and the president’s vision for America’s next great anniversary will prove to have been nothing more than the wishful thinking that has powered all too many of his late-night tweets.