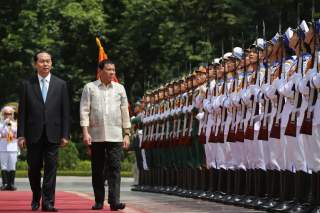 “We cannot stop China from doing its thing. Even the Americans were not able to stop them,” remarked Philippine resident Rodrigo Duterte in response to reports that China could soon move ahead with building facilities on the hotly contested Scarborough Shoal. His comments provoked a firestorm, with leading political figures and intellectuals calling for the president to refrain from such blatantly defeatist pronouncements, while others threatened impeachment against Duterte.

The whole episode has underscored the profound public mistrust of China as well as Duterte’s desperate efforts to prevent any disruption of warming ties with Asia’s largest economy. And there is vigorous effort by the security establishment to ensure Duterte’s China-friendly gestures aren’t mistaken as strategic acquiescence.

No less than Defense Secretary Delfin Lorenzana has repeatedly warned about Chinese designs in Philippine-claimed waters, while describing any construction activities in the Scarborough Shoal as utterly “unacceptable.” In a remarkable departure from Duterte’s anti-American tirades, the defense secretary emphasized how America has been, so far, instrumental in preventing that nightmare scenario. The message of Duterte’s generals is clear: China can’t be fully trusted, while America is the Philippines’ best hedging bet.

Just days earlier, Xiao Jie, the communist party secretary of the city of Sansha, the prefecture that covers disputed South China Sea features such as the Paracel Islands and Scarborough Shoal, announced that Beijing could soon build an “environmental monitoring station” in the disputed shoal, which lies just above one hundred nautical miles from Philippine shores and the strategic bases in Subic and Clark.

As a leaked internal magazine article of the People’s Liberation Army poignantly reveals, the establishment of seemingly innocuous structures on disputed features serves the dual purpose of fortifying Chinese sovereignty claims and concealing the militaristic dimension of its expanding strategic footprint in the South China Sea.

Since 2013, we have seen this “endurance warfare” strategy deployed across both the Spratly and Paracel chain of islands. First, China began discussing the construction of lighthouses, marine research facilities and tourist resorts on disputed land features. The official spin was that these were either part of efforts by China to provide, as a responsible stakeholder, international public goods and/or accommodate ordinary folks interested in witnessing the dazzling marine biodiversity of the South China Sea.

Overtime, however, it became increasingly clear that China was laying down the foundations of an exclusion zone by constructing a sprawling network of airstrips and military facilities, which allows China to intimidate smaller claimant states, restrict their supply lines and disrupt their surveillance and reconnaissance activities in the area. Equipped with advanced air-defense systems, China seems to be prepared for blitzkrieg kinetic action, if necessary.

Eager to maintain warm ties with the Philippines, the Chinese government has denied any plans to build facilities in the contested shoal and underlined how it “cherish[es] the good momentum of the bilateral relationship [with Manila] and will be committed to pushing forward the sound, steady and rapid growth of the relationship.” (Earlier reports of the Sansha chief about Chinese plans in the shoal have also mysteriously been deleted.)

In fact, in the past month alone two senior Chinese officials have visited the Philippines in order to secure rapprochement with America’s oldest ally in Asia.

First came Chinese commerce minister Zhong Shan, who discussed the establishment of a joint industrial park and other major investment opportunities with Duterte. Not long after, Vice Premier Wang Yang followed through, carrying with him a $6 billion economic assistance package, which included up to thirty big-ticket infrastructure development programs and investment deals that cover all key sectors of Philippine economy.

The Chinese statecraft is clear and simple: Offer poor, smaller neighboring countries economic incentives in exchange for strategic acquiescence on sensitive issues, including territorial disputes. China has quite successfully deployed this strategy towards Southeast Asian countries such as Malaysia, which rarely openly criticizes Beijing’s activities in the South China Sea.

Other countries like Vietnam, South Korea and Indonesia have fought back with growing vigor in recent years, despite their deep economic interdependence with China. The Philippines, however, has rapidly shifted gears in the past year, abandoning resistance in favor of engagement under Duterte’s watch. Throughout my conversations with senior officials of major countries across the Asia-Pacific region in recent months, it seems the consensus is that it is just a matter of time before China moves ahead with consolidating its administrative control over the Scarborough Shoal.

The relevance of the disputed land features lies in the fact that it is currently the sole missing piece in the “strategic triangle,” which would allow Beijing to dominate the South China Sea and more effectively restrict freedom of military navigation and overflight of competing claimant states such as the Philippines and Vietnam and strategic rivals such as the United States, Japan, India and Australia.

Bereft of sufficient military capabilities, the Philippines, however, has limited options. As Duterte put it in brutal honesty, “So what do you want me to do? Declare war against China? I can, but we’ll lose all our military and policemen tomorrow, and we are a destroyed nation.” At this point, much will depend on how far allies, such as Washington, DC, and like-minded partners, such as Tokyo, are willing to offer in concrete assistance should Manila choose to fully resist Chinese designs in the Scarborough Shoal. So far, the Trump administration has yet to send a single major senior official to Southeast Asia and the Philippines. Not a very encouraging situation for allies in fear and trembling.