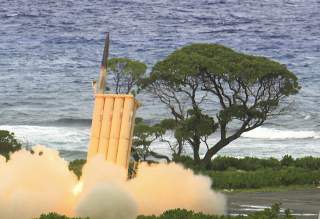 Private chats with Japanese or Chinese leaders would disabuse journalists ready to listen of the impression that this policy continues President Obama’s passivity. The former are happy that Obama’s “red line” on the use of WMD was finally enforced by President Trump, and that real pressure is finally on China.  The latter are less happy with the pressure that Trump's national-security cabinet is putting on them to put the squeeze to Kim Jong-un.

Indeed, a quick review of the Trump approach to North Korea reveals anything but passivity.

First, there is the return of the exercise of American power. The most important moment of the Trump-Xi summit was Trump’s delivery of the news that the U.S. military had targeted Syria for using chemical weapons. Trump reintroduced the concept of decisive American action to a Chinese leadership that is impressed by power above all else. Since China already believes that all U.S. action in the world is taken with an eye toward containing the Middle Kingdom, the U.S. move certainly left the impression that a message was being conveyed to Beijing.

Second, there is robust diplomacy. Senior Trump officials report to me that Tillerson’s diplomacy with China has been unrelentingly results oriented. No occasion is missed to press China on its existing United Nations Security Council resolution obligations regarding sanctioning and isolating the Hermit Kingdom. The Chinese have also been pressed by the administration to crack down on a much-expanded list of Chinese individuals and entities engaged in trade with North Korea, and told that if they don’t, we will.

This expansion of sanctions is modeled on the crippling Iran sanctions (without the bad deal that followed), an approach that has not been tried before.

Besides, the North Korea issue has been elevated to the highest priority in Sino-American relations. Trump administration officials miss no opportunity to press their case. The secretary of state used his first UN speech to urge countries to downgrade diplomatic relations with North Korea, while making it clear that the United States would penalize third-party countries that do not comply with UN sanctions. He repeats these messages to all of his Chinese counterparts.

In a sign of well, impatience, Tillerson told the assembled that they were losing time and that there would be “catastrophic” consequences should North Korea demonstrate the ability to put a miniaturized nuclear warhead on a long-range missile and test that missile. He made this statement a day after Trump spoke of the possibility of major war with the DPRK should diplomacy and pressure fail. Beijing and Pyongyang are listening.

Third, there are the ongoing shows of force in Northeast Asia. The USS Carl Vinson Strike Group is conducting a series of deterrent exercises, including with the Japanese Maritime Self-Defense forces and Republic of Korea forces. U.S. bombers have been doing flyovers around the peninsula. The Terminal High-Altitude Area Defense system is now operational in South Korea, despite China’s temper tantrum of opposition.

CIA director Mike Pompeo is wrapping up his South Korea trip, following trips by Secretary of Defense Mattis, Secretary of State Tillerson and Vice President Pence. Pompeo made a point of visiting Yeonpyeong Island, the site of a conventional attack by North Korea on its southern neighbor in 2010.

Indeed, the United States has deployed and exercised so much coercive force that China is calling for U.S. restraint. It is hard to think of a time when China called for U.S. restraint in the last year—it was always quite the reverse. Chinese nervousness about potential U.S. actions has strategic advantages beyond the peninsula.

Secretary Mattis, who is overseeing the military side of the strategy, made Northeast Asia his first stop. There, he warned of an overwhelming response to North Korea’s use of nuclear weapons. After a special briefing at the White House for U.S. senators, Democratic Senator Christopher Coons told the press, “It was a sobering briefing in which it was clear just how much thought and planning was going into preparing military options if called for, and a diplomatic strategy that strikes me as clear-eyed and well-proportioned to the threat." All relevant parties know that the threat of force, should pressure and diplomacy fail, is real and credible.

While the Trump administration is re-establishing coercive diplomacy in impressive ways, there have been missteps. Raising the issue of who pays for THAAD was ill advised and counterproductive. Except to reassure South Koreans headed to the polls that war isn’t inevitable, it does nothing right now to suggest a meeting with Kim Jong-un. With serious staffing delays at State and DOD, a few dedicated civil servants and political appointees are overstretched.

And, as President George W. Bush learned, presidents can get carried away with their personal relationships with their Chinese counterparts. The Chinese are masters at romancing the United States to keep it close, while also undermining American interests. The two countries still have major disagreements over Taiwan, the South and East China Seas, and the general attempt by China to dominate the Asia-Pacific. Finally, North Korea’s horrific human-rights abuses should be highlighted at every turn to help build a global coalition against a truly evil man.

But the Trump administration inherited a mess. China had been fast losing respect for the United States as it continued to ignore its sanctions commitments and build and militarize new territories in the South China Sea. Obama’s red-line fiasco in Syria did untold damage to U.S. credibility, with Japan still in disbelief that chemical weapons were used with impunity. The U.S. military has been utterly decimated over the last eight years and is still straining to meet its global commitments.

The administration is doing the best it can with the cards it was dealt. The strategy of placing maximum pressure on both China and North Korea, as well as enforcing a global crackdown on trade with North Korea, is anything but strategic patience. And Trump is subtly putting the onus on China to deliver—thereby setting them up for embarrassment if they fail. If the Chinese Communist Paryt looks weak or feckless in handling its troublesome ally, the Chinese people will exact a price.

The United States is clearly showing signs of impatience, and the players that matter know it.