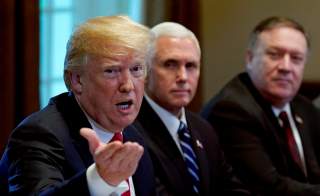 Remember the days when any sign of growing tensions in the Middle East, not to mention a new act of violence involving Arabs and Israelis, would have immediately triggered pressure on Washington to “do something” as soon as possible.

Doing nothing, U.S. officials were warned, could risk a full-blown regional war, outside intervention by global adversaries, oil embargoes, the collapse of pro-American Arab regimes, the survival of Israel, and perhaps even the end of the world as we know it.

As the rest of the nation’s international and domestic problems would be placed on the policy backburner, the U.S. president would make urgent phone calls to Middle Eastern leaders, as he and the rest of Washington would consider sending the Marines, dispatching American envoys to the Middle East, launching another “peace process” and perhaps even convening another “peace conference.”

This kind of American diplomatic hyperactivity in the Middle East would be followed by the deployment of U.S. peacekeeping troops and the provision of huge financial assistance packages, with the Americans being drawn into never-ending efforts to resolve unresolvable conflicts, continuing to raise the costs of U.S. intervention in the Middle East.

And you could always count on America’s European allies, in another demonstration of their free-riding on American power, to press the United States to “do something” and then criticize Washington’s policies as a way of pandering to the Middle Easterners (“See, we aren’t as pro-Israeli as the Americans”).

Hence, what started as the Israeli plan to do regime change in Beirut and oust the Palestinian Liberation Organization from Lebanon in 1982, forced the Reagan administration to intervene directly in the Lebanese civil war, including by deploying American peacekeepers. That, in turn, resulted in the killing of 241 U.S. peacekeepers and fifty-eight French peacekeepers by terrorists with ties to Iran—and to a humiliating American withdrawal from Lebanon.

More recently in 2006, when then Secretary of State Condoleezza Rice was in Malaysia, attending a major security forum hosted by its allies in Southeast Asia, the trip to Kuala Lumpur proved to be nothing more than a short stopover in between her extensive and more important efforts to deal with the mounting violence in the Middle East.

As she tried to bring a cease-fire in the war between Israel and Hezbollah in Lebanon, which resulted in hundreds of casualties and appalling destruction in Lebanon and in northern Israel, her mission of finding ways to deal with the challenges that China was posing the U.S. interests in Southeast Asia was relegated to the bottom of her agenda.

So perhaps Americans should be experiencing a certain sense of pleasure, or Schadenfreude as they watch the Russians being drawn into what could prove to be a long and costly effort to “do something” in response to the growing military tensions between Israel and Iran and its allies in Syria, the Kremlin’s Middle Eastern protectorate. Good luck with that, President Putin!

That the United States isn’t finding itself now at the center of the civil war and Syria and being forced to pay high military and financial costs of managing it, has been decried by members of Washington’s foreign-policy establishment as “isolationism” and the abandonment of U.S. “leadership” in the Middle East, as they warn that Russia would soon be establishing its “hegemony” and force the Americans out of the region.

While no one will be forcing the United States out of the Middle East anytime soon, it is true that under both former President Barack Obama and his successor in office, President Donald Trump, the decision not to intervene directly in the civil war in Syria, can be seen as part of an effort to reduce the level of U.S. military intervention in the Middle East. That does not amount to “isolationism” but it certainly challenges the axiom that Washington is required to immediately “do something” to resolve this or that conflict in the Middle East.

President Obama may be an “internationalist” and President Trump is considered a “nationalist,” but in a way, they both seemed to share a common interest in trying to disengage the United States from the Middle East, which reflected the post–Iraq War sentiments of the American people. They both seemed to be delivering the message, that if something bad happens in the region, then no one can depend on the Americans to come to the rescue.

Obama, who was born in Hawaii and spent part of his childhood years in Indonesia, and who was being described as the first “Pacific” U.S. president, insisted that he was committed to start reversing or “rebalancing” Washington’s geostrategic focus from the Middle East and towards East and South Asia.

First, he has taken steps to disengage the United States from the mess in the Middle East, starting with his decision to withdraw U.S. ground troops from Iraq while strongly resisting pressure from the foreign-policy establishment in Washington to launch a military intervention in Syria to bring an end to the civil war in that country.

In addition, the Obama administration was doing everything in its power to reduce the costs of American involvement in the Middle East, by accommodating what it had seen as the forces of change of the “Arab Spring” even if that meant abandoning long-time military allies like former Egyptian President Hosni Mubarak.

And, finally, it also embraced a policy of diplomatic detente vis-a-vis Iran, negotiating a deal with Tehran that resulted in the suspension of its nuclear military program, and thus averted a potential military confrontation with that Middle Eastern country.

The U.S. détente with Iran was seen by President Obama as part of a wider strategy that encouraged the creation of a new balance of power system in the Middle East into which Iran would be integrated and find ways to coexist with Saudi Arabia and the other Arab-Sunni states.

While President Trump rejected the idea of accommodation with Iran, he, like his processor, insisted that the United States should start reducing the costs of its intervention in the Middle East, and that it should certainly give up the fantasies of regime change and democracy promotion there.

Although President Trump has yet to state a coherent foreign-policy doctrine (something that he shares with his predecessor), it seems that his idea of U.S. disengagement from the region has been to support Saudi Arabia and the other Arab-Sunni states and Israel to encourage them to use their military power to contain what they considered to be an Iranian threat to their security. At the same time, he supported allowing the Russians to establish some sort of stability in Syria, and make it possible for the United States to end its military presence in the Levant now that the Islamic State has been defeated.

It is interesting to note that many officials and pundits in Washington continue to operate under the belief that what happens or would happen in the Middle East, including the prospects for a military confrontation between Iran and Israel, depends on what the United States says and does.

Hence, the notion that the U.S. decision to withdraw from the Iran nuclear deal accelerated the military tensions between the Iranians and Israelis (because the Iranians were supposedly “humiliated” and the Israelis were “emboldened” by Trump’s abrogation of the 2015 accord.)

In fact, both sides are being driven by other considerations (Iran’s interest in exerting its influence in the region; Israel’s concerns over Iranian military presence across its border with Syria), and nothing that Washington would do is going to change their respective strategic calculations, short of deploying U.S. troops to Syria.

But this time around, the global actor that needs to be worried about the possibility of a military confrontation between Iran and Israel in Syria is Russia that recognizes that that could threaten its evolving Pax Russiana in the Levant.

President Putin would, therefore, need to use Russia’s military and diplomatic power, including his close personal ties with the Israeli and Iranian leader, to prevent that from happening. As the Americans learned in the past, that kind of diplomacy ends up being the target of criticism by all the major players, as Putin discovers that he has no choice but to bribe the Iranians and the Israelis, without receiving any gratitude from either side.

If Putin succeeds in his efforts, and convinces the Iranians and the Israelis to adhere to a set of rules of engagement in Syria. he would win a few diplomatic brownie points for averting an Iran-Israel war. If he fails, Russia and not the United States would be blamed the ensuing mess this time, allowing the Trump Administration to pick up the pieces, if it so desires.

But isn’t the withdrawal of the United States from the Joint Comprehensive Plan of Action (JCPOA), and the tough posture the Trump Administration has embraced in dealing with the Islamic Republic, run contrary to President Trump’s goal of reducing U.S. military presence in the Middle East since it supposedly would lead to a confrontation between the United States and Iran?

That is not necessarily the way President Trump sees it. He is counting on the Saudis and the Israelis, joined by Egypt, Jordan and the other Arab Gulf states to stand-up to the Iranians, by using their enormous military power to mention the high financial resources at their disposal, with the United States providing indirect intelligence and military assistance, and ready to intervene only as the “balancer of last resort.”

At the same time, while much of the conventional wisdom has been that the opposition to revoking the by America’s European allies is driven by their business interests in Iran, the fact is that they, and in particular France and the other southern European countries, are even more concerned about the more direct threat that a nuclear Iran and its ballistic missiles could pose to their security. That explains why France was insisting on tougher restrictions on Iran during the negotiations over the JCPOA, and why French President Emanuel Macron is interested in working on some sort of a compromise that would prevent the Iranians from restarting their nuclear military program. He is fully aware that only the United States could guarantee such a deal.

That does not mean that like President Obama before him, President Trump would not find it difficult to juggle the many parts of his Middle East policy, especially when it comes to his vision of an Arab-Israeli military alliance. That would require some sort of an agreement on the Israel-Palestine issue, which could force Washington into another round the hyper Middle East diplomacy. In fact, in the face of rising violence on the Israeli-Palestinian front, he may soon find that he has no choice but to, well, “do something.”